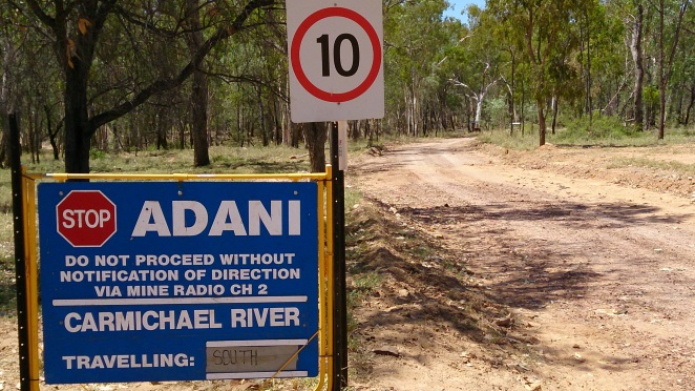 Friends of the Earth France and its international partners today welcomed the commitment from the three top French banks - BNP Paribas, Crédit Agricole and Société Générale - that they will not participate in the financing of multi-billion dollar coal projects slated for development in the Galilee Basin in Australia (1). The NGOs that have pressured the French banks not to get involved in these highly controversial projects are now calling on the banks to commit by December 2015 to putting an end to their financing of the coal sector completely.

BNP Paribas, Crédit Agricole and Société Générale recently disclosed to FoE France that they will neither participate in the financing of the mega coal mining projects located in the Galilee Basin, nor will they finance any associated infrastructure. These commitments go further than those from a further eight international banks that committed last year not to finance the expansion of the Abbot Point coal export port (2) that threatens the Great Barrier Reef.

The climate issue is central to these decisions, campaigners believe. Taken together, the Galilee Basin projects in question are potentially the second biggest area of fossil fuel energy development in the world after China, and if realised would emit annually nearly as much CO2 as Germany, the world's sixth largest CO2 emitting country (3).

Responding to the move from BNP Paribas, Crédit Agricole and Société Générale, Lucie Pinson from Friends of the Earth France commented:

"This is the first time that banks are committing to not finance projects in a whole region because of their environmental and climate impacts. The climate fight does not end here though. As welcome as these Galilee Basin commitments are, they are still a long way from reversing the 218% growth in French bank financing of the coal sector between 2005 and 2013. We will continue to put pressure on the banks to quit coal for good."

According to FoE France, the three top French banks remain deeply involved in coal projects. All three feature in the top 25 financiers of the coal sector internationally, with BNP Paribas and Société Générale the fifth and seventh banks respectively in financing coal mines in Australia (4). Altogether BNP Paribas, Crédit Agricole and Société Générale have been responsible for 94% of the 30 billion euros of French financing to the global coal sector in the period 2005 to April 2014 (5).

The French banks' commitments not to finance coal projects in the Galilee Basin were obtained following extensive engagement work carried out by FoE France with the support of more than 50 international NGOs (6).

"The decision from the French banks is yet more evidence that investments in the coal sector are now extremely risky. The financing of one of the main energy sources responsible for climate change can also severely damage the reputation of big banks, particularly in France which will host the United Nations Conference of the Parties on climate change in December this year. It will now be the turn of Australian banks, particularly the Commonwealth Bank, and Standard Chartered, already involved in Adani's Carmichael project (7), to feel the pressure from international civil society over their refusal so far to pull out of the Galilee coal projects."

After Société Générale's withdrawal last December from the Alpha Coal project, one of the nine Galilee Basin projects, the commitments from BNP Paribas, Crédit Agricole and Société Générale mark a first step toward fossil fuels exit.

Lucie Pinson commented: "But we need to speed ahead. Other coal projects could see the light of day thanks to French banks, but 88% of the world's total coal reserves must stay in the ground if we want to stay under the 2°C threshold. It is imperative that French banks commit this year to ending their financing of the coal sector." (8)

Friends of the Earth France is calling on the customers of major banks to relay this demand to their banks on a dedicated website: jechangedebanque.eu (9).

(1) The official letters from the French banks are available on this page.

(2) Eight international banks have already committed not to finance the extension of the Abbot Point port: Deutsche Bank, HSBC, RBS, Barclays, Citi, Morgan Stanley, JPMorgan Chase and Goldman Sachs. With the exception of Barclays, these commitments concern the Abbot Point port while the commitments from the French banks concern the nine mining projects of the Galilee Basin along with their associated infrastructure - including ports like Abbot Point, railways and potential power plants that would be used to power the mines.

(3) According to the reports "Point of No Return" and "Cooking the climate: Wrecking the Reef" from Greenpeace.

(5) According to data from Friends of the Earth France and BankTrack - see the reports "Charbon: l'argent sale des banques françaises" published by FoE France in October 2014, and the BankTrack report "Banking on Coal 2014" published at the same time.

(7) According to the Australian Financial Review's article "Adani's week of positives in an anti-coal atmosphere", November 19, 2014.

(8) Friends of the Earth France is calling on French banks to commit not to finance coal fired power plants projects in Bangladesh (Rampal project) and Indonesia (Batang project), the Plomin C coal power plant in Croatia and future coal projects in South Africa, including one being promoted by GDF Suez. We are also calling on Crédit Agricole to put an end to its advisory mandate for the Promin C project and for its support to Mountaintop removal mining. See the article "The geographical distribution of fossil fuels unused when limiting global warming to 2 °C"" published in Nature on 8 January 2015 for the 88% figure.

(9) The website is available at: jechangedebanque.eu, a mobilisation website inviting bank customers both to call on their banks to change their practices towards supporting an energy transition based on an exit from fossil fuels, and to switch banks if their own one continues to finance climate damaging projects.