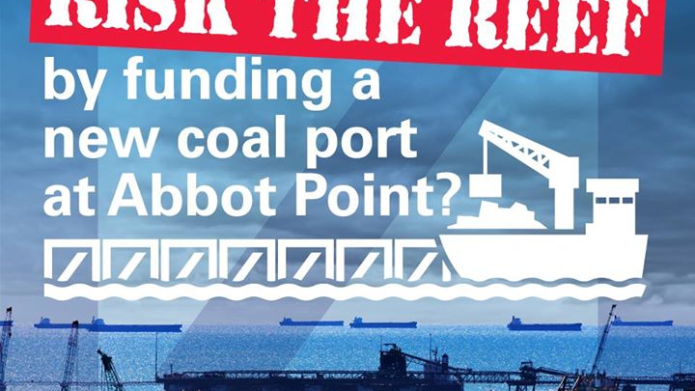 In November 2013 Deutsche Bank joined with Commonwealth Bank and Westpac to loan Adani $1.2 billion for Abbot Point, a 50 million tonne per year coal export terminal in the Great Barrier Reef World Heritage Area. The loan had already been refinanced twice since Adani bought the terminal in 2011, but this time around a raft of banks left the deal including Axis Bank, ICICI Bank, Standard Chartered, Mitsubishi UFJ, Mizuho and National Australia Bank. We don't know why Deutsche Bank suddenly showed this appetite for financing a coal port at half capacity at the end of a coal boom, especially with so many other banks walking away, but it makes it far more likely that Deutsche will be one of the banks approached to fund Adani's major coal export expansion plans.

Adani's big plans for the Galilee Basin and Abbot Point.

Adani has Queensland Government approval to construct a 60 million tonne per year coal mine in the Galilee Basin. This would make their mine twice the size of Australia's biggest coal mine to date. Connected to the mine is a rail line and port development at Abbot Point. Should these projects proceed, they could open the door to additional mines that bring the total mined output from the Galilee Basin to over 300 million tonnes per year of new thermal coal - enough to increase global greenhouse gases by almost 1 billion tonnes of CO2 per year.

Aside from the obviously unacceptable climate implications of the Galilee Basin mines proceeding, other notable environmental impacts include:

The World Heritage Committee has become extremely concerned at the state of the Great Barrier Reef World Heritage Area and its management, in particular the ongoing approvals for coastal developments that would impact the Reef's Outstanding Universal Value as a World Heritage site. The recent report from the Committee cited the 3 million cubic metres of seabed that would be dredged and dumped at sea to make way for new coal terminals at Abbot Point as especially disappointing and will consider placing the Reef on the World Heritage ‘in Danger' list in 2015.

Our biggest concern is that having developed a relationship with Adani in support of the current coal export terminal, Deutsche Bank will be far more likely to be approached for future coal mining and export projects being pursued by Adani.

In May 2014, Market Forces is joining major global environment groups to pressure Deutsche Bank over their fossil fuel investments and call for a commitment that they won't fund another coal export port at Abbot Point.

Please help out efforts: click here to tell Deutsche Bank to stop finding dirty fossil fuels and start by getting out of Abbot Point!

Deutsche Bank has loaned about $600 million to the fossil fuel industry in Australia since 2008. While that's fewer projects than other international banks, Deutsche Bank seems to have chosen to support some of the most destructive and controversial in Australia. Since 2008, DB has provided debt finance to:

Has Deutsche Bank read its own research?

In May 2013, Deutsche Bank released a Commodities Special Report "Thermal Coal: At a Crossroads". It observed that softening demand for coal in the US, EU and China would lead to an oversupplied market, the bear case they present resulting in coal costs in 2020 of $86/tonne in nominal terms. This is in line with many other predictions from the likes of HSBC, Citi and Bernstein forecasting an oversupplied market, weakening demand and lower coal prices, making future investments in the Galilee Basin coal mines or associated infrastructure a risky economic bet in addition to an environmentally unacceptable one.