Home › News
Investment warning regarding PT SIL
This Indonesian palm oil company operates illegally and is involved in land grabbing.
By: Friends of the Earth Europe and Banktrack
2014-09-26
Nijmegen 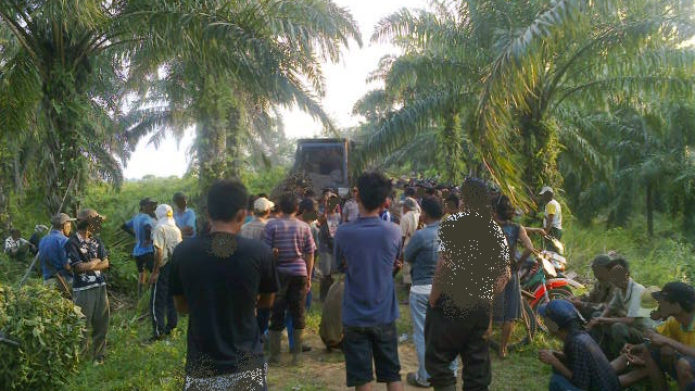 The following is an investor alert sent by BankTrack to financial institutions and investors on Friday 26th September 2014:

We are very concerned about the information we are receiving from indigenous leaders from the Seluma district, in the Bengkulu province, Sumatra, Indonesia, about the growing land conflict between their communities and the palm oil company PT Sendabi Indah Lestari.  Two days ago, the company forcefully displaced several families from their homes.  In protest, community  members seized some of the company's heavy equipment and as the conflict escalated, the police arrived in heavy numbers.

PT SIL operates illegally as its HGU, the permit that allows it to explore a concession, expired in 2012. The Land Authority Body did not renew the HGU and therefore the company lost the legal basis to explore the land. The principal permit that PT SIL holds does not give it the right to explore, and certainly not to own the land, as is confirmed by the letter from the Governor of Bengkulu Nr.700/II/BPP/2004 and Government's Regulation Nr 11, from 2010. The communities hold land titles and are therefore the legal owners of the land.

PT SIL is  applying a series of intimidation techniques to remove the indigenous communities from the land it has grabbed. In the Seluma concession, it has already displaced more than 400 families and destroyed their houses, with the  goal to eradicate the village of Minggir Sari. Backed by the police, it dug a deep canal through the community's rice fields last year. This puts the community's food security at risk, as the drained fields become unproductive. The police has also repeatedly arrested community members with a variety of charges, to intimidate them. This happened again on September 12th, when two people were arrested while harvesting fresh fruit bunches on their own land. They were released again, but have to report to the police twice a week, which is a heavy burden for them, both economically and time wise.

We are investigating which financial institutions and companies are linked to PT SIL, but in the meantime, we urge you to check if your bank or company has any financial or commercial relations with PT SIL or its mother company, the Indonesia shipping company  PT. Gurita Lintas Samudera.

If you do, we ask you to urgently use your influence with the company to halt the conflict.

Friends of the Earth Europe

Friends of the Earth USA