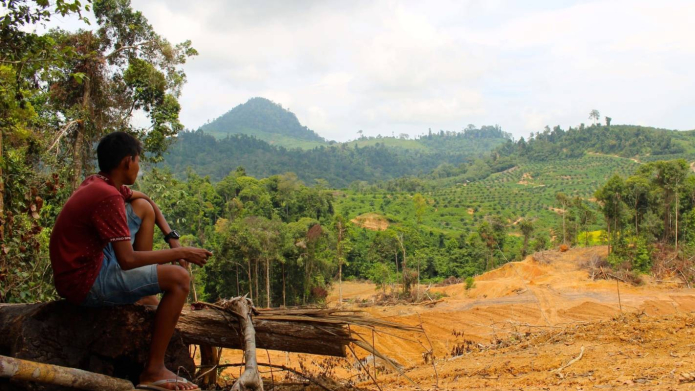 PALM OIL: The world’s most prevalent vegetable oil is the main cause of deforestation in Indonesia and Malaysia. Photo: Photo: Forest Heroes

While Nordic governments have taken a strong public stance against deforestation, major banks and pension funds in the region - including the Norwegian government’s own pension fund - have invested more than US $2 billion in six Southeast Asian banks that finance more than 50 percent of Indonesia’s rainforest-ravaging oil palm operations, according to a new report released today from Rainforest Foundation Norway.

“Evidence that Norwegians and Swedes are indirectly supporting an industry that has destroyed huge tracts of rainforest is hard to square with this region’s reputation as a global leader in the fight against deforestation,” said Vemund Olsen of Rainforest Foundation Norway, which produced the report together with Aidenvironment and the Fair Finance Guide. “It’s a sobering reminder of the powerful economic forces propelling Indonesia’s palm oil industry and rewarding companies that adopt a scorched earth approach to palm oil production.”

Last year, Norway attracted international praise when it banned deforestation by embracing a procurement policy that it promised would ensure government purchases did not contribute to deforestation. Norway also has supported international efforts to conserve the world’s remaining rainforests and protect human rights in forest communities.

But the report shows several of Scandinavia's largest banks and pension funds - including the Norwegian Government Pension Fund Global (GPFG), Nordea and the Swedish AP-fonderna - own shares in six Southeast Asian banks that back palm oil operations linked to rainforest destruction, human rights violations and greenhouse gas emissions. GPFG by itself has contributed US $1.3 billion to the Asian banks, none of which require palm oil companies they bankroll to avoid deforestation or respect land rights. Other sources of Nordic funds are Swedbank, Handelsbanken, KLP, Storebrand, Länsförsäkringar, Skandia, Danske Bank, SEB and DNB.

A series of investigations from Rainforest Foundation Norway and other experts has linked palm oil production in Indonesia to an astonishing assortment of bad outcomes for people, wildlife and the environment. They include rapid loss of biodiversity and habitat that supports endangered species such as orangutans and tigers; huge carbon emissions from fires and loss of carbon-rich peatlands that contribute significantly to climate change; land grabs that impoverish local communities; deplorable working conditions that routinely include child and forced labor; and air pollution that causes chronic respiratory ailments and premature deaths.

Southeast Asian backers of palm oil production that are key recipients of Nordic investments include Indonesia’s four largest banks - Bank Mandiri, Bank Rakyat Indonesia (BRI), Bank Negara Indonesia (BNI) and Bank Central Asia (BCA) - and two from Singapore, Oversea-Chinese Banking Corporation Limited (OCBC) and DBS Bank. The report reveals that the four Indonesian banks account for half of all lending supporting palm oil production in Indonesia, with some US $12.5 billion in outstanding loans. The Singapore banks do not publish details of their palm oil investments, but other sources, including financial records from 16 publicly-traded Indonesian palm oil companies, revealed OCBC and DBS were among the industry’s largest lenders.

The report acknowledges that several Indonesian palm oil producers have committed to avoiding deforestation and respecting the land rights of indigenous people. But it notes that the costs of compliance have provided an opening for more unscrupulous companies to gain a competitive advantage, because the banks that fuel their operations have no requirements about avoiding environmental damage or respecting human rights.

“These banks are a major part of the palm oil problem because they are funding destructive and unethical palm oil ventures while their narrow financial interests, which favor rapacious producers over more responsible companies, undermine efforts to make the industry more sustainable,” said Vemund Olsen.

In recent years, Scandinavian banks and funds have endeavored to sever direct ties to palm oil companies that are complicit in forest destruction and land grabs from indigenous communities. But the report notes they have not taken the next step to monitor what other institutions are doing with their investments.

“It’s time for Scandinavian banks and pension funds to follow the money and pledge to withdraw investments in banks that support destructive palm oil ventures,” said Jakob König of Fair Finance Guide Sweden. “We cannot be a credible leader in the fight to preserve the world’s rapidly dwindling rainforests when so much Nordic money is so closely tied to rainforest destruction.”

The report calls on Nordic asset managers to demand that Southeast Asian banks “adopt and enforce No Deforestation, No Peat, No Exploitation (NDPE) financing policies as a prerequisite for continued investment.” It also urges Nordic asset managers to increase their influence over the Asian banks by developing partnerships with colleagues around the world, such as the leaders of the giant Vanguard and Blackrock funds, and encouraging them to embrace NDPE policies.