Home › News
Investing in a Green Belt and Road? Assessing the Implementation of China’s Green Credit Guidelines Abroad
The Chinese government has become an unexpected leader in pushing for new green credit policies, but are Chinese banks doing their part to keep the belt and road initiative green?
By: Friends of the Earth US
2017-12-13 Share this page: 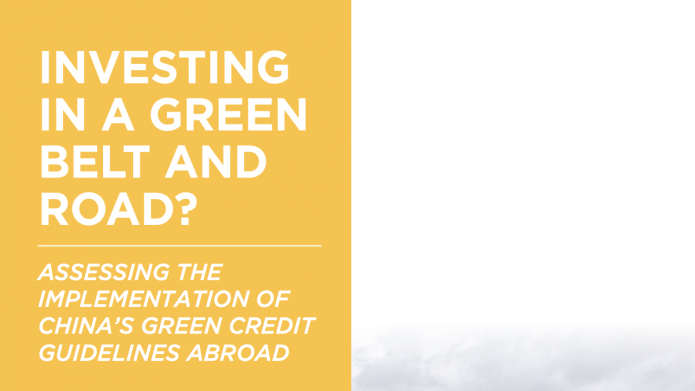 Photo: Friends of the Earth US

In 2012, China’s Green Credit Guidelines (GCG) set a precedent in the world of sustainable finance by obligating banks to comply with host country law and international norms in their overseas lending. Five years since its publication, the GCG still stand as one of the most progressive sustainable finance policies in the world. However, implementation remains a key challenge.

In 2013, China announced the Belt and Road Initiative (BRI), a national strategy calling on Chinese industries to invest in economic corridors from China to Southeast Asia, Africa, Central Asia, and Europe. It will involve more than 60 countries, which is roughly 60 per cent of the world’s population, and may cost nearly 5 trillion USD. These Chinese overseas investments will span across a variety of sectors, including shipping, mining, energy, and infrastructure.  The BRI is a major underpinning of China’s economic reform. According to the Chinese government, it is intended to promote development in not only China but around the world. As a result, this second wave of Chinese industries expanding and shifting overseas may indeed lead to increased economic opportunities, but it may also trigger a surge of harmful environmental, social, and climate impacts.

The BRI will be financed by a variety of Chinese, host country, and international institutions, but Chinese banks in particular will play a major role as the financial backbone of the initiative. This also means that Chinese banks are well placed to play a proactive role in helping to keep clients accountable to projects’ environmental, social, and climate impacts.

Promisingly, in 2014, Chinese bank regulators published key performance indicators (KPI) to help banks monitor and measure their implementation of the Green Credit Guidelines. These KPIs provided needed guidance as to how banks should categorize risky projects, when banks should suspend financing, and which international norms and standards should be observed in overseas projects, among other important metrics. Currently, however, banks are only required to assess their level of green credit implementation on an institutional and not project level. Moreover, the BRI further highlights the need for Chinese banks to monitor and measure their environmental and social performance in overseas investments, as required by Chinese banking regulators.

The Green Credit Guidelines offer China and its banking sector a unique opportunity to make good on their commitment to invest sustainably. But according to our report findings, Chinese banks continue to struggle to meet their obligations to comply with host country law and international norms and standards in their overseas investments.

Additional Resources from Friends of the Earth U.S.