This profile is no longer actively maintained, with the information now possibly out of date
Send feedback on this profile
Download as PDF By: BankTrack
Created before Nov 2016
Last update: 2016-10-07 04:44:50 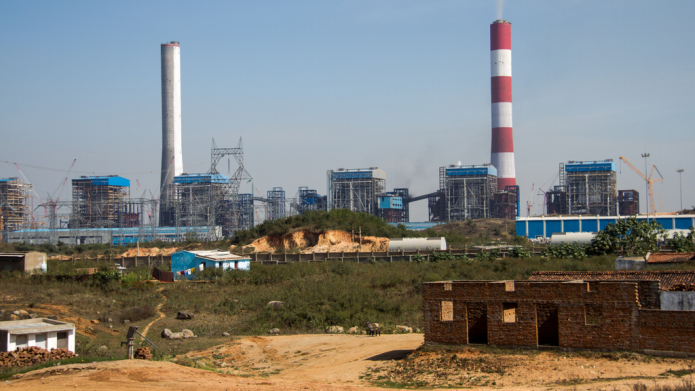 The Sasan project, also known as the Sasan Ultra Mega Power Project (UMPP), is a 3,960 megawatt (6x660 megawatt) coal-fired project, located in Sasan, Madhya Pradesh in India. This initiative of the Government of India is run by Reliance Power. UMPPs are coal based power plants that produce around 4,000 megawatt, making them some of the largest sources of greenhouse gas emissions in the world. Sasan was the first UMPP awarded in India. As of March 2015, the sixth and last unit was commissioned, bringing the total capacity of the plant to 3,960 megawatt. The total investment amounts to USD four billion.

Sasan UMPP is a pit-head power project, which has been allocated three captive coal mine blocks: Moher, Moher Amlori extension and Chhatrasal. Reserves are in excess of 750 million tonnes. Plans for development of these mines were prepared and approval was obtained in a record period of seven months. Together, the mines will produce 25 million tonnes of coal each year, making these mines among India's largest. Coal production has commenced from the Moher and Moher Amlori mines.

The project achieved financial closure in April 2009. The lenders for the project are a consortium of banks led by State Bank of India, the country's largest bank. The lending was done on a project finance basis and with an estimated project cost of around INR20,000 crores (USD four billion) with a debt-equity ratio of 75:25, making it the largest debt on project finance basis across industries in India.

As the Sasan plant will be responsible for emitting large amounts of CO2, financial institutions should withdraw their project fundings and instead relocate these investments into renewable energy sources.

Environmental, social, and economic impacts have been outlined in the ESIA:

The entire process of land acquisition has been marred with false promises and coercion. Procedures on land acquisition on the part of the company have been completely disregarded. Community's property has been destroyed before the clearance and acquisition processes were complete, as has happened in the village of Harrahaawa.

Land has been acquired from Adivasi, Dalit and "backward" communities at low prices. Families protesting the acquisition were arrested by the police to force the selling of land. The affected families have not been adequately rehabilitated. There has been a violation of Madhya Pradesh Rehabilitation Policy 2002 which stipulates mandatory employment in the project for one person of every displaced family. The rights of people were not recognised according to the Forest Rights Act 2006. There has been acquisition of land without proper consent from gram sabhas (local village communities).

Many families are still located in temporary housing and are still waiting to be moved to a permanent location.

Reliance is applying for carbon credits through the United Nations Clean Development Mechanism (CDM), because it is "employing more efficient super critical coal technology." This represents a serious misuse of the CDM which is meant to stimulate investments in clean energy for sustainable development. The CDM Executive Board rejected a similar application for the first UMPP, the Tata Mundra in India. Clearly demonstrating that these projects are not the investments in sustainable development that are so desperately needed.

The shutdown of the Sasan plant may be imminent. The operation of Reliance Power's 3,960 megawatt power project in Madhya Pradesh may need to shut down if it is not allowed to mine coal in excess of the cap set by the Centre, the company told Delhi High Court today.

NEW DELHI: The government has issued a gazette notification to cancel allocation of one of the coal mines attached to Reliance Power's Sasan ultra mega power project (UMPP) and withdrawn the permission to use excess coal in two other mines to fire another power plant of the company.

The Sasan UMPP is now the world's largest integrated coal power plant and coal mining project in a single location in the world. Its sixth and last unit went operational at the end of March, adding another 660 megawatt to bring the total capacity of the power plant to 3,960 megawatt.

The Inspector General of the U.S. Ex-Im Bank has announced that the bank is investigating its financing of the Sasan UMPP. The project has received USD650 million in 2010 from the Ex-Im bank. The announcement comes after the release of a report titled "The U.S. Export-Import Bank's Dirty Dollars" on October 20 by the Sierra Club and 350.org amongst other groups.

According to Sierra Club: the toll coal makes on communities across India is staggering: 100,000 premature deaths annually, a USD33 billion "coal-gate" scandal, and financial collapse that is pushing plants to the brink of bankruptcy, but only after families have been forcibly evicted to make way for deadly projects. From the outside, Reliance Energy's 4,000 megawatt coal-fired power plant, under construction in Singrauli, appears no different than any other risky coal project in the country. But Sasan received over USD900 million in financing from the U.S. government through the U.S. Export-Import Bank, despite opposition from grassroots groups in India and the U.S.

The Chhatrasal mine denied permission for mining

The Chhatrasal mine was denied permission for mining in January 2012 by a committee of the MoEF as over 965 hectare of land of the proposed mine were "good quality forests" and the mine fell within MoEF's No - Go""  30 or inviolate list.

The United Nations has ruled that the Sasan UMPP project is eligible for carbon credits (worth at around USD165) under the UN's Clean Development Mechanism.

Reliance Power announced that its Sasan Ultra Mega Power Project has been registered with the Clean Development Mechanism Executive Board (CDM-EB) of United Nations Framework Convention on Climate Change (UNFCCC).

Early 2009, the Tata Power Company challenged the use of surplus coal from the captive coal mines for other projects of Reliance Power which would allow Reliance to save INR960 crore (USD208 Million) each year due to the INR240 crore (USD52 million) saved for every 1,000 megawatt capacity. Ex-Im financing for this project is therefore subsidizing this illegal use of coal. The Delhi High Court dismissed a petition on April 14 2009. However Tata Power has said the company will appeal the decision in the Supreme Court.

After a reversal of an earlier decision to follow its low carbon policy US Ex-Im bank gave approval for USD600 million in loan guarantees. The reversal came with a "compromise" between Reliance and Ex-Im to generate 250 megawatt of renewable energy on site to address low carbon policy concerns.

In 2006 Sasan Power Limited (SPL) was incorporated as a wholly owned subsidiary of Power Finance Corporation Limited . The intention was to build, own, operate and maintain the Sasan Ultra Megawatt Power Project at Sasan, Madhya Pradesh. It was transferred to Reliance Power under the provisions of a share purchase agreement dated August 7, 2007 and is now a fully owned subsidiary of Reliance Power.

Sasan plant may shut down in March for lack of coal: Reliance Power to HC

Compensatory tariffs case: Should power producers be compensated for rock-bottom bids made earlier?

Andhra Pradesh at the forefront of Indian 'coal rush'

Globalizing the Grassroots Movement Against Coal

Sasan project to be commissioned four months ahead of schedule

RPower gets nod for carbon credits

It’s not easy being green

It's Tata vs Ambani over Sasan power project

Report on the Project Financing of Sasan Power Limited

Down the Rabbit Hole - What the bankers aren’t telling you!

An Analysis of Lending Practices Adopted by Banks to Finance ‘Developmental’ Projects in India
2014-02-01 00:00:00 | The Research Collective - PSA
ngo documents

How not to conduct an inspection: US Ex-Im visit to the Sasan coal power project

The U.S. Export-Import Bank (Ex-Im Bank), the official export credit agency of the U.S. Government, is the main institution, financing this project. Ex-Im Bank initially declined to finance the Sasan project pursuant to the agency's carbon policy, which requires its board of directors to carefully consider the potentially adverse environmental impact of high-carbon intensity transactions. Noting that the Sasan plant is projected to emit close to 26,000-27,000 tonnes of carbon dioxide per year, an official statement of the board read: "after careful consideration, the board felt that the environmental impact of the facility is such that they could not support it. The environmental impact of the project would be too adverse".

However, Ex-Im Bank back-tracked on the decision following political pressure. The reversal came with a "compromise" between Reliance and Ex-Im in the form of a Memorandum of Understanding to generate 250 megawatt of renewable energy on site to address low carbon policy concerns. In exchange for this, Exim approved a USD600 million in loan guarantees to the supplier of the power project at Sasan.

The 250 megawatt of potential clean energy is, however, a small fraction of the 3,960 megawatt of power that the plant will generate. It will do little to mitigate the overall CO2 emissions and local pollution generated by Sasan. Therefore, the US taxpayer dollars are now linked to a project surrounded by legal controversy involving the sale of excess coal from the captive mines supplying the plant.