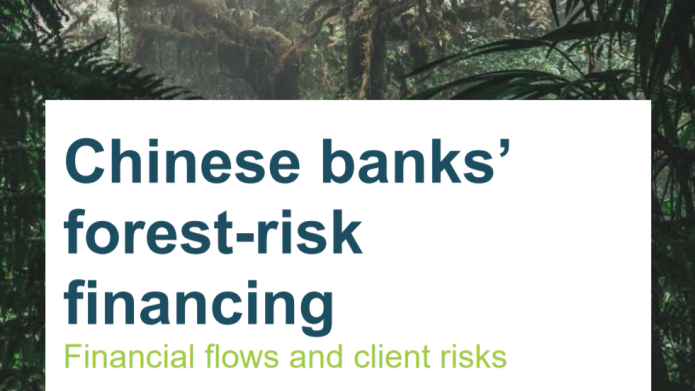 Chinese financial institutions are the world’s second-largest financier of commodities which are driving tropical rainforest deforestation, according to a new study by Forests & Finance –– a coalition of research groups and civil society organizations from the United States, Indonesia, Netherlands, Brazil and Malaysia.

“The world’s big economies talk big on climate action yet continue to turn a blind eye to their own banks funding tropical deforestation,” said Tom Picken, Director of RAN’s Forests & Finance Campaign. “China and other major economies must put their weight behind real measures to stop deforestation, protect forest communities and slow climate change – by regulating the financial sector.”

Despite China having only small areas of tropical forest itself, Chinese financial institutions are highly exposed to deforestation, and the related environmental, social and governance risks linked to their clients’ operations. A number of clients receiving Chinese bank loans and underwriting services include companies involved in illegal or unsustainable corporate practices like deforestation, peatland degradation, land and forest fires, land rights violations and bribery. In a recent evaluation by Rainforest Action Network into the policies of major banks known to be financing tropical deforestation, China’s ICBC –– the biggest bank in the world –– scored joint last for having adequate forest sector policies. The Chinese government has an opportunity to tighten the rules on banks financing deforestation through an upcoming planned revision of the Chinese law on commercial banks.

The 300+ companies included in the Forests & Finance research are a representative sample of companies impacting or causing potential harm to tropical forests, wetlands, and communities.

See this article on the Forests & Finance website here.