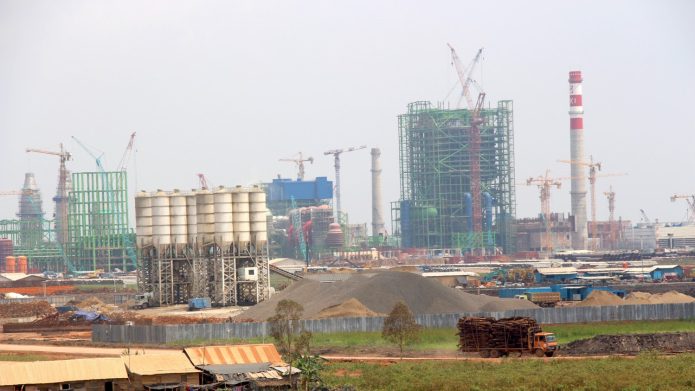 On December 23, 2016 Asia Pulp & Paper (APP) announced that it started production at one of the largest pulp and tissue mills in the world. In a joint statement released today, Wetlands International, Eyes on the Forest, Rainforest Action Network, Hutan Kita Institute, Woods & Wayside International, and Yayasan Auriga denounce the OKI mill in South Sumatra for its unacceptably high costs for Indonesia and the global environment. Read the statement.

“APP needs to acknowledge the severity of the problem and stop draining peatlands to grow trees,” said Nyoman Suryadiputra, Indonesia Country Director for Wetlands International. “This starts with a commitment to phase out all drainage-based plantations on peatlands, and a credible plan to rewet and restore those areas,” he said.

An estimated three-quarters of the mill’s plantation concessions – at about 6,000 square kilometers (2,300 square miles), an area seven times the size of Singapore – are on peatlands, according to a detailed report published last April by 12 international and Indonesian NGOs.

When drained for the development of industrial plantations, peat becomes vulnerable to fires and releases very large amounts of carbon dioxide. Indonesia has prioritized peatlands restoration and conservation in its climate change commitments.

“With buyers increasingly concerned about their carbon footprints, sourcing paper from unsustainable peatland plantations – with an emissions profile tens of times larger than any other paper on the market -- just doesn’t make sense,” said Lafcadio Cortesi, with the Rainforest Action Network.

The development of peatlands for industrial forestry and agriculture, including the supply base of the OKI mill, was a major cause of Indonesia’s catastrophic fires in 2015, which exposed 43 million people to thick haze and resulted in $16 billion of economic losses for Indonesia.

The OKI mill is financed by $2.5 billion in loans from Chinese state-owned financial institutions. The Government of Indonesia has given the OKI mill a ten-year corporate tax holiday.