Home › News
Total abuses in Uganda: French High Court of Justice declares itself incompetent in favour of the Commercial Court
By: Friends of the Earth France
2020-01-30 Share this page: 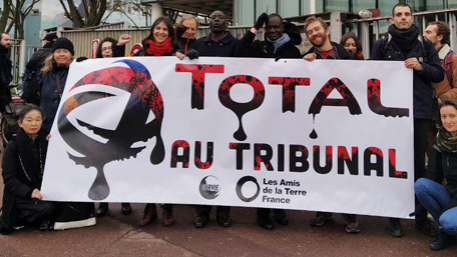 Photo: Friends of the Earth France

January 30, 2020 - The Nanterre High Court has handed down its decision on the summary proceedings brought by Friends of the Earth France, Survie and four Ugandan associations (AFIEGO, CRED, NAPE/Friends of the Earth Uganda and NAVODA) against Total related to its oil mega-project in Uganda (1). This is the first ever court decision based on the French law on duty of vigilance (2). Surprisingly, the judges considered that the case did not fall within their jurisdiction, rather it should sit with the Commercial Court. They did not, therefore, examine the organisations' demands. Friends of the Earth France and Survie contest this decision - which will also have a negative impact on future cases - and are considering appealing. Frustratingly it will take several months to obtain a decision while human rights violations in Uganda continue.

Friends of the Earth France, Survie, AFIEGO, CRED, NAPE/Friends of the Earth Uganda and NAVODA, represented by Louis Cofflard, Céline Gagey and Julie Gonidec, filed a case under summary proceedings (3) against Total for failing to comply with its new obligations under the law on duty of vigilance, and asked the court to force the company: firstly, to remedy the shortcomings in its current vigilance plan, which does not include any risk identification or specific measures concerning its activities in Uganda, and secondly to effectively implement urgent measures in response to the violations and risks of violations observed in Uganda in order to improve the situation for affected populations.

In view of the social and environmental urgency of the situation in Uganda, the six organizations had chosen to refer the matter to the summary proceedings judge of the Nanterre Tribunal de Grande Instance, which enabled a hearing to be held quickly on 12 December (4). However, the three judges hearing the case decided that the dispute sits within the jurisdiction of the Commercial Court, echoing the arguments of Total's lawyers. According to them, the publication of a vigilance plan would therefore fall within the scope of "disputes relating to commercial companies" for which only the Commercial Court has jurisdiction, regardless of whether or not the plaintiffs are companies.

The six organizations strongly disagree with this interpretation of the law. The Commercial Court is a court created to enable commercial entities (as lay judges) to render justice in disputes between corportations. The Total case involves serious human rights and environmental violations. It is therefore unrealistic to imagine that the Commercial Court is the appropriate jurisdiction for compelling Total to take the necessary measures to put an end to these abuses.

Juliette Renaud, Senior campaigner on Regulation of Transnational Corporations at Friends of the Earth France, comments:

“Not only are we extremely disappointed that we do not have a decision today forcing Total to effectively prevent ongoing human rights violations in Uganda, we also do not understand the judges’ reasoning in referring the case to the Commercial Court's jurisdiction. This is not simply a question of corporate management as Total has argued: it is absurd to believe that corporate representatives elected by their peers are the best judge of a situation where lives and entire ecosystems are threatened! Every month that passes is time wasted in putting an end to serious human rights violations perpetrated by Total with its mega oil project in Uganda, and preventing new violations from occurring.”

Thomas Bart, activist from Survie who coordinated the field investigation in Uganda, adds:

"This decision is very negative for this case, as well as for future court cases using the duty of vigilance law. The objective of prevention at the heart of the law has been entirely neglected. But the court did not rule on Total's non-compliance of its obligations, either in terms of the content of its vigilance plan or in terms of current and future violations in Uganda. So this decision does not in any way delegitimize our accusations against Total, it only prevents putting an end to the human rights violations today.”

However, Nanterre high court seems to accept jurisdiction for actions for damages that could be brought on the basis of the law on duty of vigilance. In other words, the civil court seems to believe it will only be able to judge the corporate liability in the case of damages that have already occurred, and not in the context of legal actions aimed at preventing future serious human rights and environmental violations, which, it says, should be judged by the commercial court.

It seems inconsistent, to say the least, that the same court does not have jurisdiction over all actions under the duty of vigilance law. The organizations might therefore appeal this decision.

Friends of the Earth France and Survie stress that pressure and intimidations have increased in Uganda, particularly for the two affected communities’ representatives who testified in France in December, along with a member of one of the Ugandan partner associations (5).

For more information on this project and its impacts, see Friends of the Earth and Survie's report, and the website www.totalincourt.org.

Law no. 2017-399 of 27 March 2017 relating to the duty of vigilance of parent companies and outsourcing companies.