Home › News
Why is Standard Bank embroiled in the financing of the potentially disastrous East Africa oil pipeline?
The bank’s support for the East Africa Crude Oil Pipeline, which will traverse the world-renowned Murchison Falls National Park, is a huge risk for local people, the climate and the bank itself.
By: Diana Nabiruma, AFIEGO & Ryan Brightwell – BankTrack
2020-06-18 Share this page: 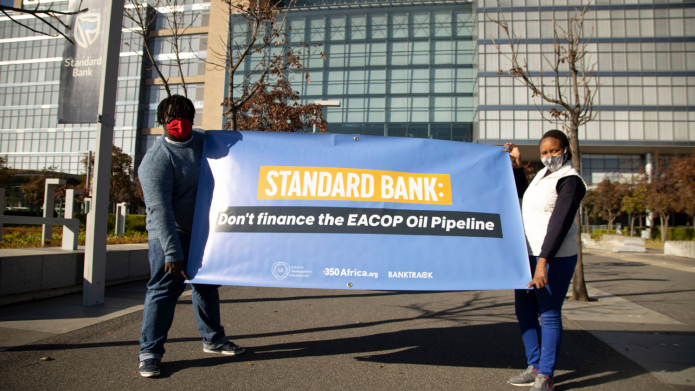 Activists from 350.org Africa hand over a petition at the Johannesburg offices of Standard Bank on the day before the bank's 2020 Annual General Meeting. Photo: 350.org/Zaheer Cassim

This article was originally posted as an op-ed on the Daily Maverick, here.

As company annual general meetings have shifted out of conference centres and onto online platforms this year, initial fears that the coronavirus crisis would sideline investor concerns about climate change have thankfully proved unfounded, and shareholder activism on climate change has instead surged.

The banking sector has been no exception to this, with independent resolutions at JPMorgan Chase and Barclays, two of the biggest bank funders of the fossil fuel industry, resulting in significant shareholder rebellions, demonstrating the extent of shareholder displeasure with these banks’ progress towards decarbonising their balance sheets.

Africa’s largest bank, Standard Bank, on the other hand, has moved to block shareholder participation and shut down debate by preventing the tabling of two independent resolutions on climate change risk. Shareholders would be right to be concerned.

The bank’s reluctance to publicly disclose information about climate risk could be linked to the huge risks it is taking in supporting a project to build the longest heated crude oil pipeline in the world – the East Africa Crude Oil Pipeline (EACOP). The project, if completed, will transport 216,000 barrels of oil a day from the oil fields of western Uganda to the Tanzanian coast, impacting communities, indigenous rights, forests, game reserves, rivers and lakes along its 1,445km journey.

For scientists and environmentalists, the bottom line is simple: new fossil fuel projects like the EACOP are incompatible with combating climate change. The Paris Climate Agreement, which Standard Bank has committed to support under the UN’s Principles for Responsible Banking, requires a managed decline of the fossil fuel industry. Yet the EACOP stands to facilitate a massive expansion of the industry, providing an export route for oil that for now remains underground, much of it beneath critical ecosystems including Murchison Falls National Park, Uganda’s oldest and one of the country’s most visited parks.

The oil carried through the pipeline, when burned, will add an estimated 34 million tonnes of carbon to the atmosphere each year – equivalent to the annual emissions of Denmark. In the context of our shared global fight to stop climate breakdown, this is reckless.

For local people along the pipeline’s route, the matter is not as straightforward. Total, the French oil major which will own the lion’s share of the project after it completes the long-negotiated purchase of Tullow’s 33.33% stake, argues the project is in the host countries’ interests socially and economically, and events have been organised to talk up the resulting business opportunities. Despite these promises, there is growing scepticism and indeed opposition to the project from local communities and organisations.

One reason for this opposition is the fact that the EACOP will cross key forests in a country that has rapidly lost its forest cover over several years. With Uganda losing about 90,000 hectares of forest per year, the loss of more forest cover to the EACOP – at a time when forests and species in Uganda must be protected to conserve biodiversity, address climate change concerns and protect community livelihoods – is alarming.

Moreover, the EACOP threatens water and food access for millions of people in East Africa. The pipeline will affect wetlands such as Katonga, a Ramsar site which is also a critical catchment area for Lake Victoria. Lake Victoria is the world’s second-largest freshwater lake on which millions of people in East Africa rely to access water, and eight million rely to access protein from fish.

In addition, for communities including 14,344 people in Uganda and Tanzania whose land was gazetted as the right of way for the EACOP, the wait for compensation is painful. In Uganda and Tanzania, the communities were, in 2019, stopped from growing perennial crops from which they make a living. This has made life and access to basic needs hard. Yet these communities have to wait for a yet-to-be-determined date at which the Final Investment Decision (FID) for the EACOP will be made before they will receive compensation.

The above is a costly and inhumane travesty. Even more costly is the loan needed to develop the EACOP. It is estimated that the EACOP will be developed for $3.5-billion, of which $2.5-billion will be borrowed from banks. With Uganda and Tanzania being already worryingly indebted with a debt-to-GDP ratio of 37% and 37.8% respectively as at December 2019, any more borrowing for the EACOP project is heavily frowned upon.

This is why a growing number of African and international civil society organisations are calling for a halt to the project. In October, six NGOs took Total to court over the human rights, climate and environmental impacts of its Ugandan operations, including the EACOP.

And, last month, 100 groups, mostly from affected countries, called on the African Development Bank (AfDB) to turn down an application for a bridge grant for the project. (The AfDB promptly announced it would not finance the EACOP project and “sees renewable energy as the future”.)  This growing opposition comes despite the security concerns that many local organisations feel they will be exposed to if they speak out.

Standard Bank, as the co-financial adviser for the $2.5-billion project loan for this project, is already linked to these emerging human rights impacts and should show how it is fulfilling its responsibilities to prevent or mitigate these.

However the loan cannot be made until the Final Investment Decision on the pipeline has been reached, so Standard Bank still has time to step aside from financing the project and direct its energy finance towards ensuring a low carbon future for the region.

With the tremendous volatility in oil prices that have coincided with the Covid-19 crisis, as well as the risks this project poses to communities, forests, wildlife and our shared climate, the EACOP does not look like a risk worth taking.