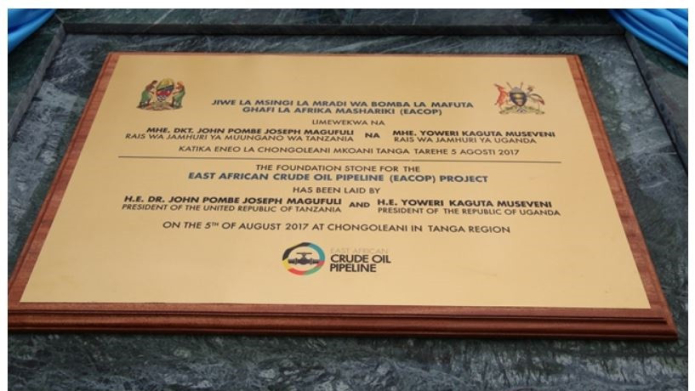 A coalition of African and international organisations is today calling on South Africa’s Standard Bank and Japan’s Sumitomo Mitsui Banking Corp (SMBC) to withdraw from their role as lead arrangers for a massive oil pipeline under construction in Uganda and Tanzania. Download the letter here.

The East Africa Crude Oil Pipeline is being developed as part of a push to open oil fields around Uganda’s Lake Albert to international markets, linking them with the port of Tanga in Tanzania. The pipeline is projected to require an investment of US$3.5 billion, and at 1,443 kilometres it will be the longest heated pipeline in the world. Standard Bank and SMBC are playing key roles advising the governments of Uganda and Tanzania and one of the lead project sponsors, the French oil company Total, and are in the process of arranging US$2.5 billion in project finance loans for the completion of the project.

Local civil society organisations have previously called for fair compensation of communities along the pipeline’s route, but this is the first time that local groups have come together to voice outright opposition to the project. Twenty environmental and social justice groups from Uganda, the Democratic Republic of the Congo, Kenya and South Africa joined ten international groups in writing to the banks, drawing attention to grave risks from the pipeline’s construction.

The risks highlighted in the letter include displacement of entire communities in the oil extraction zone and pipeline corridor, impacting up to 14,500 farms in the Tanzanian stretch of the pipeline corridor alone; risks to fresh water sources including Lake Victoria, which supports the livelihoods of more than 30 million people in the region; and severe degradation of habitats of African elephants, eastern chimpanzees and lions. The project is also being developed in a political climate in which human rights defenders and journalists expressing criticism of the project and associated facilities face harassment and threats of retaliation.

The letter also emphasises the significant climate impact of the pipeline, noting that the 216,000 barrels of crude oil expected to be carried by the pipeline daily can be expected to result in CO2 emissions of over 33 million tonnes each year, significantly greater than the combined emissions of Uganda and Tanzania. Reserves in currently operating oil and gas fields alone are already enough to send the world beyond 1.5°C of warming, the target agreed at the 2015 UN Climate Summit in Paris, meaning there is no room for the development of new fossil fuel pipelines like EACOP if this is to be met.

Landry Ninteretse of 350.org Africa stated: “At 350.org Africa, we fully support the ongoing local organising and mobilising efforts to stop the EACOP. At a time when our planet has reached the unprecedented level of 415 of CO2 in the atmosphere, which means more frequent and more intense weather events for the world and Africa where the adaptation and response capacity is very limited, pursuing investment in such a project is economically unviable, ecologically disastrous, and morally unjustifiable. The rapid transition away from fossil fuels is already underway globally and should not exclude African nations.”

Natalie Bugalski of Inclusive Development International said: “There is no greater danger facing humanity than climate change. Given the urgency of this crisis, Standard Bank and SMBC should be doing all they can to help realize the goals of the Paris Climate Agreement. Equator Banks like these should be leading the transition to a low-carbon economy, not financing fossil fuel projects that imperil the planet.”

Johan Frijns, director of BankTrack said: “By acting as lead arranger for the EACOP while simultaneously leading the revision process of the Equator Principles, Standard Bank is sending the signal that also under the new EPs projects such as EACOP will continue to be perfectly eligible for financing. This does not bode well for the future relevance of what is supposed to be a prime sustainability standard for the banking industry. It is high time that the Equator Principles categorically exclude financing for all projects that pose high risks to the world’s climate.”