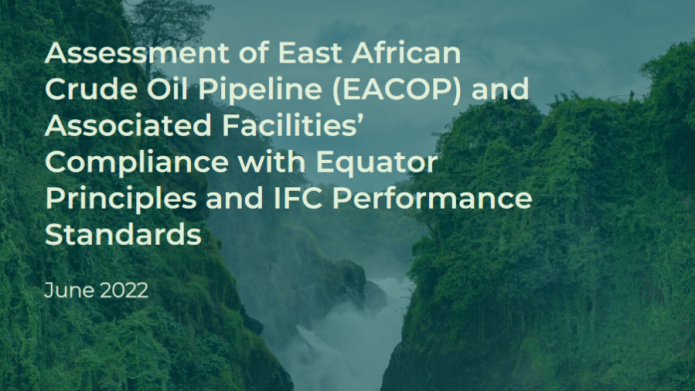 在此处下载中文报告 Note: A Chinese translation of this report is also availble.

A new report assessing the East African Oil Pipeline (EACOP) and associated oil fields against internationally recognized environmental and human rights standards for financial institutions finds numerous violations, putting banks at risk if they sign on to support the project. The assessment, undertaken by the Africa Institute for Energy Governance (AFIEGO), Inclusive Development International (IDI) and BankTrack, suggests that the project is not in compliance with many of the criteria set forth in the Equator Principles and the Environmental and Social Performance Standards of the International Finance Corporation (IFC), two internationally recognized standards for responsible finance.

“The EACOP project developers have committed to adhere to the IFC Performance and other international standards. However, while implementing the EACOP and its associated upstream oil projects, the developers have come short in complying with the standards,” says Diana Nabiruma, AFIEGO’s Senior Communications Officer.

She adds, “Communities perennially complain about being denied the opportunity to give informed consent during land acquisition processes. Many have also said that the compensation being offered to them by the developers will not restore them to their original positions. Instead, they will be left worse off. The full extent of the environmental and climate change risks and impacts of the EACOP project also largely remains unknown by host communities.”

“It is clear that the beautiful commitments to adhere to international standards are largely left on paper,” concludes Nabiruma.

The Equator Principles are a set of voluntary standards adopted by international financial institutions to ensure large scale development or construction projects effectively manage and mitigate associated social and environmental risk. The principles are largely based on the Environmental and Social Performance Standards of the International Finance Corporation, a standard-setter for responsible development.

The EACOP project is being carried out by France’s TotalEnergies, with 62 percent ownership, alongside China National Offshore Oil Corporation (CNOOC) and the national oil companies of Uganda and Tanzania. The project sponsors have committed to comply with the Equator Principles, a necessary precondition for securing project financing from banks that are signatories to the principles. According to the new assessment, they have failed to do so, putting key project financing in jeopardy.

“The findings from this new assessment raise serious questions about whether the EACOP project sponsors will be able to raise the additional $3 billion they need to construct the pipeline,” said Coleen Scott, Legal and Policy Associate at Inclusive Development International. “Already, 20 major banks have committed not to support the EACOP project, many citing environmental and human rights concerns. This new assessment will only deepen those concerns.”

Both Standard Bank and Sumitomo Mitsui Banking Corporation (SMBC), which are acting as financial advisors for the EACOP project, have signed on to the Equator Principles. Potential financiers of the project such as Standard Chartered, which is currently conducting due diligence on the project, and MUFG, the only top Japanese bank to remain silent on EACOP, are also signatories.

In total, 134 financial institutions have signed on to the Equator Principles. Findings from the new assessment suggest none of these institutions can initiate or maintain ties with the project if they want to remain in good standing as signatories. Standard Bank has publicly stated that its participation in the project remains subject to the findings from due diligence assessments of the project’s compliance with the Equator Principles, suggesting it could exit the picture soon if it follows through on that commitment.

Non-compliance with the Equator Principles is one of many reasons banks are keeping their distance from the project. BankTrack’s latest finance risk briefing underscores the many reputational, material and financial risks to financial institutions associated with the EACOP.

"This new analysis shows clearly that any bank that is a signatory to the Equator Principles would be in breach of its commitments if it proceeds with financing the EACOP," said Ryan Brightwell, Director of Communications & Research at BankTrack. "In the face of this evidence, any attempt to pass the project off as ‘Equator Compliant’ would undermine the credibility of the entire initiative."

The assessment finds that serious human rights impacts have already occurred before construction of the pipeline has even begun, including related to involuntary resettlement and threats and retaliation against community leaders and environmental defenders critical of the project.

The construction and operational phases are expected to cause additional adverse impacts, including placing at risk the water resources relied upon by millions of people, and irremediably degrading the livelihoods of farmers, fisherfolk and tourism business owners that depend upon the region’s rich natural resources. It risks causing extensive and irreversible environmental damage within Murchison Falls National Park and numerous other protected areas. This is in addition to enabling the extraction and transport of enough oil to generate up to 34 million metric tons of additional carbon emissions per year, significantly more than the current combined emissions of Uganda and Tanzania.