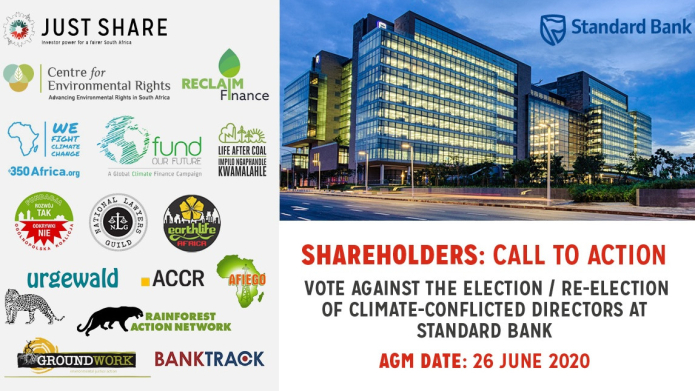 Seven of Standard Bank’s 18 board members are conflicted on climate change-related matters by virtue of their ties to the fossil fuel industry. Fourteen climate justice NGOs¹ from around the world, led by shareholder activist organisation Just Share, have called on Standard Bank’s shareholders to vote against the election/re-election of climate-conflicted directors at the upcoming AGM.

Standard Bank, Africa's largest bank based in South Africa, acknowledges that “climate risk is recognised as one of the material risks facing the group”. The bank is a founding signatory of the UN Principles for Responsible Banking (UNPRB), which “set the global benchmark for what it means to be a responsible bank”. Principle 1 of the UNPRB (“Alignment”), commits signatory banks to “align business strategy to be consistent with and contribute to individuals’ needs and society’s goals, as expressed in the Sustainable Development Goals, the Paris Climate Agreement and relevant national and regional frameworks”.

One of the Paris Agreement’s three main objectives is “making finance flows consistent with a pathway towards low greenhouse gas emissions and climate-resilient development”. The financing of fossil fuels, in particular new fossil fuel exploration, extraction and production, is not compatible with the Paris Agreement.

A large proportion of Standard Bank’s board members have ties to South African fossil fuel companies, including Sasol (the country’s biggest carbon emitter after Eskom), Exxaro and BP Southern Africa. Five of the seven directors with fossil fuel ties are up for election or re-election at the company’s AGM on 26 June. They are:

If all of the directors standing for election or re-election are elected at the 26 June AGM, directors with fossil fuel ties will represent 42% of Standard Bank’s independent directors (5/12); 47% of its non-executive directors (7/15); and 41% (7/17)² of the board as a whole. The seven board members and their ties to fossil fuel companies are set out below:

Board members with a conflict of interest are required by the South-Africa Companies Act, 2008 to declare those interests and to recuse themselves from board meetings during consideration of any matter in relation to which they are conflicted. Such conflicts include not only personal conflicts, but also those with “related parties”, which include other companies of which the board member is a director.

In these circumstances, responsible investors holding Standard Bank shares are faced with no good options: either these board members will recuse themselves, creating a corporate governance void when the board considers some of its most important strategic issues as, by the bank’s own admission, climate-related matters are; or they will not, compromising the ability of the board to provide climate-competent leadership.

In 2020, after engaging with the bank, the RAITH Foundation and Just Share formally co-filed another resolution – this time asking the bank to extend its coal financing policies to include its position on oil and gas financing. This is particularly important in Standard Bank’s case, as it is one of the biggest oil and gas lenders in sub-Saharan Africa.

To the surprise of the co-filers, Standard Bank refused to table the 2020 resolution. At first, its reason for this refusal was that the resolution was “premature”. Then, the company secretary provided a different reason for the refusal: an alleged legal technicality with regard to the ability of shareholders to vote on climate change-related matters.

Strikingly, the legal argument provided by Standard Bank’s company secretary was exactly the same as the one provided by Sasol to shareholders attempting to table climate resolutions at that company in 2018 and 2019.

Sasol bases its view on a legal opinion which it refuses to provide to shareholders. It was previously the only company to use this argument - which has not been tested in court. Furthermore, multiple climate change shareholder resolutions have already been tabled in South Africa; at Standard Bank, FirstRand, Nedbank and Absa.

Standard Bank, for example, does not disclose in its company reports that Stanbic Uganda (a Standard Bank Group subsidiary) is a lead arranger for financing of the East African Crude Oil Pipeline (EACOP), a hugely controversial project which will be the world’s longest heated oil pipeline, stretching 1,445 kilometres from Hoima in Uganda to Tanga in Tanzania and carrying 216 000 barrels of crude oil a day³.

Five of the seven climate-conflicted Standard Bank directors – Ms Kennealy, Ms Matyumza, Ms Mabelane, Ms Nyembezi and Mr Maree – are offering themselves for election or re-election to Standard Bank’s board this year.

The election of Standard Bank’s climate-conflicted board members risks entrenching a high tolerance for exposure to the fossil fuel industry for years to come. Climate justice organisations from around the world have therefore decided to shine a light on this issue, and have written to Standard Bank shareholders calling on them to vote against the election of these directors at Standard Bank’s AGM on 26 June.

2. After the resignation of Peter Sullivan at this year’s AGM, Standard Bank’s board will have 17 members.

3. See this letter to the African Development Bank, signed by over 100 NGOs, as well as this article by Yale Environment 360. Further information is available here.