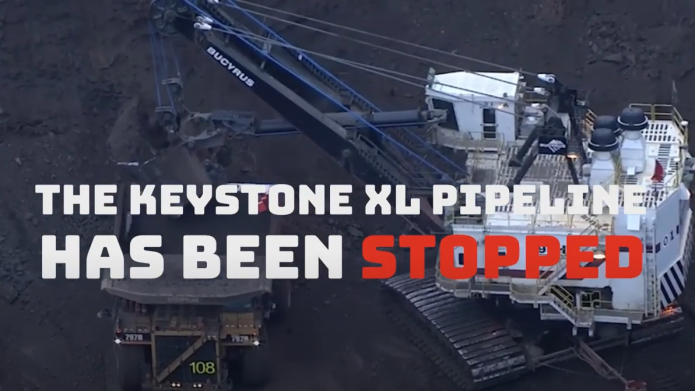 Today, President Biden officially revoked the presidential permit for the Keystone XL pipeline. This tar sands project, owned by TC Energy, has been challenged by the Indigenous Environmental Network since its first permit hearings back in 2010. While this is a substantial victory for the Indigenous peoples who have been in this fight for over a decade we must not forget about our relatives fighting Line 3, the Dakota Access Pipeline and other fossil fuel projects poisoning our communities and fueling the climate emergency.

“It is imperative that we keep the pressure on President-elect Biden to put an end to ALL fossil fuel infrastructure and projects, making the ones that are near or on indigenous territories of top priority. We love that KXL will be extinguished but what about Line 3, TransMountain, and numerous others? Every project brought back to the desk of elected officials needs to first be in the hands of the indigenous people with indigenous voices having the first and last say over what happens to the land and water,” said Tasina Sapa Win Smith, Co-founder of Cheyenne River Grassroots Collective.

The Keystone XL campaign started as a tar sands campaign led by Cree, Dene and Metis families living with the toxic results of tar sands mining in Northern Alberta. We cherish their leadership and direction through this decades-long fight to stop the expansion of the tar sands. It was because of their struggle and our efforts to uplift the Indigenous Rights violations associated with tar sands development, we were able to demonstrate the power of Indigenous resistance and organizing.

"The KXL pipeline would have only deepened our mutual addiction to dirty oil and enable the ongoing expansion of the tar sands at the expense of our communities; as well as at the expense of advancing clean energy,” said Melina Laboucan-Massimo, Indigenous Climate Action Director of Just Transition.

Within the context of the Environmental Justice movement, it has always been a challenge for folks to understand the strategic value of an Indigenous Rights framework when it comes to protecting land and water. As Keystone XL became a marque struggle in the United States, it was our belief that allies could not talk about this fight without addressing the impacts on Indigenous Rights.

“This is a victory and hopefully this is the end of it. We have been fighting KXL ever since we heard about it. It was not only about treaty rights violations, it was also about dirty oil. It was about being in solidarity with the Dene and Cree people in Canada. The State department did not consult with us, they never paid attention to us. Maybe, now they will. Indigenous Peoples have always stood up for Mother Earth and we will never give up that fight.” said Rodney Bordeaux, President for the Rosebud Sioux Tribe.

The Keystone XL campaign provided tangible examples of how Indigenous Peoples not only maintain the moral authority to protect their territories but the legal right to deny consent to toxic projects.

“For over a decade, Indigenous peoples and our allies have prayed, cried, and demonstrated to stop this evil zombie pipeline. We look forward to hearing President Biden take further action by stopping DAPL and line 3. Nothing less than stopping these attacks by guaranteeing free, prior and informed consent and establishing a climate test will we consider to call this a complete victory. However, today is a great day. And I thank all that helped us get here.” said Joye Braun, Cheyenne River Lakota, Community Organizer with Indigenious Environmental Network.

Extraction and pollution have poisoned Indigenous lands and bodies for long enough. Our votes were a mandate for Joe Biden to take bold action. Strengthening tribal sovereignty and our treaties must be built on a foundation of Free, Informed Prior Consent and stopping KXL, Line 3 and DAPL is a great start to that process.

“Once again our prayers were answered by our ancestors. It is a good victory, but we can’t forget how many times the government tried reviving the KXL pipeline. We are Oceti Sakowin and we have the power to make things better for the people,” said Angeline Cheek, Tate Ska Washte Win, Indigenous Justice Organizer, ACLU/Kokipasni Grassroots Group. “Through prayer there is unity and strength. Thank you to our spiritual leaders, elders, youth, communities, Grassroots organizers, supporters and allies. Mitakuye Oyasin.”

Established in 1990, The Indigenous Environmental Network is an international environmental justice nonprofit that works with tribal grassroots organizations to build the capacity of Indigenous communities. IEN’s activities include empowering Indigenous communities and tribal governments to develop mechanisms to protect our sacred sites, land, water, air, natural resources, the health of both our people and all living things, and to build economically sustainable communities.