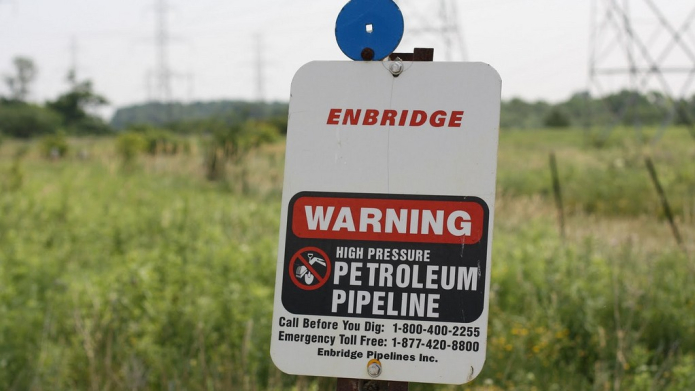 Today, on Indigenous People’s Day, Honor The Earth, Rainforest Action Network, Sierra Club, 350 Seattle, Friends of the Earth France and others launched a campaign calling on JPMorgan Chase, Wells Fargo and French bank Crédit Agricole to end their participation in credit lines of nearly $4 billion dollars associated with Indigenous rights violations with major tar sands pipeline companies Enbridge and TransCanada. The broad coalition of Indigenous and environmental groups kicked off the campaign by delivering an open letter to the banks. This presents an escalation in national efforts to hold banks accountable for environmental and human rights impacts stemming from the funding of major fossil fuel infrastructure projects.

The warning letter urges banks to avoid the reputational and financial risk of supporting Enbridge, the company behind the controversial Line 3 pipeline, which is incompatible with achieving the goals of the Paris Climate Agreement and respecting human rights, especially those detailed in the U.N. Declaration on the Rights of Indigenous Peoples.

As with the Dakota Access Pipeline (DAPL) — a highly controversial project constructed without the Free, Prior, and Informed Consent of the Standing Rock Sioux Tribe — both the Line 3 and Keystone XL pipelines pose a grave threat to Indigenous rights. Neither Enbridge nor TransCanada has secured the Free, Prior and Informed Consent of all the tribes on the route of their projects. The Mille Lacs, White Earth, and Red Lake tribes in Minnesota, whose lands would be crossed by Line 3, are fighting the project in the courts, while Indigenous-led grassroots opposition is fighting Line 3 on the ground.

With $1.48b of Enbridge’s credit facilities set to expire on the same day that the Equator banks are meeting to discuss environmental and social risk management and revision of the Equator Principles, the coalition is urging the banks to heed the lessons learned from Energy Transfer Partners’ DAPL and Kinder Morgan’s Trans Mountain Pipeline and decline any renewed involvement.

Tara Houska, National Campaigns Director at Honor The Earth said: “Enbridge has the only fully approved, fully funded major tar sands line in North America. It is a 1/3 owner in Dakota Access, and therefore a 1/3 owner in the UN-documented brutality on unarmed people that took place in Standing Rock. Enbridge now wants to slam almost one million barrels of tar sands per day through my people’s treaty territory and sacred wild rice, against the will of the tribes and people. No bank with even the most basic respect for human rights should be funding this company. Stop funding cultural genocide.”

Ruth Breech, Senior Climate and Energy Campaigner at Rainforest Action Network said: “Banks have a choice, and we’re telling JPMorgan Chase, Wells Fargo and Crédit Agricole loud and clear that they need to back off. Any bank that decides to renew credit with Enbridge and Transcanada will be implicated in Indigenous rights abuses and will knowingly add fuel to the fire of climate chaos. They won’t be able to claim that they didn’t have all the relevant information.”

Kelly Martin, Director of the Sierra Club’s Beyond Dirty Fuels Campaign said: “Dirty tar sands pipelines like Keystone XL and Line 3 would be disastrous for our communities and our climate, and any bank that’s helping fund the companies behind these projects are complicit in the damage they cause. Wells Fargo and other banks must stop supporting these dangerous projects and instead commit to investing in a future that benefits our communities, our economies, our health, and our planet.”

Alec Connon, 350 Seattle's Fossil Fuel Financing Campaign Director said: “It's morally unacceptable to profit from the destruction of our planet and the abuse of Indigenous Peoples' sovereign rights ― and that's what banks like JPMorgan Chase and Wells Fargo are doing when they fund the Line 3 and Keystone XL pipelines.”

Lorette Philippot, Private Finance Campaigner at Friends of the Earth France said: “As soon as next week, Crédit Agricole, JPMorgan Chase and Wells Fargo will have two options: refusing to renew their credit lines to Enbridge and make their actions consistent with their own policies and discourses; or renewing these supports and once again internationally appear as banks trampling on human rights. We call on them to get on the right side of history.”