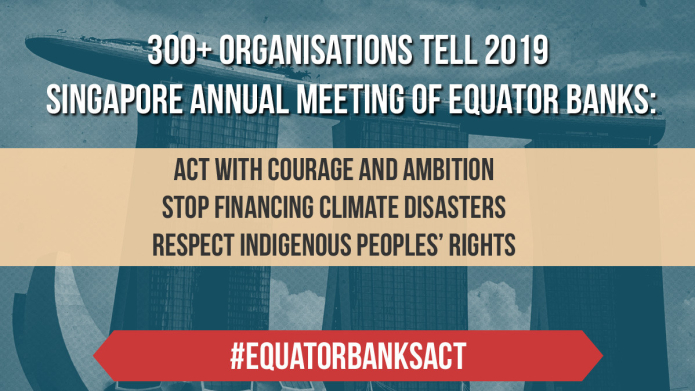 Equator banks finishing their annual meeting in Singapore yesterday agreed on a new set of Equator Principles that contain no meaningful improvements, and completely fail to meet the challenges of protecting Indigenous peoples’ rights and combating climate change.

Ignoring a passionate call last week from 312 civil society groups from 58 countries to ‘act with courage and ambition’ and take bold action on climate change and human rights, the Equator Principles Association (EPA) instead has opted for continuing with ‘business as usual’ with a text which only tweaks the current Principles and fixes none of the concerns that led to the demand for a revision two years ago.

“It is outright astonishing that a process that set out to make the outdated 2013 version of the Equator Principles future proof, taking into account the outcomes of the 2015 Paris climate agreement, which took two years to complete and involved nearly a hundred banks and hundreds of stakeholders, has in the end produced a document that is hardly distinguishable from the 2013 version,” said Johan Frijns, director of BankTrack. “With so little change, this has been a monumental waste of time and resources for everyone involved, and a truly missed opportunity for the Equator Principles Association to lead the banking sector forward in dealing with the many challenges of our time.”

The ‘targeted update process’ agreed upon by the EPA in 2017 aimed at improvements in four areas: 1) the distinction between ‘designated’ and ‘non-designated’ countries, which has allowed a lower level of scrutiny for projects mostly in developed countries, 2) the scope of application of the Principles in terms of financial instruments, 3) human rights, including the rights of Indigenous peoples in particular, and 4) climate change.

Regarding the ‘designated countries’ distinction, the revised EP4 maintains the unjustified distinction between those high-income countries with “robust environmental and social governance, legislation systems and institutional capacity designed to protect their people and the environment”, and ‘non-designated’ countries (typically poorer countries in the Global South) that lack such systems, where projects need to comply with IFC Performance Standards.

Osprey Orielle Lake, Executive Director, Women’s Earth and Climate Action Network (WECAN) said: “Equator banks’ finance for the tragic Dakota Access Pipeline (DAPL) in the United States, a ‘designated country’, helped trigger the EP4 update. Two years later, environmental protections have been further dismantled in the US as well as in other ‘designated countries’, like Australia. Meanwhile dozens of new fossil fuel projects are proceeding in these countries with disastrous consequences for the climate. Equator banks should have drawn a line in the sand globally, but failed to do so.”

Regarding the scope of the Principles, EP4 only lowers the threshold for corporate loans from 100 to 50 million USD and extends the Principles to include Project-Related Refinance and Project-Related Acquisition Finance, while excluding other financial instruments often used to fund projects.

Alison Kirsch, Climate and Energy Lead Researcher at Rainforest Action Network, said: “The EP4's narrow scope ignores many other ways that projects can be financed, such as through general corporate loans and project-related bonds. The Line 3 tar sands pipeline crossing from Alberta through Minnesota into Wisconsin is already fully constructed in some parts, without having received any financing covered under the EPs, though numerous Equator banks are involved. The project is proceeding without the consent of impacted Indigenous Peoples along the route, not to mention with grave climate implications. This example demonstrates how ineffective the EP4 remain even after this revision.”

Regarding Indigenous rights, EP4 falls short of a clear commitment to uphold Indigenous peoples’ rights including their right to grant or withhold consent for projects situated on Indigenous land and territories (known as Free, Prior and Informed Consent or FPIC), including in ‘designated countries’. Instead, in ‘designated countries’ like the US, the new Principles only require the consultation process with Indigenous Peoples to be ‘evaluated’ by an independent consultant. There is no explicit commitment to respect FPIC in all circumstances.

Carla Fredericks of First Peoples Worldwide, said: “The new Equator Principles’ failure to implement  FPIC as a right means they would be unlikely to prevent Equator banks from financing another situation just like DAPL, with all the associated risks to the feasibility of the projects,  the reputation of banks financing them, and the Indigenous peoples themselves. Yet this was the most basic expectation of this revision process, from civil society and concerned banks alike. The new version fails on that count.”

With regard to climate change, EP4 pays lip service to the Paris climate agreement, stating in the preamble that “we support the objectives of the 2015 Paris Agreement”. However it does not include even a single requirement that would exclude finance for projects that endanger the Paris goals, and fails to require consideration of Scope 3 indirect emissions resulting from the projects, which should be a critical factor for infrastructure projects such as pipelines. Even projects that are incompatible with the host country’s national climate commitments are still permitted for financing under the EPs. As a result, the Principles continue to allow for Equator finance for new coal-fired power plants and other new fossil fuel infrastructure, even though scientists have made clear that these are incompatible with limiting global temperature rises to 1.5 degrees.

Sierra Club campaign representative Ben Cushing said: “How clear do the world’s scientists need to make it before Equator banks recognize that every new fossil fuel project they finance takes us further away from averting climate disaster and therefore poses a huge risk to us all, banks included? These updated principles are a huge missed opportunity to ensure banks aren’t supporting dangerous projects that threaten our climate.”

Looking beyond these four improvement areas, the new Equator Principles again fail to deal with long standing shortcomings around transparency and accountability, with these topics deferred to a to be established new ‘operations working group’ and still to be developed ‘guidance notes’. The new Principles also continue to allow extensive discretion to adopting banks on how to implement the principles in specific finance situations.

Ryan Brightwell, human rights coordinator at BankTrack said: “The new Equator Principles reference banks’ responsibility to respect human rights under the UN Guiding Principles, but the UN Guiding Principles explicitly call for industry standards like this to operate accountability mechanisms so communities can raise complaints when the standards are not met. By once again failing to introduce such a grievance mechanism, the Equator Principles themselves are ignoring their UN-mandated responsibilities to respect human rights. It is not enough that this shortcoming has been deferred to a new Operations Working Group to consider, along with a host of other matters.”

Johan Frijns, BankTrack director concluded: “What we expected from banks were principles, clear rules that determine what sort of projects gets financed and what not. With the formulation  ’as appropriate’ remaining in the text no less than 14 times, leaving crucial matters to the discretion of adopting banks themselves, it may be better to from now on refer to EP4 as the Equator Flexibles.”

Faced with this extremely disappointing outcome of the revision process, the organisations that take part in the ‘Equator Banks, Act!’ campaign have vowed to actively resist the financing by Equator banks of all new fossil fuel projects and all projects that impact Indigenous peoples’ rights and territories that lack free, prior and informed consent.