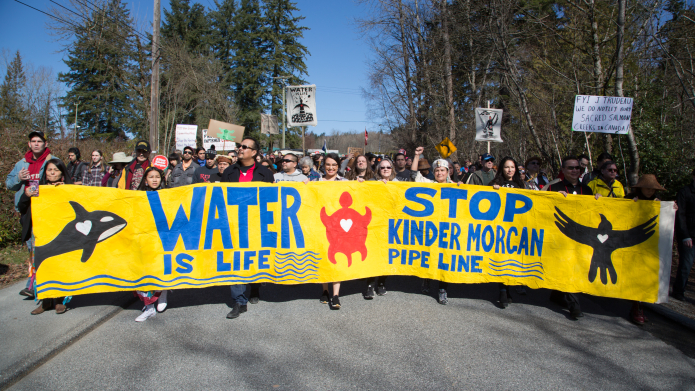 Kinder Morgan is the fourth largest energy company in North America. The company was founded in 1997 by Richard D. Kinder and William V. Morgan. It owns an interest in approximately 85,000 miles of pipelines of which 72,000 miles are used for the distribution of natural gas and the remainder for gasoline, crude oil and carbon dioxide. In addition, Kinder Morgan’s owns or controls 152 terminals where petroleum products, chemicals and other products are handled and stored. The company is known for the Trans Mountain Pipeline which it owned until it was bought by the Canadian government in May 2018.

Kinder Morgan has been cited for several workplace safety violations in the United States. Several explosions have occurred at Kinder Morgan’s pipelines and terminals which resulted in deaths and (severe) injuries of their employees. In 2004 a subsidiary of Kinder Morgan (KMGP Services Company Inc.) was fined $500,000 by the California Fire Marshal for a 'completely preventable' tragedy that killed five people and injured four.  In 2007 a Kinder Morgan subsidiary was found guilty for several felonies in connection to an explosion that killed five people. In 2012 a gas leak from a Kinder Morgan pipeline initiated an explosion at a plant owned by Pemex Exploración y producción, a subsidiary of Mexico’s state oil company Pemex. On July 13, 2016, a U.S. Federal Court ruled that Kinder Morgan should face the charges of gross negligence and negligence for the explosion.

The case of the Trans Mountain Expansion Project has shown that Kinder Morgan pushes through projects even when they violates Indigenous rights. When it owned and operated the project Kinder Morgan violated Indigenous rights including the right of Free, Prior and Informed Consent (FPIC), receiving opposition from many First Nations that would be directly impacted by the pipeline. The Indigenous Network on Economies and Trade has prepared a risk assessment on the expansion of the pipeline through the territory of the Secwepemc people, which have rejected the project.

Kinder Morgan's 85.000 mile of pipelines facilitate the extraction and production of natural gas (72,000 miles of its pipelines), gasoline and crude oil, which causes climate change. In particular, the construction of new fossil fuel pipelines allows the expansion of fossil fuel extraction, which is incompatible with the goals of the Paris Agreement.

Kinder Morgan has a long record of oil spills, fires and explosions in it's terminals and pipelines. In its two decades of existence Kinder Morgan is responsible for over 1800 oil and chemical spill violations of which nearly 500 from pipelines. In 2005 210,000 litres of crude oil leaked at the Sumas Tank Farm (part of the Trans Mountain Pipeline) of which a part leaked into the nearby Kilgard Creek. Due to Kinder Morgans failing to properly mark the Trans Mountain Pipeline a backhoe broke the line resulting in an oil leak of 250,000 litres in July2007. In May 2009 another 200,000 litres of oil leaked out of Kinder Morgan's tanks at Burnaby Mountain facility.

The U.S. Department of Transportation's Pipeline and Hazardous Materials Safety Administration (PHMSA) has cited Kinder Morgan several times for failing to execute required inspection, safety testing, monitoring and maintenance of its pipelines and failing to notify authorities about spills when they occur.

A Canadian court has overturned Ottawa’s approval of the Trans Mountain Pipeline – throwing plans to nearly triple the flow of Alberta’s landlocked bitumen to the west coast into limbo – in a ruling hailed by environmentalists and Indigenous groups. In a unanimous decision, the federal court of appeal said the government failed to consider the concerns of some First Nations.

Kinder Morgan's $5,5 billion credit facility has been cancelled after the Trans Mountain Pipeline was sold to the Canadian government.

Canada’s federal government has announced it will buy a controversial pipeline from the Alberta oil sands to the Pacific coast to ensure it gets built. The country’s finance minister, Bill Morneau, said on Tuesday that Justin Trudeau’s government will spend CAD 4.5bn (USD 3.45bn) to purchase Kinder Morgan’s Trans Mountain pipeline.

In September 2014 Kinder Morgan entered into a credit facility which allowed the company to borrow up to USD 5 billion, with Royal Bank of Canada being the administrative agent. The twenty-five banks involved are listed below. The credit facility was cancelled after Kinder Morgen sold the Trans Mountain Pipeline to the Canadian government.

Pipeline Transportation of Crude Oil
There are no projects active for Kinder Morgan now.

The Facts About Kinder Morgan

Standing Rock of the North