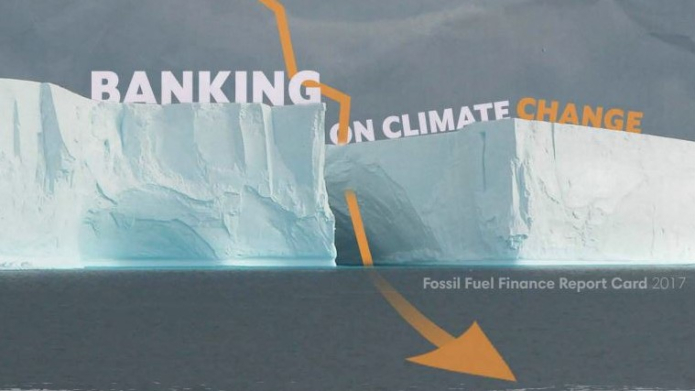 A report released today by Rainforest Action Network, BankTrack, Sierra Club and Oil Change International, in partnership with 28 organisations around the world, reveals that the world’s biggest banks are continuing to fuel climate change through the financing of extreme fossil fuels. The report finds that 2016 actually saw a steep fall in bank funding for extreme fossil fuels — however despite this overall reduction, banks are still funding extreme fossil fuel projects at a rate that will push us beyond the 1.5 degrees climate change limit determined by the Paris Climate Agreement.

See how the banks stack up and explore the data here.

In 2014, the banks analysed in the report funneled USD 92 billion to extreme fossil fuels. In 2015, that number rose to USD 111 billion. 2016 was the first full calendar year to be studied since the signing of the Paris Climate Agreement – and the USD 87 billion figure represents a 22 percent drop from the previous year. While the drop-off is a move in the right direction, it is vital that this become an accelerating trend and not a blip. The report's findings show that if we are to have any chance of halting catastrophic climate change and reaching the Paris goal of limiting climate change to 1.5 degrees, there must be a complete phaseout of these dangerous energy sources and banks must implement policies against extreme fossil fuel funding.

“Right now, the biggest Wall Street funder of extreme fossil fuels is JPMorgan Chase. In 2016 alone they poured USD 6.9 billion into the dirtiest fossil fuels on the planet,” said Lindsey Allen, executive director of Rainforest Action Network. “On Wall Street they are number one in tar sands oil, Arctic oil, ultra-deepwater oil, coal power and LNG export. Even in this bellwether year when overall funding has declined, Chase is funneling more and more cash into extreme fossil fuels. For a company that issues statements in favor of the Paris Climate Accord, they are failing to meet their publicly stated ambitions.”

The report, Banking on Climate Change, is the eighth edition of this fossil fuel finance report card that ranks bank policies and practices related to financing in the most carbon-intensive, financially risky, and environmentally destructive sectors of the fossil fuel industry. Those sectors are: extreme oil (tar sands, Arctic, and ultra-deepwater oil), coal mining, coal power, and liquefied natural gas (LNG) export.

Yann Louvel, BankTrack's climate and energy campaign coordinator said, “There is simply not enough time left for more excuse-making, more fiddling at the policy edges and more egregious bank investments in extreme infrastructure projects like pipelines that transport tar sands oil. When we sit in meetings with bank staff, we hear of their revulsion to Trump's stance on climate change and of their support for clean investments, yet their actions of continued investments in extreme fossil fuels demonstrate that they actually side with the Trump approach. The climate and profit imperatives for banks can coincide when it comes to clean energy investing, but as they continue to prove with their shortsighted fossil fuel investments, they're at complete odds with the world's long-term climate targets."

The report also explores bank failures when it comes to protecting human rights. The most glaring example of this in 2016 was the financing for the Dakota Access Pipeline (DAPL) and the rampant violations of Indigenous rights associated with that project – which triggered an Indigenous-led defund and divest movement that targets banks that finance dirty energy projects.

“The movement standing up to fossil fuel projects wherever they are proposed has gotten so large that these investments are now not only problematic from a climate and human rights perspective, but they’re also risky investments from an economic perspective too,” said David Turnbull, campaigns director at Oil Change International. “Our research has shown that any new fossil fuel development runs counter to our climate goals. If banks want to truly be leaders in their field, they need to stop ignoring climate risk and ensure their investments pass the climate test.”

In this past year alone, San Francisco, Seattle, WA, and Davis, CA, pulled their money out of Wells Fargo because of the bank’s various misdeeds including the funding of DAPL. Caving into public pressure, multiple major banks have announced that they are pulling out of DAPL, which emphasizes the need for proactive bank policies that restrict financing to fossil fuels and the human rights abuses associated with their extraction and transport.

"As the Trump administration continues to make reckless decisions that threaten our climate, it is more important than ever that the public is informed about whether the financial institutions we trust with our money are making investments that will worsen this crisis,” said Lena Moffitt, senior campaign director of the Sierra Club’s Our Wild America campaign. “The people are watching where and what banks sink their funds into, and they will not back down until every last one commits to investing in a future that benefits their communities, their economies, and their health."

Additional quotes from partner organisations in support of the report:

Shin Furuno, 350.org Japan Divestment campaign, commented: “The research shows that major Japanese banks are failing to integrate climate risk in their investment decisions. Starting with an immediate freeze on new fossil fuel financing, banks should divest from fossil fuels in line with keeping global warming well below 2 degrees. If Japanese banks continue to invest in coal and extreme fossil fuels, they risk becoming saddled with stranded assets and will face a backlash from investors and customers alike.”

Jenny Marienau, 350.org's US campaigns director, said: “There's no question that funding climate change is a deadly investment strategy. Yet banks around the world are funneling billions of dollars into the fossil fuel projects leading us closer to catastrophic warming every day. Movements like the Indigenous-led effort to Defund DAPL are rightfully pressuring banks to divest from infrastructure like the Dakota Access pipeline that puts profits before human rights and a livable future. It's up to us to resist these disastrous projects, push back on these fatal investments, and build the renewable energy solutions we need.”

Kuba Gogolewski, finance campaigner at Polish Foundation “Development YES - Open-Pit Mines NO”, said: “Funding companies that are developing new coal mines and power plants and planning more projects in the future is clearly at odds with climate science. It is just a question of time when communities impacted by climate change will start suing not only the companies developing coal projects but also the banks providing finance to build them.”

Vanessa Green, director of DivestInvest Individual, said: “This report is a well-timed reality check for the executive leadership at these banks, and for their investor and retail consumer audiences. While policies and promises can land in gray areas, these extreme fossil fuel financing numbers show that in practice banks are saying one thing about meeting Paris Agreement goals, and doing another. Fortunately, investors and consumers are paying close attention and moving their money to financial institutions with more integrity.”

Diana Best, senior climate and energy campaigner with Greenpeace US, added: “People across the planet are waking up to the role and responsibility of large banks in the proliferation of fossil fuel extraction, development, and transport. In many cases, these very same banks have policies acknowledging the urgency of climate change and their commitment to the rights of indigenous communities. It is time for these banks to put their money where their mouth is and stop financing projects and companies that contribute to climate change, undermine clean air and water, and violate the rights of Indigenous people and frontline communities. Their words are only as strong as their actions and their actions are simply not enough.”

Matt Remle (Lakota), editor of Last Real Indians and co-founder of Mazaska Talks, said: “It is our collective duty towards Ina Maka (Mother Earth) and the next generations that we hold financial institutions responsible in ensuring that they are not financing projects like DAPL, tar sands pipelines, fracked gas plants, coal and other institutions that adversely impact Indigenous, low-income and communities of color such as private prisons and immigration detention centers. It is important, and necessary, to illuminate just exactly where these institutions are investing our money."

Julien Vincent, Market Force’s executive director, said: “The banks featured in this report have it within their power to avoid runaway climate change if they decided to. They have power of life or death over polluting fossil fuel companies. Their decisions make or break coal, oil and gas projects that threaten our chances of a safe climate future. But the banks are still accountable to us, and citizens need to engage these institutions to demand that they keep our money away from destructive new fossil fuel projects, investing instead in the clean, renewable energy future we desperately need.”

Rachel Heaton, a member of the Muckleshoot Indian Tribe and co-founder and organizer for Mazaska Talks, said: “It is up to us to make sure we are securing a future for our generations to come. We are here to put pressure on these financial institutions and hold them responsible to act in morally and socially productive ways that support Mother Earth. At a minimum there should be standards in place to support the well-being and survival of Indigenous peoples of the world, communities of color, and those negatively impacted by the decisions of these institutions – standards that are not only limited to fossil fuel investments, but also shady banking practices, the financing of private prisons, and other harmful impacting situations.”

Sonia Hierzig, research officer at ShareAction, said: “ShareAction warmly welcomes the launch of this report. It will present a useful resource for investors engaging with their holdings in the banking sector on climate change, as it will allow them to scrutinise the banks’ exposures to extreme oil, coal mining and power, and LNG export.”

Christina Beberdick, coal campaigner at the German NGO Urgewald, adds: “In countries like the Philippines and Vietnam we see that banks are financing companies that build entirely new coal-fired power plants, making these countries dependent on coal for decades to come. Banks and investors must stop financing coal expansion companies immediately. The climate targets of Paris will otherwise not be met. Next week, Urgewald and partners will launch the first ever list of major companies planning new coal power plants worldwide. This new forward-looking divestment tool helps banks and investors to get rid of coal.”

Donny Williams, from We Are Cove Point, commented: “It's important to hold banks accountable for the roles they play in taking away people's health, safety and well-being through these energy projects. A loss or change in financing can be enough to cancel a project that would negatively impact broad swaths of people and ecosystems. Through creative direct actions, public protest and educational tools, We Are Cove Point has worked to make it harder for Dominion to find the funding it needs to build its export terminal in our community. We're happy to see this report come out, which will hopefully make it easier for banks to stop funding these harmful projects and easier for impacted people to more effectively attack the finances behind them."