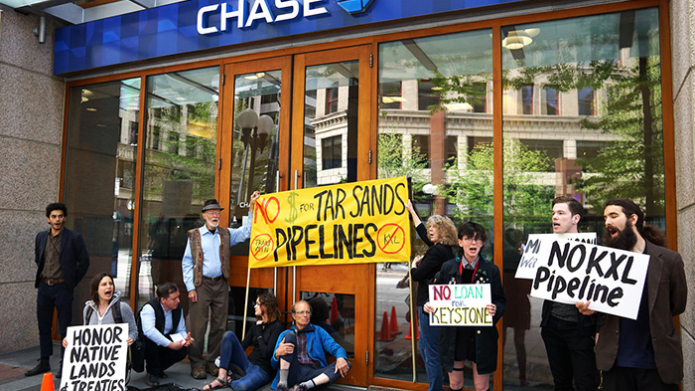 This week, over 20 Indigenous and environmental organizations, including BankTrack, delivered an open letter to 28 major banks, calling on them to back away from funding the Trans Mountain pipeline expansion project (TMEP).

The warning letter urges banks to avoid the reputational and financial risk of supporting this destructive project, which is incompatible with realizing the goals of the Paris Climate Agreement and respecting human rights, especially those detailed in the U.N. Declaration on the Rights of Indigenous Peoples.

“Mark my words, Kinder Morgan’s Trans Mountain pipeline expansion project will never see the light of day,” said Grand Chief Stewart Phillip, President of the Union of the BC Indian Chiefs. “We do not accept the unscrupulous liability of dirty oil coming through any pipeline system to benefit some Texans or multinational interests at the expense of our inherent responsibilities to our grandchildren’s grandchildren.”

The Trans Mountain Expansion Project would not only triple Trans Mountain’s capacity - transporting an additional 590,000 barrels of crude oil each day - it would lock in expanded production of one of the most carbon-intensive oils, Alberta tar sands oil.

“We’re making it loud and clear that banks need to back off from funding Trans Mountain,” says Lindsey Allen, Executive Director of Rainforest Action Network. “Any bank that decides to participate in this project will be implicated in Indigenous rights violations and will knowingly feed fuel to the fire of climate chaos. They won't be able to claim that they didn’t have all the relevant information.”

“As banks consider financing Kinder Morgan’s Trans Mountain Expansion tar sands pipeline, they should know that the over 120 First Nations and Tribes that have signed the Treaty Alliance Against Tar Sands Expansion will not let this project happen, says Grand Chief Serge Simon of the Mohawk Council of Kanesatake on behalf of the Treaty Alliance Against Tar Sands Expansion. “Indigenous and allied resistance to the pipeline will not be limited to BC either – it will be all over Turtle Island and will also target the banks that chose to ignore our opposition.”

As with the Dakota Access Pipeline (DAPL), a highly controversial project constructed without the free, prior, and informed consent of the Standing Rock Sioux Tribe, the Trans Mountain pipeline expansion poses a grave threat to Indigenous rights. First Nations that would be directly impacted by the route and port terminal are fighting the project in the courts and leading robust protests on the ground.

“​Until banks honor the right to Free Prior and Informed Consent of indigenous ​people - including the Dené, Cree,​ Metis, and​ Athabasca Chipewyan First Nation - we will continue to call on municipal and foreign governments to divest from these banks,” says Jacqueline Fielder of Mazaska Talks.

With financing for Kinder Morgan’s TMEP being finalized in the coming weeks, the groups are urging the banks to heed the lessons learned from DAPL and decline any additional involvement with Kinder Morgan that would facilitate financing of the TMEP, particularly Kinder Morgan’s planned C$5.5 billion credit facility.

“Tar sands oil is deadly, destructive, and economically infeasible,” said Tara Houska, National Campaigns Director of Honor the Earth. “Banks run on our money — we have a say in how it is invested. Without consent of indigenous nations impacted by these projects, banks are supporting sacrifice zones, while also actively contributing to climate change. Invest in renewables and our future.”

Additional statements:
Eugene Kung, Barrister & Solicitor at West Coast Environmental Law:
“The material legal, political and reputational risk facing Kinder Morgan’s pipeline and tanker project means that this is not your average pipeline investment. Investors should be aware of the significant uncertainty surrounding the project the associated risks for anyone invested in it. Kinder Morgan’s pipeline and tanker project does not have the consent of affected First Nations, who have banned it in their unextinguished Indigenous laws. This represents significant legal, political and reputational risk that investors need to understand.”

Clayton Thomas-Müller of the Mathias Colomb First Nation, and Campaigner at 350.org:
“The extraction and production of tar sands oil not only spreads climate chaos across the planet, it has been killing Dené, Cree and Métis people in Northern Alberta through cancer and the poisoning of their water and food systems. Banks that fund tar sands infrastructure like Trans Mountain are writing death warrants for our people and the world at large.”

Ben Smith, Field Organizing Manager with Greenpeace:
“The banks on this list have a choice. They can acknowledge the material and reputational risk of investing in highly controversial projects like the Trans Mountain Expansion Project (TMEP), or they can continue their wishful thinking that the world won’t notice they are contributing to the destruction of the environment, worsening climate change, and violating Indigenous rights. The moral and economic sense to move away from yesterday’s energy source has been acknowledged the world over, and the emboldened movement to stand up to big oil is building unprecedented strength. The time has come for financial companies to end their relationship with destructive companies like Kinder Morgan and stand with the people and the planet.

Tom BK Goldtooth, Executive Director, Indigenous Environmental Network:
“Our prophecies tell us that life on Mother Earth, as we know it, is in danger and coming to a great transformation. The time is now for banks to divest from an economy based on industrial extraction, production and combustion of fossil fuels and its environmentally risky transportation infrastructures. Investment policy changes are urgently needed that recognize the health and vitality of Earth’s living systems, ecological and social well-being and the rights of Indigenous Peoples.”

Lucie Pinson, private finance campaigner at Friends of the Earth France:
“European banks are not going to be spared from the mobilization in support of indigenous people against tar sands and other fossil fuels projects in North America. Banks which fail to stay clear from financing, directly or indirectly these projects will be targeted. In France, we expect Crédit Agricole, who stated during its general assembly to have rejected providing project finance to the Keystone XL, to also reject directly financing Trans Mountain and other tar sands pipelines. But only blacklisting the companies behind these pipelines will guarantee no support is given to these fatal projects.”

Sven Biggs, Climate and Energy Campaigner with Stand.earth:
“Bankers that are considering investing this project should know that the people of British Columbia do not want this pipeline. Already tens of thousands people have pledged to stand with First Nations and do whatever it takes to stop Kinder Morgan.”

Hannah McKinnon of Oil Change International:
"New tar sands infrastructure is incompatible with a safe climate, the world is in a deep hole and the first thing we need to do is stop digging. This pipeline is the epitome of risky: First Nations don't want it, the Province of British Columbia doesn't want it, the climate can't afford it, and the sector that it is being built for doesn't need it."

Vanessa Green, Director of DivestInvest Individual:
"At this stage, the financing relationships are exposed and the financial and other risks of putting money into fossil fuel infrastructure are clear. To not recognize them, as an executive or an investor amounts to some combination of negligence, laziness, bad business and moral bankruptcy. What is less clear is which of these banks will gain the most by tapping into the massive global consumer interest in investing where our energy opportunities align with a social conscience."

Regine Richter of Urgewald:
“Some banks participating in DAPL may have wished they hadn’t. They now have a chance to show they learned their lesson and refrain from getting involved in Trans Mountain. If they don’t and help financing it, they manifest their total ignorance towards climate, environment and human rights.”

Lena Moffitt, Senior Campaign Director, Our Wild America Campaign - Sierra Club:
"Tar sands expansion is disastrous for land, water, climate, and communities. If big banks support this toxic and destructive industry, they are betraying the people who entrust them with their money. We stand with Indigenous communities in urging financial institutions not to finance the Trans Mountain pipeline expansion or any other dangerous tar sands project."