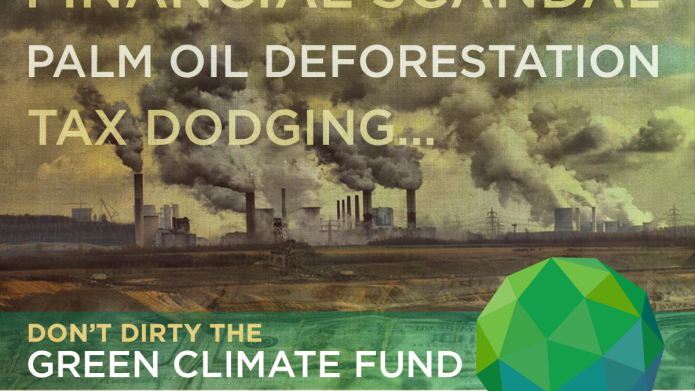 The Green Climate Fund (GCF) must not channel its money through two scandal-ridden international commercial banks that are leading funders of the coal industry, say civil society groups at a meeting of the GCF's Board in Songdo, South Korea.

The groups say that the GCF must reject applications for accreditation by big banks HSBC and Crédit Agricole. Accredited entities are institutions approved to receive and manage GCF funds.

"The Green Climate Fund Board must reject HSBC and Crédit Agricole. Creating new business for big banks with large fossil fuel portfolios and poor records on human rights and financial scandal would undermine the very purpose of the Fund," said Karen Orenstein of Friends of the Earth U.S.

"To accredit HSBC and Crédit Agricole is to short-change the vulnerable communities and the countries that the Fund is meant to directly benefit. There is no profit to be made in building the resilience of those adversely impacted by climate change. Public funds must be used to support local communities in developing countries, not to subsidize big banks," said Sam Ogallah of the Pan African Climate Justice Alliance.

"Accrediting HSBC and Crédit Agricole would be inconsistent with both the Paris Agreement, and with upholding high human rights standards. Any private sector partner of the GCF must have a credible strategy in place to make its entire portfolio and operations consistent with keeping global temperature rise to no more than 2 °C, let alone well below 1.5 °C," said Annaka Peterson of Oxfam.

"The accreditation of these banking giants would jeopardize the reputation of the Green Climate Fund and expose it to unnecessarily high fiduciary risk. HSBC and Crédit Agricole provided US$7 billion and US$9.5 billion, respectively, to the coal industry between 2009 and 2014, and their coal financing does not show a clear downward trend. Moreover, HSBC is deeply embroiled in massive financial scandal," said Yann Louvel of BankTrack.

A U.S. judge recently ordered the release of a report by an independent monitor overseeing the cleanup of HSBC's massive money laundering -- the report is said to be so damning that it would provide a "road map" for criminals seeking to launder money and finance terrorism.