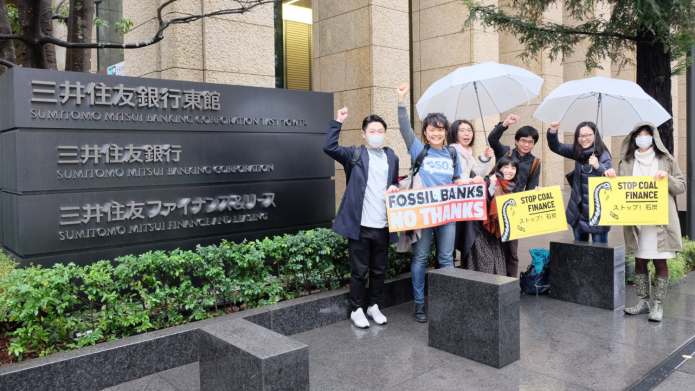 Today, Sumitomo Mitsui Financial Group (hereinafter SMBC Group) published a statement entitled “Reinforcing Efforts against Climate Change,” (1) announcing revisions to its coal-fired power sector policy as well as updated targets for green and sustainability finance. Environmental NGOs welcomed the strengthening of policies toward decarbonization, but issued the following statement, recognizing that there are still many challenges to be addressed for the SMBC Group to set a business strategy consistent with the Paris Agreement.

In the new policy, the Group stated that “Support for newly planned coal-fired power plants and the expansion of existing plants are not provided” and removed exceptions such as ultra-supercritical pressure (USC) technology from the previous policy. However, in an exchange with NGOs, the Group clarified that under the new policy, “support can be considered when (projects) will contribute to transition to decarbonization, such as CCUS and ammonia / biomass mixed combustion.” These technologies have not yet been put to practical use and will not contribute to the achievement of the medium-term goal required for the 1.5 degrees Celsius goal of the Paris Agreement, which is to halve greenhouse gases in 2030. Regarding the mixed combustion of ammonia and hydrogen, about 10-20% of the mixed combustion is aimed at, and it is not a solution at all. Coal-fired power plants need to be shut down by 2030 in OECD countries and by 2040 globally to reach the 1.5 degrees target. Instead of treating CCUS and mixed combustion technology as exceptions, the Group needs to set rigorous criteria to determine whether their clients’ businesses are consistent with the 1.5 degrees goal.

The SMBC Group announced that it will “establish a long-term action plan to contribute to a carbon neutral society by 2050 and detailed initiatives” and that it will “obtain a clear understanding of the GHG emissions generated by its loan/investment portfolio (Scope3) and set medium- to long-term targets regarding those emissions.” We welcome this as an initiative that is more progressive than other Japanese banks. The Group explains it will start with Scope 3 of power, oil and gas sectors. We urge the Group to expand the scope to the entire value chain of the fossil fuel sector including coal mining, and the forest sector including palm oil. In addition, it is important to include asset management companies such as Sumitomo Mitsui DS Asset Management and work on it as an entire group.

On the other hand, compared to the recent international trend that European and US banks are committing to net zero emissions in their investment and loan portfolios (2), it is a concern that the Group's has only committed to “future target setting” of such emissions. The goal set by the Group last year to reduce its credit balance of project finance related to coal-fired power generation to zero by 2040 needs to be realized earlier and be expanded to corporate finance in the coal-fired sector in order to be consistent with the Paris Agreement. There is also great concern that no revisions have been made to the oil and gas and forest sectors. Including these sectors, it is necessary to promptly set specific indicators and medium- to long-term goals that are consistent with the Paris Agreement.

Eri Watanabe, Japan Finance Campaigner for 350.org said “Concerning the urgency of the climate crisis, the revision of the SMBC Group's policy is much slower. In order to meet the 1.5 degrees target, it is necessary to realize the urgent phase-out of coal and fossil fuel sectors as climate science demands. Strong leadership is required to achieve the target by backcasting, rather than by building up on the current situation.”

Kimiko Hirata, International Director at Kiko Network stated “Understanding that the SMBC Group’s recent revision is due to the recognition of the need to strengthen actions under the Paris Agreement, we cannot evaluate that the Group's finance is consistent with the Paris Agreement. Especially in the coal-fired power sector, although not explicitly stated, there is great concern that allowing CCUS and ammonia/hydrogen mixed combustion technologies will help extend the life of coal-fired power.”

Yuki Tanabe, Program Director of JACSES said “Regarding the suspension of support for coal-fired power generation projects, the SMBC Group has made it clear that CCUS and ammonia/biomass mixed combustion are exceptions in the conversation with NGOs. It is impossible to assume that there are such exceptions from the announced policy text. If there is such an exception, it should be clearly stated in the policy to avoid misleading understanding by stakeholders.”

Hana Heineken, Senior Responsible Finance Campaigner at RAN said, “SMBC Group has stepped ahead of the other Japanese banks by committing to measure its financed emissions. But given its significant climate footprint, there is no way we can take them seriously without a clear commitment to zero out emissions based on a 1.5 degree timeline, including by stopping the financing of fossil fuels, deforestation, and peat destruction.”