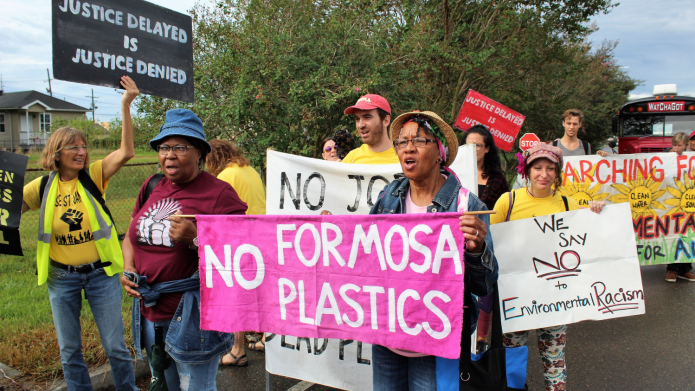 The Sunshine Project is a proposed petrochemicals complex on a 2,400-acre site in St. James Parish, Louisiana. It will use ethane, a byproduct of fracking, as the feedstock for the production of various plastics (polyethylene, polypropylene, polymer and ethylene glycol). The project is operated by Formosa Group LA LLC (FG LA LLC), a US subsidiary of Formosa Plastics Group, a Taiwanese conglomerate.

The Sunshine Project will be located within an 85-mile stretch of the Mississippi River between New Orleans and Baton Rouge that is widely known as Cancer Alley due to the number of petrochemical facilities that populate the area. The region is predominantly inhabited by historic Black neighbourhoods, including St. James Parish. In the 10-mile radius around St. James alone, there are twelve toxic petrochemical facilities.

UN human rights experts specifically cited concerns over the Sunshine Project when they stated that the further industrialization of Cancer Alley amounts to a form of “environmental racism". There is significant local community and civil society resistance to the project.

The Sunshine Project, located in Louisiana’s “Cancer Alley”, is a textbook case of environmental racism, releasing many more carcinogens into a predominantly African-American community already inundated with health problems caused by industrial pollution. It would also be a major greenhouse gas emitter, as well as exacerbating the global plastic pollution crisis.

Banks and asset managers should publicly commit to no direct or indirect financing of the Sunshine Project.

Formosa Plastics’ Sunshine Project is a textbook case of environmental racism. The petrochemicals complex poses a grave threat to the health and safety of residents in St James Parish and other local communities. There are already twelve toxic petrochemical facilities within a 10-mile radius of the planned Formosa project, which forms part of an 85-mile stretch of the Mississippi River, predominantly inhabited by historic Black neighbourhoods, that is widely known as “Cancer Alley.” The complex will be built directly adjacent to a residential area of the 5th District and one mile from an elementary school that serves an almost entirely Black student population.

According to data from the U.S. EPA’s Risk-Screening Environmental Indicators (RSEI) database, the Cancer Hazard of facilities in St. James Parish has increased by nearly 800% over the last decade (2007 – 2018). In March 2021 United Nations human rights experts raised serious concerns over further industrialization of Cancer Alley and called for an end to environmental racism in the 85 mile area, specifically citing concern over Formosa Plastics’ proposed petrochemical complex. The experts found that the industrialization of the lower Missippippi has polluted the land and water and subjected primarily African American residents to adverse health effects: "This form of environmental racism poses serious and disproportionate threats to the enjoyment of several human rights of its largely African American residents, including the right to equality and non-discrimination, the right to life, the right to health, right to an adequate standard of living and cultural rights”.

Building on top of gravesites of formerly enslaved ancestors

In 2019, an independent cartographic analysis showed that on the site where Formosa Plastics plans to build its facility, multiple cemetaries of former plantations were located. This means the plant would be built on top of the burial sites of enslaved ancestors of the local community. What’s worse, Formosa Plastics knew about the grave sites while seeking land use approval from the St. James Parish Council, but chose to withhold this crucial information from state and municipal decision makers and the local community. Formosa Plastics’ proposed chemical complex not only poses further severe health problems for the community, but threatens to destroy newly discovered spiritual links to its ancestral history.

The March 2021 letter from UN Human Rights experts also made this important connection of a long history of anti-Black racism in the United States: “The African American descendants of the enslaved people who once worked the land are today the primary victims of deadly environmental pollution that these petrochemical plants in their neighbourhoods have caused," they said. "We call on the United States and St. James Parish to recognise and pay reparations for the centuries of harm to Afro-descendants rooted in slavery and colonialism.”

Each year, the Sunshine Project would be permitted to emit 86,000 kilograms of benzene, 1,3-butadiene, acetaldehyde, formaldehyde, and ethylene oxide – all known carcinogens – into a community already inundated with health problems caused by industrial pollution.

The complex would emit 13.6 million tons of CO2e (greenhouse gases) per year, equivalent to the annual emissions of three coal-fired power plants. In combination with existing facilities, UN experts found that this would mean the annual greenhouse gas emissions of St. James Parish could exceed those of 113 countries.

Among other things, the complex would produce plastic resins and petrochemicals for single use plastics like shopping bags and plastic cups, contributing to the global plastics waste problem. Formosa Plastics Corporation already is among the 20 leading companies that together generate more than half the world’s polymer production destined for single-use plastic waste, together with among others Dow, ExxonMobil and Sinopec.

Built in a vulnerable floodplain

Hurricane Katrina was a monumental environmental disaster that is quickly becoming a marker of what is understood to be the new normal for the local Gulf Coast’s notoriously destructive hurricane season. The rising intensity of seasonal storms poses elevated risks to Formosa Plastics’ proposed project site, which is located in a natural floodplain. Forty percent of St. James Parish is classified as ‘wetlands’, made up of marshes and swamps. Major flooding in St. James in 2016 caused significant damage; throughout Louisiana, 40,000 homes were destroyed and 13 people died. Siting massive toxic petrochemical facilities in the area poses enormous public health and environmental risk. Recent storm-induced industrial disasters affirm the gravity of these risks, such as the 2017 Arkema explosions near Houston during Hurricane Harvey.

This super-polluting project does not belong in a climate-safe world and certainly not in Louisiana where accelerating coastal erosion (Louisiana has lost approximately 25% of its land mass from 1932-2016), sea level rise, and strengthening hurricanes are already creating some of the United States’ first climate refugees.

The Sunshine Project is not an isolated case. Formosa is a “serial offender” in violating environmental regulations, as well as putting workers and communities in danger. In the company’s 65 year history, Formosa Plastics has totalled over US$ 650 million in fines and penalties across nearly a dozen sites worldwide. In 2016, a Formosa subsidiary was responsible for the worst environmental disaster in the history of Vietnam.

Formosa Plastics’ track record in Texas, where it operates a similar facility to the Sunshine Project, is also a cause for alarm. In June 2019, a federal judge found that Formosa had committed “enormous” violations of the Clean Water Act, having dumped plastics pellets and powder into Lavaca Bay every day for years, for which it had to pay a record US$ 50 million settlement.

Formosa’s record of environmental and rights violations means it can’t be trusted, as some financiers have begun to recognize. In August 2020, Norway’s Sovereign Wealth Fund announced exclusions for two Formosa Plastics subsidiaries, citing an “unacceptable risk for violation of human rights". Also in August 2020, Storebrand Asset Management added two Formosa Plastic subsidiaries to its exclusion list as part of its broader effort to divest from companies contributing to the climate crisis.

Although originally projected at US$ 9.4 billion, coronavirus pandemic-related delays and rising prices for construction materials are leading to significantly higher costs. A December 2020 estimate by Taiwan Ratings put costs at US$ 12 billion.

In March 9, 2020 filings with the Taiwan Stock Exchange, FG LA LLC majority shareholder Formosa Petrochemical Corporation reported that total equity investment in FG LA LLC (with FPC owning 100% of shares) amounted to US$ 413 million. Considering the lengthy timeline of the company's estimated US$ 9.4 billion Sunshine Project, this equity may be enough project financing for the time being, precluding the need for any direct loans to FG LA LLC.

'One Oppressive Economy Begets Another'

The further industrialization of so-called “Cancer Alley” in the southern United States, known for its pollution-emitting chemical plants, should be halted according to a large group of independent UN human rights experts, who on Tuesday branded it a form of “environmental racism”.
2021-03-02 | UN News
blog
external news
our news

Huge toxic site to be built on grounds where slaves are likely buried, files reveal

What Could Happen if a $9.4 Billion Chemical Plant Comes to “Cancer Alley”

In St. James Parish, Louisiana, a Taiwanese industrial giant seems likely to be granted a permit to build a billion-dollar plastics plant. Its proposed emissions could triple levels of cancer-causing chemicals in one of the most toxic areas of the U.S.
2019-11-18 | ProPublica
blog
external news
our news

One of the most polluted regions of the country is being overrun by a new glut of oil and gas facilities, including one that will emit as much carbon as three coal-fired power plants
2019-10-30 | RollingStone

Capacity and production in the U.S. Plastics Production Corridor, an area which runs along the U.S. Gulf Coast in Texas and Louisiana, are forecast to grow to 2035, despite increasing climate risks from storms, sea-level rise and storm surges, causing the growing possibility of stranded assets of USD 16 billion in the short-term (by 2021) and USD 45 billion over the mid-term (by 2025).
2020-11-20 00:00:00 | Planet Tracker
company documents

Information about quarterly results and consolidated financial statements for Formosa Petrochemical Corporation and its subsidiaries.

On 23 April 2018, Louisiana Governor John Bel Edwards and the Formosa Group announced that the company planned to build a US$ 9.4 billion petrochemical manufacturing complex in St. James Parish.

In January 2020, conservation and community organizations filed a lawsuit challenging the U.S. Army Corps of Engineers’ permits for the Sunshine Project, on the grounds that they had failed to disclose the environmental damage and public health risks, as well as failing to adequately consider the harm to cultural resources such as slave burial grounds on the site.

On 10 November 2020, the U.S. Army Corps of Engineers announced that it had suspended its permit for the proposed plant in response to the lawsuit. On 18 November, a District Judge remanded the case back to the state environmental agency, noting that the “environmental justice analysis was inadequate". This judgement was overturned in March 2021, with the matter currently referred to an appeals court.

On 19 November 2020, Formosa stated that in response to the Covid-19 pandemic it had “deferred major construction until the pandemic has subsided and/or an effective vaccine is widely available". The Final Investment Decision has also been indefinitely delayed.