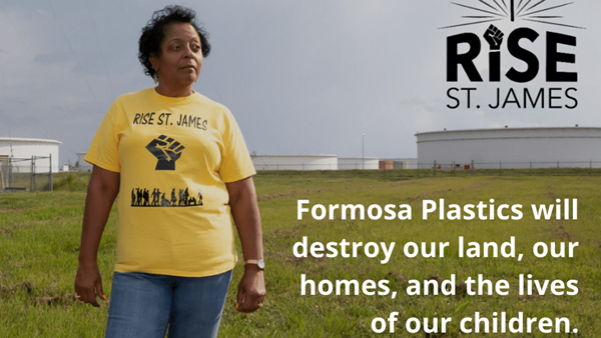 175 organizations today called on 30 leading banks and financiers not to fund the construction of Formosa Plastics’  US$ 12 billion “Sunshine Project” petrochemical plant in St. James, Louisiana.

Signatories to the letter from RISE St. James include residents and community groups, major U.S. civil society organizations, and international groups concerned about toxic air pollution caused by the proposed plastics plant. They criticized the environmental racism of siting the plan in Cancer Alley, a predominantly Black community already suffering from exposure to industrial air pollution.

“Formosa Plastics will destroy our land, our homes, and the lives of our community. We’re saying enough is enough, and we’re standing up for a better, cleaner future for ourselves and our children. Banks shouldn’t finance this level of pollution, and if they want to show that they can be responsible then they need to say no to Formosa,” said Sharon Lavigne, founder and president of RISE St. James.

The plant would also exacerbate climate change with annual proposed greenhouse gas emissions of over 13.5 million tons. The Formosa Plastics plant would be the largest new source of greenhouse gases of any oil, gas or chemical infrastructure project in the United States. According to the company’s own literature, the facility would double the toxic air pollution in St. James Parish. Formosa Plastics’ proposed project “pollutes too much for Taiwan,” according to a Bloomberg report about how it wouldn’t be allowed in Formosa’s home country.

Instead it will be located within an 85-mile stretch of the Mississippi River between New Orleans and Baton Rouge that is widely known as Cancer Alley or Death Alley due to the number of petrochemical facilities that populate the area. The region is also predominantly inhabited by historic Black neighborhoods, including St. James Parish. In the 10-mile radius around St. James alone, there are twelve toxic petrochemical facilities.

A recent investment report on the plant’s financial viability concluded that it is offering “the wrong products, at the wrong time, at the wrong price, in the wrong place, and with the wrong financial calculus.” Formosa also faces ongoing legal challenges and unanimous opposition from the New Orleans City council as well as residents and social justice advocates.

Click here to read the full letter and list of signatories calling on the leading financiers of the plant to pull their agreement to fund.

Organizations who signed the letter provided the following statements:

“Formosa Plastics will destroy our land, our homes, and the lives of our community. We’re saying enough is enough, and we’re standing up for a better, cleaner future for ourselves and our children. Banks shouldn’t finance this level of pollution, and if they want to show that they can be responsible then they need to say no to Formosa,” said Sharon Lavigne, founder and president of RISE St. James, a faith-based grassroots organization formed in opposition to the Formosa plant.

“Banks and asset managers investing in Formosa’s ‘Sunshine Project’ are not only taking a huge financial risk, but they would also do untold harm to their reputation if they back a project that is becoming a bellwether for how seriously investors take environmental racism,” said Maaike Beenes, climate campaigner at BankTrack, an international organization monitoring fossil fuel finance, environmental and human rights concerns raised by the activities of private sector commercial banks.

“Banks and financiers should not fund Formosa, and should cut their support for all entities and initiatives that undermine human rights. Our experience shows that Formosa is a bad neighbor, decimating the local environment, provoking recurrent explosions, polluting our air and water, and damaging our health. We want to help the people of St. James to avoid the same problems,” said Yuanher Robin Hwang, head of the Self-help Association to Seek Full Compensation from the Sixth Naphtha Cracker, an organization seeking damages for premature deaths, cancer and air pollution caused by Taiwan's largest petrochemicals complex, which is owned by Formosa Plastics group.