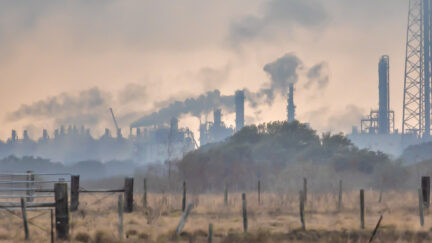 Formosa Plastics Group’s six-decade track record is riddled with environmental, health, safety, and labor violations, including devastating accidents and persistent pollution in multiple countries, according to a comprehensive new report released today. In profiling the past and present impacts of one of the world’s largest petrochemical and plastics producers, the report illustrates the profound risks that the industry poses to human rights and the global climate.

Formosa Plastics Group: A Serial Offender of Environmental and Human Rights (A Case Study) reflects two years of investigation and analysis of the conglomerate’s history by the Center for International Environmental Law (CIEL), the Center for Biological Diversity, and Earthworks.

Among the findings documented in the report are:

The report’s in-depth look at the inherent dangers posed by plastics and petrochemical production comes at a time when oil and gas companies are increasingly tying their future growth to the demand for plastics and the oil- and gas-based petrochemicals used to make them. Chemical producers aim to increase plastic output nearly 40% by 2025. Formosa Plastics Group is among the producers with major expansion plans, including proposals to extend its existing operations in several locations.

“The human rights and environmental harms associated with Formosa Plastics’ operations are egregious, but unfortunately not exceptional for the industry. Plastics and petrochemical production, like the fossil fuel industry that feeds it, is a dirty business, with dire consequences for communities and the climate. Expanding petrochemical production in the midst of multiple planetary emergencies is irresponsible; allowing a company with a track record like Formosa Plastics’ to do so is downright reckless,” said Nikki Reisch, director of the Climate & Energy Program at CIEL. “Few plastics and petrochemical producers are household names, but they are all too familiar to the fenceline communities that bear the brunt of the pollution and the threat of accidents from their facilities.”

Formosa Plastics proposes to construct one of the world’s largest new production facilities for plastics and plastic feedstocks in St. James Parish, Louisiana, in the heart of Cancer Alley. If constructed, the facility would exponentially increase already dangerous levels of air and water pollution in the surrounding predominantly Black community and would be one of the largest single sources of greenhouse gas emissions in the United States. In response to community-led protests, in August the Biden Administration announced it would require a full Environmental Impact Statement (review) of the Formosa Plastics “Sunshine Project” proposal.

“The people of Louisiana deserve a good, safe economy that is supportive of local communities and provides reliable, well-paying jobs,” said Jane Patton, co-author and CIEL’s Plastics & Petrochemicals Campaign Manager, based in southern Louisiana. “Our state’s elected leaders should be prioritizing safe and renewable energy technologies that provide long-term support and stability. Formosa Plastics will not provide any of those things, and this company and its project are wrong for Louisiana on all fronts.”

The authors/groups call on policymakers and decision makers to take immediate action to: hold Formosa Plastics Group accountable for existing harms from its operations; take the company’s history of environmental, health, and safety impacts into account when reviewing applications for new permits; ending public subsidies for the plastics and petrochemical industries; and adopting a ban on new plastics and petrochemical facilities to protect communities and the planet from the rising impacts of petrochemical production.

“Community members forced to continue living in close proximity to plastic production facilities play a critical role in overseeing some aspects of compliance associated with the plastic facility operations. Community members observing and documenting spills, leaks, toxic chemical releases, and the discharge of residual plastic components into the environment and reporting the events to the environmental regulatory agencies and parish/county officials, frequently serve as the basis for documenting violations and the issuance of compliance orders by state and federal regulatory agencies.” — Wilma Subra, Technical Advisor to Louisiana Environmental Action Network.

“Inclusive Louisiana knows that the Formosa Resolution triples our pollution ( air,water,soil) which adds to the climate crisis. Our local, state, congressional leaders and laymen is denying the climate crisis and doing everything to support the disrespect and disregard of Mother Earth and her people. They must stop Going along to GET alone. Inclusive Louisiana knows also that the state of Louisiana and Saint James Parish should be looking to start the needed infrastructure for renewable energy, a solar panel, a car or part factory for renewable energy and this could have happened yesterday. Indeed, the Mississippi River is the gateway to the world and it’s past time to use it for all our future.” — Gail LeBoeuf and Barbara Washington, Inclusive Louisiana.

“The scale of Formosa Plastics’ abuse is staggering. Here in Louisiana, they are prepared to wipe a historic Black community off the face of the earth in pursuit of more profit and more plastic. This community that survived enslavement, lynching, the Jim Crow era and the theft of Black land has managed to survive and even thrive. After 150 years, it’s Formosa that is the threat, now poised to push them off of their ancestral land and build its facility on the likely burial grounds of enslaved people. I can think of no company whose actions are more heinous. Formosa leads the human rights hall of shame and should be driven out of Louisiana and every other place it seeks to operate.” — Anne Rolfes, Director, Louisiana Bucket Brigade.

“Communities in the United States and around the world have been contending with the toxic and abusive practices of various Formosa Plastics companies for many years. This report makes a powerful case that these are not isolated incidents, but a disturbing pattern by a highly integrated, centrally-controlled global enterprise that systematically ignores environmental protection and the rights of communities.” — Marco Simons, General Counsel, EarthRights International.

“We may never be able to fully measure the magnitude and scale of the harm done by Formosa around the world – both in terms of the damage it has wrought to the environment as well as basic human rights,” said Pam Spees, an international human rights attorney with the Center for Constitutional Rights. “This report is an important contribution to that accounting and is another wake-up call to officials in Louisiana, reeling from double disasters of historic storms that have wreaked havoc on the petrochemical infrastructure in the state, to walk away from a company one U.S. court has already found to be ‘serial offender’ before it’s too late.”

For more on the banks linked to Formosa Plastics, see the Dodgy Deal profile on Formosa's Sunshine Project.