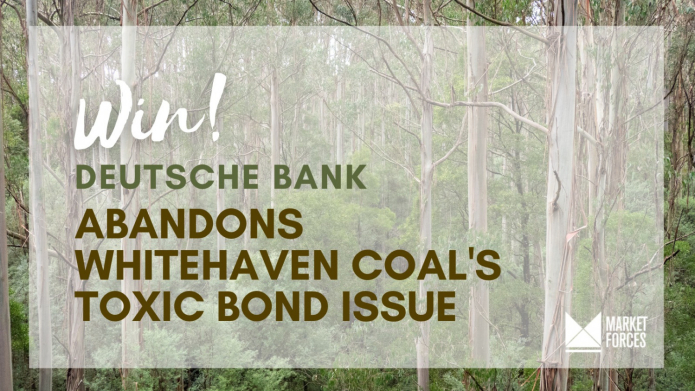 A media report in Germany confirmed publicly this week that Deutsche Bank has withdrawn from its involvement in a bond issue for climate-wrecking Whitehaven Coal, following a concerted people-powered campaign coordinated by Market Forces.

Deutsche Bank’s decision to walk away from Whitehaven’s bond issue is a huge win for our campaign to stop this dirty coal corporation building three new or expanded coal mines. Whitehaven’s proposed new or expanded mines are totally out of step with what is required to limit global warming to 1.5ºC or achieve net zero emissions by 2050. Numerous publications have highlighted that achieving these goals means ceasing all new coal projects and rapidly phasing out existing coal supply.

The campaign to get Deutsche Bank to walk away
Deutsche Bank’s withdrawal from Whitehaven’s bond issue follows a concerted public campaign by Market Forces and other community and civil society groups in Australia and Germany.

Our campaign kicked off in October 2021, after financial news service Debtwire reported Deutsche Bank had organised a “non-deal roadshow” for Whitehaven, and intended to act as bookrunner on any future bond deal. The Australian Financial Review subsequently reported Whitehaven was seeking to raise AU$ 1 billion on Asian bond markets.

After the potential bond deal was uncovered, Market Forces coordinated two hard-hitting newspaper advertisements in major German media outlets, thousands of our supporters wrote to Deutsche Bank about the deal, many more sent Christmas cards directly to the bank’s CEO, and hundreds of comments were left on the bank’s social media posts.

With the pressure building, we now have confirmation Deutsche Bank is out of the bond deal, capping off the end of an almost eight-month campaign that has united activists across two continents.

What’s next for the campaign to stop Whitehaven’s new coal mines?

Although Deutsche Bank has ruled out Whitehaven’s bond issue, it remains exposed to the coal corporation through its debt lending. Whitehaven has signalled it will seek to refinance that loan later this year.

Deutsche Bank’s policies of not financing new thermal coal mines and reducing its coal exposure to zero by 2025 should rule out its participation in this refinancing, but we know from its flirtation with Whitehaven’s bond issue the bank cannot be trusted to apply its policies consistently. That’s why we’ll be keeping a close eye on Deutsche Bank and making sure it upholds its stated commitments on climate action.

Meanwhile, the other key banks still remaining in Whitehaven’s credit syndicate are based in Australia, China and Japan. Australian banks NAB and Westpac play an important role – jointly providing over 20% of the funds in 2020 and helping to organise other banks’ participation in the deal.

We’ll be turning up the heat on NAB and Westpac this year and making sure they walk away from Whitehaven. You can find out more about our plans to take on the Australian banks at our webinar on 31 May (RSVP here). You can also contact the banks linked to Whitehaven Coal by filling out the action form on this page.