Home › News
HSBC coal phase-out passes but the battle is not won yet
Climate campaigners welcome AGM vote in favour of coal phase-out but say “the next six months are crucial”
By: ShareAction
2021-05-28
London
Contact: 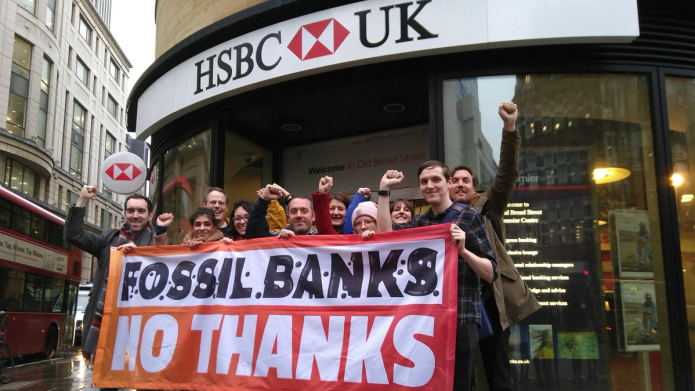 Fossil Banks, No Thanks! campaign action outside of an HSBC branch. Photo: Global Witness

HSBC shareholders today backed a management-proposed resolution committing the company to phase out finance for the coal industry by 2030 in the OECD and by 2040 worldwide. Preliminary results showed the resolution passing with over 99% of the vote.

The resolution was tabled by the HSBC board after it came under pressure from a separate climate motion proposed by a US$ 2.4 trillion group of shareholders led by ShareAction. The shareholders agreed in March to withdraw their resolution and put their support behind HSBC’s proposal.

Jeanne Martin, Senior Campaign Manager at ShareAction, said: “We’re delighted that our campaign has resulted in a binding commitment by HSBC to phase out coal, but the devil is in the detail and the next six months are crucial to ensure that this commitment is translated into robust sector policies.”

Part of HSBC’s resolution commits it to “publish by the end of 2021 a policy that will… provide further detail on the phase out plan, its scope and interim targets” and to “engage with Shareaction, representatives of the group of co-filing institutions and other stakeholders in the development of this policy.”

ShareAction is calling on HSBC to ensure that the bank introduces financing restrictions for companies throughout the coal value chain, including those that are highly dependent on coal and building new coal mines, coal plants and coal infrastructure, and calls on its remaining clients to publish phase out plans by December 2023 at the latest.

A recent report by Reclaim Finance found that HSBC gave US$ 15.2 billion through lending and underwriting to the coal industry between October 2018 and October 2020, including US$ 4.1 billion to companies with coal power expansion plans.

HSBC’s resolution commits it to set short and medium-term targets to align all of its financing (beyond the coal sector) with the 1.5C goal of the Paris Agreement. ShareAction urged investors to continue to engage with HSBC to ensure it sets ambitious targets in line with the latest science.

Last year, Barclays set an absolute target for its oil and gas portfolio, admitting that “is different because it cannot reduce its emissions intensity below a certain point (a barrel of oil cannot be de-carbonised), and so a reduction in absolute emissions is the more appropriate measure”. ShareAction argued that HSBC should set similar absolute targets for its oil and gas portfolio.

In March, the shareholders that backed ShareAction’s resolution wrote to HSBC’s CEO Noel Quinn and Chair Mark Tucker, warning that, “Whilst we have withdrawn the shareholder resolution this year, we may take further action next year if we are unsatisfied with the bank’s progress.”

Jeanne Martin said: “The next six months are crucial. We cannot afford to lose another year in the engagement process, so investors have to make their expectations very clear to HSBC as it implements its new commitments – and do so now.”

“More broadly, every investor which voted for the HSBC resolution has now acknowledged that banks should phase out from coal and set 1.5°C targets that cover all financing. As such, they should be making similar requests to all of their bank holdings.” “HSBC is far from the only climate laggard bank”, she added.

The HSBC AGM also saw sustainability-related questions from individual, retail shareholders on behalf of ShareAction. Sam Hayward asked whether HSBC would rule out financing the East African Crude Oil Pipeline, noting that Barclays, BNP Paribas and Credit Suisse have all stated that they will not finance the project.

Rebecca Warren asked whether HSBC would make biodiversity an engagement priorities for 2022 and publish sectoral expectations on the management of biodiversity-related risks and impacts for its investee companies and corporate clients in high-impact sectors. She noted that between 2013 and 2019, HSBC provided US$ 3.73 billion of finance and US$ 3.36 million of investment to the six largest agribusiness companies, including deforestation laggard JBS.