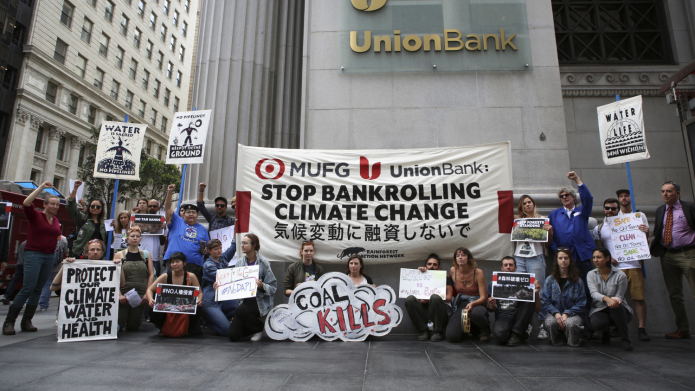 Japanese NGO Kiko Network, along with three individual investors, have just filed Japan’s second ever climate resolution on a Japanese financial institution, this time on Japanese megabank Mitsubishi UFJ Financial group (hereafter “MUFG”). The resolution calls on the company to adopt and disclose a plan to align its financing and investments with the Paris Climate Agreement. The resolution was filed on March 26th and received by MUFG today.

“While MUFG has strengthened its policies to some extent, it is currently in no way aligned with the Paris Agreement,” said Kimiko Hirata, International Director of Kiko Network. “In particular, as a business MUFG needs to respond to the financial and reputational risks posed by climate change, establishing a business strategy with short and medium term targets, and taking immediate substantive action if the bank is to align all financing, including corporate finance, with the Paris Agreement.”

To date, MUFG has established sustainability policies, and committed to zero out project financing of coal-fired operations by 2040. However, MUFG continues to be one of the leading financiers of fossil fuels and deforestation-linked activities around the world, investing and underwriting operations that are accelerating climate change on a global scale. Notably, MUFG was ranked the 3rd largest global lender to the coal industry over the last two years, the 6th largest fossil fuel banker over the last five years since the Paris Agreement, and the 7th largest banker of the palm oil industry over four years since Paris.

“MUFG’s failure to pivot from fossil fuel financing should be a major concern to shareholders, especially since its global competitors’ transitions are gathering pace,” said Megu Fukuzawa, Energy Finance Campaigner at Market Forces. “Pledging only for the reduction of coal power project finance is far from enough, given that all coal power stations must be shut by 2040 worldwide at the latest. MUFG should show how it plans to engage with its clients in order to get there.”

Under MUFG’s current policies, MUFG will not be able to achieve net zero emissions by 2050, which is critical for achieving the 1.5ºC goal. If MUFG truly intends to reach net zero, it must cease all financing to fossil fuels and deforestation without exception.

“As one of the world’s largest bankers of Conflict Palm Oil, MUFG is financing the destruction of carbon-rich rainforests and peatlands, but has failed to disclose this climate impact,” said Toyoyuki Kawakami, Japan Representative of Rainforest Action Network. “With this resolution, MUFG must chart a path that is aligned with a maximum global temperature rise of 1.5ºC that includes no further financing of deforestation.”

In recent years, overseas financial institutions and insurers have progressively retreated from financing coal power. Most recently UK-based HSBC announced the decision to phase out finance to coal-fired power generators and related developers by 2040, with a progress report on the creation and announcement of its new strategy, including a short to medium-term strategy for all sectors, to be announced at the annual general shareholder meeting in May. This month, US-based Citigroup became the first major US bank to commit to restrict financing for companies expanding coal power and to phase out financing for nearly all coal power companies over the next two decades.

“Keeping temperature rise to 1.5ºC is a race against time, and relying on technologies that don’t exist today, such as negative emissions, is the same as abdicating responsibility for younger and future generations,” said Takayoshi Yokoyama, Japan Representative of 350.org Japan. “MUFG must take responsibility for solving the climate crisis, as is consistent with their pledge under the UN Principles for Responsible Banking.”

This resolution aims to ensure that investors will be able to appropriately assess the climate risk posed by MUFG’s financing and investments in order to decide on their investments accordingly, as well as encourage MUFG to reduce its climate risk and maintain its corporate value.