Home › News
Finance goes to war: Intesa Sanpaolo between Russian fossil industry and US gas
Intesa Sanpaolo is the Italian financial group with the closest relations with Moscow
By: ReCommon
2022-06-08
Rome
Share this page: 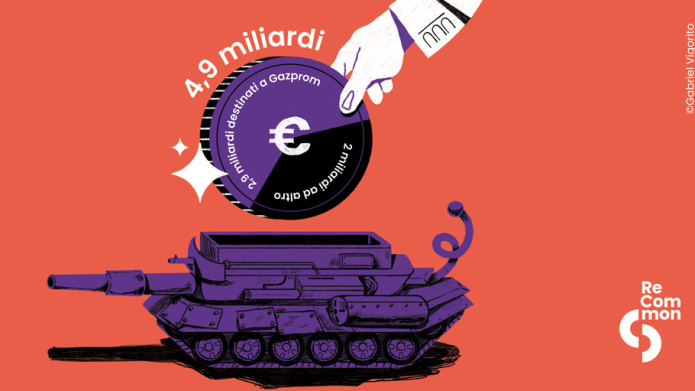 Three months after the date that disrupted the lives of millions of people in Europe and the rest of the world by kicking off a new spiral of violence in Ukraine and repression in the Russian Federation, ReCommon publishes the report ‘Finance goes to war: Intesa Sanpaolo between Russia’s fossil industry and US gas’.

Intesa Sanpaolo is the Italian financial group with the closest relations with Moscow, looking after all major Italian investments in Russia and vice versa. Between 2016 and 2021, financing granted to the Russian fossil industry amounts to $ 4.9 billion, out of which $ 2.9 billion to Gazprom alone, the main state-controlled energy company, which can make the best of the situation when it comes to Russian gas exports to Europe, on which the latter is dependent, Italy first and foremost. The profits of these companies represent the coffer fueling the ongoing military offensive in Ukraine.

In addition to numbers, when talking about ‘exposure to Russian business’ there are also other data to consider: strong men in key positions and curious coincidences. These relate to the non-inclusion of Gazprombank among the Russian banks subject to economic sanctions by the European Union, through its exclusion from the SWIFT system. Intesa Sanpaolo and Gazprombank hold MIR, the first Italian-Russian investment fund. Moreover, the only Italian on the board of the SWIFT system is from Intesa Sanpaolo itself: Banca Intesa Russia, to be precise.

In the same years, the most important Italian bank has managed to break into the collective imagination as a sustainable bank serving the territories. Nothing could be further from reality: between 2020 and 2021, Intesa Sanpaolo financed the coal, oil and gas sectors with $9 billion, out of which 6.4 billion in 2021 alone: a +146% increase over the previous year.

In terms of investments, as of January 1, 2022, they amounted to $ 4 billion: +50% from the previous year. It is precisely because of its mix of credit operations and investments in the fossil fuels business that Intesa Sanpaolo can be called the ‘No.1 fossil bank’ in Italy.

While waiting to see what will become of Intesa’s business in Russia, the group is also exposed in the United States, to which Italy has chosen to tie itself in a double bind for much of its new dependence on gas.

The gas coming to Europe from the United States is mainly produced in the Permian Basin, through the use of ultra-invasive operations such as fracking or horizontal drilling. It is estimated that between 2020 and 2050, the burning of all oil and gas reserves in the Permian Basin could produce the emission of 46 billion tons of CO2: a real ‘climate bomb’.

In the business of US-made gas, Intesa is already well positioned – primarily on the side of export terminals, ready to jump on the bandwagon of the ‘fossil winners’ of this war: between 2016 and 2021, it has in fact granted US$ 1.9 billion in loans to the multinationals most involved in Permian Basin oil and gas production and transportation, out of which US$ 830 million was for liquefied natural gas (LNG) projects.

"We demand that Intesa Sanpaolo implement an exit plan from the entire coal sector, stop financing fossil projects in the Arctic, and start divesting from all those companies that are expanding their fossil business as we speak. We also call on the group to immediately end any relationship with the Russian fossil industry", comment Simone Ogno and Daniela Finamore of ReCommon, authors of the report. "Investors, civil society organizations, environmental and climate justice movements are in the front row to denounce the group’s dirty business: very few now believe Intesa Sanpaolo’s greenwashing, which continues to paint a black business green", they conclude.