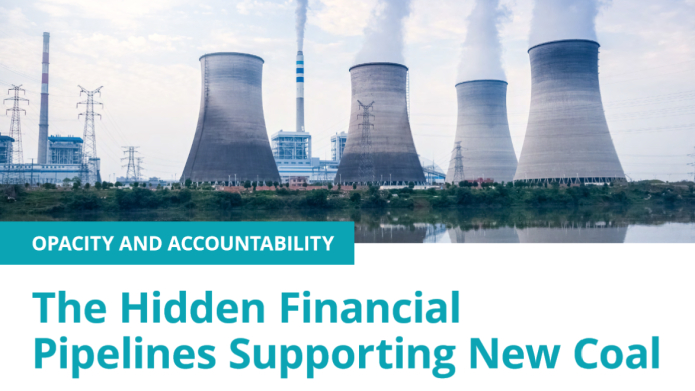 Financial institutions continue to funnel tens of billions of dollars into new coal projects, even as many of them have made public commitments to move away from financing coal and accelerate the transition to net-zero emissions.

"Opacity and Accountability: The Hidden Financial Pipelines Supporting New Coal" uncovers the discrepancy between what financial institutions publicly commit to and what their policies continue to allow, with loopholes enabling the continued financing of new coal projects. The report shows that without immediate course correction, institutions’ hollow coal policies will lock in coal power long after 2030, making it impossible to keep global warming within the limits that science demands to avoid the worst impacts of climate change.

Current finance industry restrictions, which typically apply to designated coal project finance, have worked to a point. But few institutions restrict general corporate finance, which accounts for nearly 80% of the financial pipeline.

The report breaks down the range of funding mechanisms and sources for new coal infrastructure and identifies the major financial institutions keeping these projects afloat — many in China, which accounts for roughly half of the world’s coal consumption. Outside China, dozens of institutions — including Citi, Bank of America, and JPMorgan Chase — provided a total of US$ 338 billion in loans and underwriting to coal project developers during the period 2019–2021. This despite 13 of the largest 20 banks outside of China being members of the Net Zero Banking Alliance (NZBA) and committing to net zero emissions by 2050 by phasing out coal.

The report finds similar trends for asset managers and insurers. Despite being a member of the Net Zero Asset Managers initiative (NZAM), BlackRock’s portfolio includes coal developers that are planning to build over 93 GW of new coal-fired capacity, an amount as large as the operating coal plant fleets of Japan and Germany combined. Several members of the Net-Zero Insurers Alliance (NZIA), including Beazley, Allianz, and Hannover Re, continue to hold bonds and equities in companies developing coal projects and provide insurance that helps make new coal projects more appealing to investors.

In September 2022, the UN-backed Race to Zero campaign updated its principles. Under the new criteria, that each member of Race to Zero — including the investors, banks and insurers who are part of the Glasgow Financial Alliance on Net Zero (GFANZ) — “shall phase out its development, financing, and facilitation of new unabated fossil fuels assets, including coal, in line with appropriate global, science-based scenarios.”

''This report makes it clear: the policies currently in place to stop coal financing are not doing enough. It’s an inconvenient yet stark reality for the dozens of members of the net-zero alliances that firmer and more comprehensive policies are needed. It is time for the financial sector to get serious about phasing out coal. The world depends on it," Ted Nace, Executive Director, Global Energy Monitor.

Groups contributing to the report include Reclaim Finance and urgewald.