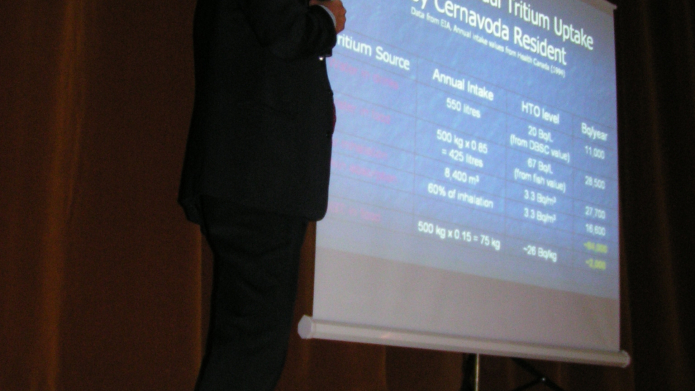 Today, the international environmental organisation Greenpeace presented a study on tritium emissions from the Cernavoda nuclear power plant. It commissioned the study from the international tritium expert Dr. Ian Fairlie from the United Kingdom. The study recommends that pregnant women, nursing mothers, and children (under 4) should not live within 10 kilometres of the Cernavoda nuclear power plant, and that people living within 5 kilometres should not consume food from their gardens, beehives, orchards, and wild foods growing nearby. The study also calls for a special commission to be set up to study Cernavoda tritium emissions and recommends that plans for Cernavoda 3 and 4 be halted until further studies are completed .

Dr. Ian Fairlie, an independent expert who worked for several British government departments and regulatory agencies and currently advises NGOs, the European Parliament and local authorities on tritium issues, presented his findings to an audience of Romanian scientists, representatives from Nuclearelectrica, the Ministry of Environment, the town of Cernavoda and several institutes.

Tomorrow Dr Fairlie will present his findings to the population of Cernavoda . He states “The CANDU 6 design that is used at the Cernavoda nuclear power station is known for its far larger emissions of tritium than other reactor designs. There is much scientific uncertainty around the health impacts of tritium. Authorities should take this uncertainty seriously and act preventively rather than expose the population to possibly large risks.” He explained that, in particular, pregnant women as well as small children are more sensitive to radiation risks.

Jan Haverkamp, Central Europe energy expert for Greenpeace, commented: “The Environmental Impact Assessment of the Cernavoda reactors 3 and 4 downplays the tritium debate. Not even the proposal for an Environmental Authorisation of the units 1 and 2 that was issued day before yesterday reflects this debate. Greenpeace finds that inexcusable and is of the opinion that the people of Cernavoda have the right to base their own private decisions on the fullest information on the matter.” He added: “If I were to live near a CANDU reactor, I would like to talk with my partner and weigh all factors – the higher risk because of tritium, our work, our social contacts and so on. I would not want to be patronised by authorities who say that everything is OK when serious doubts exist.”

Greenpeace commissioned Dr. Ian Fairlie with this study for several reasons. First of all, Dr. Fairlie is the author of a similar study, also commissioned by Greenpeace, of the effects of tritium emissions from Canadian CANDU reactors . Because of its findings, Greenpeace is of the opinion that it had the moral obligation to extend this study to CANDU reactors elsewhere in the world. Also, Greenpeace participates actively in the Environmental Impact Assessment (EIA) of the Cernavoda 3 and 4 reactors and has concluded that the EIA report was heavily biased towards nuclear power. It has demanded in its comments a more balanced view including also negative aspects of the technology like the effects of large accidents, terrorist risk, the effects of nuclear fuel production, the lacking solution for the problem of nuclear waste and the true risks of tritium emissions – all lacking in the current report .

Finally, adding up all the problems that surround nuclear energy, Greenpeace demands that the Romanian government looks more seriously at the alternatives to nuclear power, including the policies in the recently published Energy evolution Scenario . This scenario points out that a focus on energy efficiency, decentralisation of electricity production and the development of renewable energy sources is a not only a viable but also cheaper alternative to the current energy policy of Romania, which is based mainly on new nuclear power and fossil fuels . Haverkamp: “Nor in the Romanian energy policy debate of this moment, nor in Cernavoda's Environmental Impact Assessment such an alternative is seriously included. Why continue exposing people to nuclear risks when there is a better alternative? Why do we not look seriously at the alternatives?”

Notes for editors:
Tritium is the radioactive form of hydrogen. It is generated in very large amounts in CANDU reactors because of neutron radiation of heavy water – an essential part of these reactors. It is impossible to contain tritium in the nuclear power station and CANDU reactors emit several tens or hundreds of times more tritium than pressurised water reactors or boiling water reactors used elsewhere. Tritium can pose a health risk when incorporated in the human body, where its beta-radiation can damage cell-function and DNA.

The results of the study are available on internet:

The presentation by Dr. Ian Fairlie in Cernavoda will start 12:00 in Casa de Cultura "Ioan D.Chirescu" and is open to all inhabitants of Cernavoda.

EREC, Greenpeace, Futue Investment; a Sustainable Investment Plan for the Power Sector to Save the Climate, Amsterdam (2007) Greenpeace; http://www.greenpeace.org/international/press/reports/future-investment