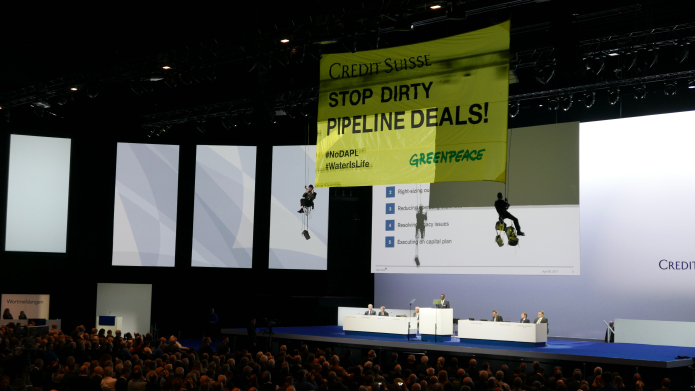 A report commissioned by Greenpeace Switzerland has revealed the level of greenhouse gas emissions which Credit Suisse and UBS have been responsible for between 2015 and 2017. By financing companies active in extreme fossil fuels, the top two Swiss banks are responsible for the emission of 182.9 million tonnes of greenhouse gases. In 2017 alone, Credit Suisse and UBS financed 93.9 million tonnes of CO2 equivalent emissions, double the level of Switzerland’s annual emissions. The bulk of these emissions have been financed by Credit Suisse, finds the new report.

Greenpeace Switzerland commissioned both ISS-Ethix in Zurich to calculate the emissions resulting from this financing and right.based on science in Frankfurt to evaluate them. The report shows that in 2015, 2016 and 2017 the two major Swiss banks financed the emission of 182.9 million tonnes of greenhouse gases via USD 12.3 billion. Credit Suisse was found to be responsible for more than two thirds of these emissions. Between 2015 and 2017, the bank trebled its financed emissions, as a result in particular of its support for coal. At UBS, a steady decline in financed emissions was found over the period.

Two years after the signing of the Paris Climate Agreement, 2017 saw Credit Suisse and UBS deliver the greatest climate damage via financed emissions of 93.9 million tonnes of greenhouse gases from the 47 companies studied. This amounts to approximately double the annual emissions of Switzerland.  Responsible for 82.6 million tonnes, Credit Suisse was the most implicated in this climate-damaging financing.

Eleven of the companies financed by Credit Suisse and UBS, among them Duke Energy, BP, American Electric Power and RWE, are known to be active in the climate-sceptic lobby, the goal of which is to prevent or hinder climate protection legislation.

Risks for companies and banks

With their financing, Credit Suisse and UBS are not only harming the climate, they are taking major risks themselves. The new report analysed the extent to which 34 of the 47 companies are subject to physical climate-related risks – for example, extreme weather events such as heavy rainfalls, storms and heatwaves – and how soon these risks may occur. Among other things it is evident that, compared to UBS, Credit Suisse is channelling more resources at companies exposed to high weather risks in the short term.

"As climate risks become reality, from both a physical and regulatory point of view, banks risk losing a lot of their investments. This is why more and more investors and banks are viewing climate change to be a financial risk and not just a risk to their reputation.

"This report shows once again that Credit Suisse and UBS are fueling climate change. They should be playing an active and leading role in the transition to a low-carbon economy."

Greenpeace is calling on the two big banks to show the public concretely how they intend to align their financial flows with the goals of the Paris Climate Agreement. There is also a need for an immediate exit from the financing of companies involved in the coal and tar sands sectors.

A summary is also available at: https://www.greenpeace.ch/wp-content/uploads/2019/01/Greenpeace_FactSheet_EN.pdf

It should be noted that between 2015 and 2017 the ecological footprint of the two banks is likely to have been much higher than shown in this report. It takes into account the effects on the climate of the banks’ financing of a limited number of only 47 companies active in extreme fossil energies.

This report was based on the ‘Banking on Climate Change: Fossil Fuel Finance Report Card 2018’, produced by Rainforest Action Network, BankTrack, Indigenous Environmental Network, Oil Change International, Sierra Club and Honor The Earth, and supported by more than 50 organisations around the globe including Greenpeace USA.

Extreme fossil fuels are unconventional hydrocarbons such as extreme oils (oil sands, oil extracted from the Arctic and the seabed, liquefied natural gas (LNG), coal mining and coal-fired power plants. This categorisation of fossil fuels is based on reports from the Carbon Tracker Initiative, which identifies oil and gas projects with the highest financial risks when it comes to limiting global warming to well below 2°C. The coal sector is implicated because of its incompatibility with climate stability and its severe effects on the environment, health and human rights.

3. According to the Inventory of Greenhouse Gas Emissions, Switzerland emitted 48.3 million tonnes of greenhouse gases in 2016. See: https://www.bafu.admin.ch/bafu/en /home/themes/climat/donnees-indicateurs-cartes/donnees/inventaire-des-emissions-de-gaz-a-effet-de-serre.html