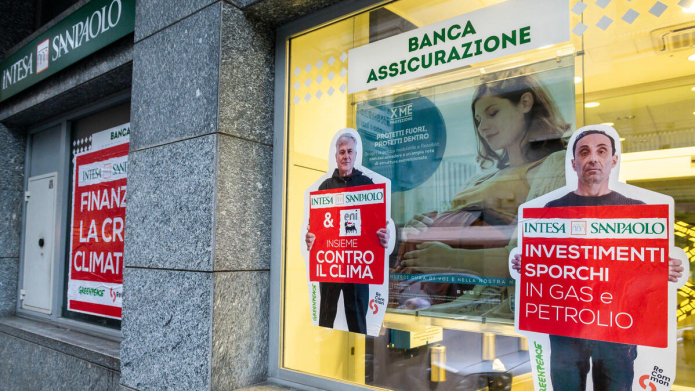 This morning activists from Greenpeace and ReCommon have symbolically shut down branches of Intesa Sanpaolo, the largest Italian banking group, listed in the top 30 of the world’s 100 largest banks, major provider of funds to the fossil fuel sector.

In compliance with the COVID-19 restrictions, activists used stickers representing people protesting against the Italian group ahead of its Annual General Meeting that will be held behind closed doors differently from European competitors who have guaranteed to shareholders the possibility to attend remotely.

In the same morning, representatives from environmental and climate movements- including Extinction Rebellion and Fridays for Future – gathered at the entry of Intesa headquarters of Intesa Sanpaolo in Turin. The mobilization takes place at the same time of the release of the report “Fake Sustainability: Intesa Sanpaolo against climate, the environment and local communities”, where ReCommon and Greenpeace analyze Intesa’s high exposure to fossil fuels.

The Italian group affirms to play a role as a sustainable bank at the service of local communities. The fact is that in 2020 Intesa financed the fossil fuel industry for a total of € 2.7 billion in loans and € 2.7 billion in investments. In addition to its current weak commitments on coal prolonging the group’s exposure to the most polluting among fossil fuels, it is a case of serious concern the bank’s unconditional support to oil&gas, especially in relation to exploitation of the Arctic.

“Intesa’s portfolio boasts clients who foster the devastation both of the Arctic region, already heavily affected by the impacts of the climate crisis, and of the Permian Basin, the most important hydrocarbon production area, a true climate bomb of our time”, affirms Simone Ogno, Finance and Climate Campaigner at ReCommon. “Worthy of note are also small and medium-sized investments in those companies that, through their own fossil fuel infrastructures, are having negative impacts on marginalized communities in the United States and Canada.”

Greenpeace Italy, ReCommon, Extinction Rebellion and Fridays for Future have also symbolically awarded Intesa as the top bank enemy of the climate. With such an action, the associations denounce the greenwashing strategy implemented by the Italian group.

“Intesa Sanpaolo is a champion in Greenwashing”, affirms Luca Iacoboni, Climate and Energy Campaign Manager at Greenpeace Italy. “While Italy is affected by impacts of climate change like floods, droughts and other extreme climatic phenomena, the largest national bank contributes to exacerbate the climate crisis by continuing to invest in gas, oil and coal. At the same time, it misleads its own customers with “green” advertising on the media.