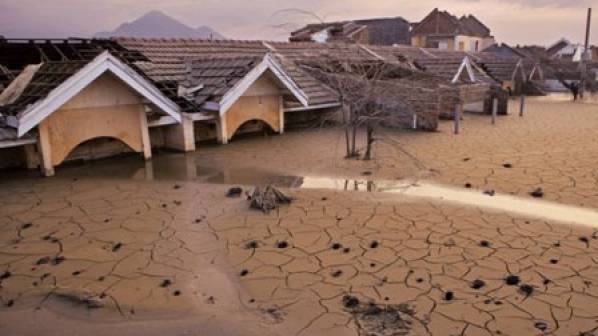 Major international banks such as Credit Suisse, Barclays, Fortis Group, Merrill Lynch & Co. and Natixis are injecting hundreds of millions of Euros into a set of companies responsible for a catastrophic mud volcano in Indonesia, Friends of the Earth International/ Europe has revealed in two new reports launched today. Toxic mud has been gushing from the ground in Sidoarjo, Indonesia since May 2006, following drilling operations by the company Lapindo Brantas Inc.

Friends of the Earth International has demanded that the international banks withhold any further financing from Lapindo Brantas Inc until the company pays compensation for the damage from the disaster. Lapindo Brantas has so far failed to restore the damaged area or compensate the vast majority of the 3,500 families who have been forced from their homes.

Paul de Clerck, corporate campaigner of Friends of the Earth International, said: "Funding from international banks like Credit Suisse and Fortis enabled Lapindo to start their gas exploration. Now the banks must accept their role in the disastrous mudflow created by the drilling. Any new loan from the banks should be conditional on Lapindo paying compensation for all the damage it has caused in Sidoarjo."

So far all efforts to stop the mud flow have failed and the catastrophic situation of the mudflow victims remains unresolved. The Indonesian government has ordered Lapindo to pay US$ 435 million in compensation to victims and for efforts to halt the mud. But Lapindo is shirking its responsibility for the enormous damage it has created. It denies causing the mud flow and argues that the compensation costs are too high. A year after the mud began to flow, Lapindo has only paid partial compensation to a small number of victims.

The Indonesian company Energi Mega Persada, owning 50% of the Brantas Production Sharing Contract, has tried to dodge its liability several times by selling its assets to dubious overseas companies. Fortunately, these efforts were stopped by the Indonesian government.

Farah Sofa from Friends of the Earth Indonesia / WALHI said: Lapindo Brantas tries to claim that the mudflow in Sidoarj Indonesia, is a natural disaster, but this is not true. Numerous experts have judged that the incident is a direct consequence of Lapindo Brantas irresponsible actions".

As outlined in the reports by Friends of the Earth International, Credit Suisse, Barclays, Merrill Lynch, Natixis and Fortis have provided loans of several hundreds of millions of Euros to Energi Mega Persada (Indonesia), PT Medco E&P Brantas (Indonesia) and Santos (Australia), the three companies owning Lapindo Brantas Inc. Without this financial support, Lapindo would not have been able to explore the gas field in Sidoarjo.

Friends of the Earth, Banktrack and Berne Declaration have addressed the banks with their responsibility and urged them to take steps to guarantee that Lapindo pays all costs related to restoration and compensation . Barclays, Merrill Lynch and Natixis did not respond at all.

Credit Suisse, the bank that has provided the largest loans, said that they expect Lapindo to take its responsibility. But since May 2006 Credit Suisse has provided a new loan of US$ 126 million to Energi Mega Persada without inserting conditions to ensure that Lapindo actually pays for the damage they caused.

Fortis has refused to take any responsibility or to take up the issue any further because it doesn’t finance the Brantas project itself. Friends of the Earth insists that Fortis does indeed have a responsibility as it finances two of the three owners of the Brantas Production Sharing Contract, the agreement under which the gas exploration is taking place. Fortis Bank is an important creditor and provides financial services to the companies.