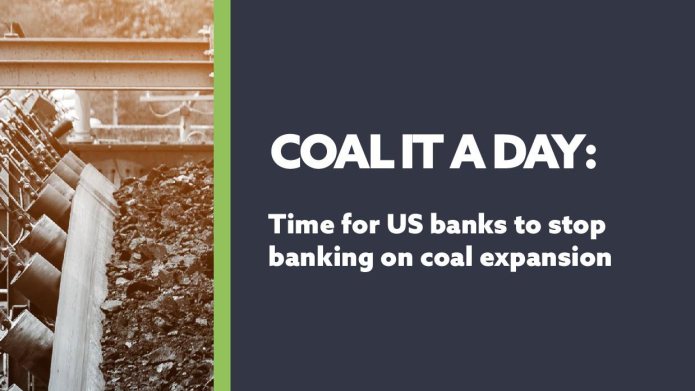 Paris, September 19, 2022 – While the top three leaders of the Glasgow Financial Alliance on Net Zero (GFANZ) recently issued a statement calling all members for an end to financing of new coal projects (1), a new report (2) released today by Reclaim Finance reveals that major US banks keep pumping billions of dollars into companies that are developing new coal mines, plants, and infrastructure. While policies adopted by US banks after the Paris agreement are toothless to stop coal expansion, financial research also sheds light on many transactions in support of coal developers after the banks joined the Glasgow Financial Alliance on Net Zero (GFANZ). As Climate week begins and COP27 approaches, Reclaim Finance calls on US banks to immediately complement their net-zero pledges with real action and implement robust coal policies.

Going against the Intergovernmental Panel on Climate Change (IPCC) and the International Energy Agency (IEA) 1.5°C recommendations (3), the big US banks continue to finance companies that are developing new coal projects worldwide. Since 2019, JPMorgan Chase, Citigroup, Bank of America, Morgan Stanley, and Goldman Sachs have collectively provided US$40 billion to coal developers. (4)

Lucie Pinson, CEO and founder of Reclaim Finance, comments: “US banks are leading us to climate disaster. Their unrelenting support to developers of new coal projects is reckless. By continuing to finance new coal mines, power plants, and infrastructure, they are jeopardizing our chances at building a breathable future. In light of ongoing extreme climate events, they cannot afford to lose any more time and must urgently walk the talk and stop financing coal expansion.”

US banks stopped providing dedicated or project financing to new coal projects, but this has little real-world impact because the bulk of their financing to the coal sector is provided through corporate financing for which US banks have very loose restriction criteria. Unlike 42 financial institutions which have already put an end to the financing of developers of new coal projects, US banks are lagging far behind with weak coal policies that let funds flow to coal expansion.

As a result, US banks continue to finance companies such as Glencore, Adani, and Mitsubishi, which are among the largest coal developers and have a disastrous human rights record (4). Moreover, financial research by Reclaim Finance found that joining GFANZ in 2021 and committing to net zero by 2050 did nothing to stop them from financing coal developers.

Cynthia Rocamora, private finance campaigner at Reclaim Finance, comments: “Making net-zero pledges but pouring money into coal expansion is climate hypocrisy. US banks are not only running the risk of costing the world its climate objectives, they are also causing immediate irreversible harm to local communities. With less than a year to comply with the updated Race to Zero criteria which, once again, emphasizes the urgent need to stop developing new coal projects, US banks must immediately adopt coal policies that match their commitments.”

Notes
(1) The co-chairs of the Glasgow Financial Alliance on Net Zero (GFANZ), Michael Bloomberg and Mark Carney, and the vice-chair Mary Schapiro, issued a statement entitled “No New Coal” on August 22, calling for an end to the financing of new coal projects. They should be commended for sending such a
clear message on coal — and for referring to the new Race to Zero requirement for GFANZ members to “phase down and out” support for all “unabated” fossil fuels. However the statement was made only in their personal capacities and is not an official GFANZ statement.
(2) Read our report here.
(3) The IEA explicitly states that there is no need for investments in new fossil fuel supply in a 1.5°C pathway. The IPCC also highlights that fossil fuel reserves, under production or planned for production, overshoot the 1.5°C carbon budget.
(4) Data from the financial research on the financial flows to companies on the Global Coal Exit List.
(5) For instance, Glencore’s Valeria coal mine project in Australia is planned on a site that is home to over a dozen threatened species, there are also three threatened ecological communities that would be affected by the project. Adani’s Carmichael coal mine has drawn criticism for its impact on the great barrier reef. The company’s expansion plans are also denounced by campaign groups for their impact on local communities and the environment. Mitsubishi is developing the controversial Vung Ang II coal power plant in Vietnam, which has been opposed by many stakeholders, including civil society and investors, for its impact on the health of affected communities. Those who oppose coal expansion in Vietnam face severe retaliation, including long jail sentences. Four of Vietnam’s most prominent environmental leaders are currently in jail for criticizing the country’s coal power expansion. Read more information in our report.