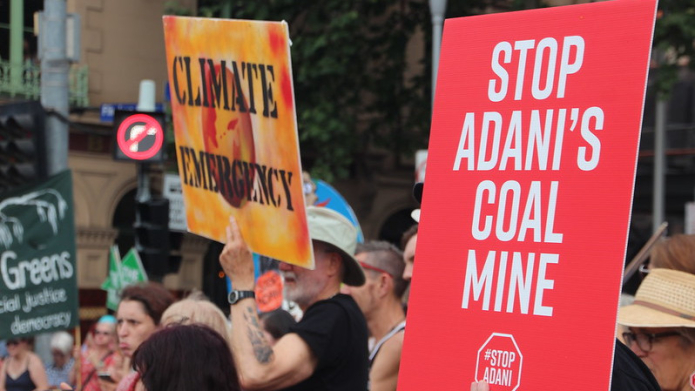 Financial news sources confirmed last week that Standard Chartered and Barclays have funded Adani Enterprises, the Adani Group subsidiary pursuing several new thermal coal mining projects, including the disastrous Carmichael mine in Australia. The US$ 250m debt facility provided by the two UK banks has an option to raise an additional US$ 200m. The deal closed on the 9th of May.

The loan was made to Adani Airport Holdings Ltd (AAHL), a wholly owned subsidiary of Adani Enterprises. As money is fungible, any financing of any Adani Group entity frees up capital which Adani can channel to the Carmichael coal mine, which is funded entirely with internal Adani Group funds. This is especially true for Adani Enterprises, the parent company of Bravus Mining and Resources (formerly Adani Mining) which is the subsidiary building, owning and operating the mine and associated rail line.

Barclays and Standard Chartered have both publicly promised not to fund Carmichael (see quotes below). While neither bank has loaned directly to the Carmichael coal project, their financing of the Adani Group more broadly is a breach of that promise, as the funds they are helping Adani raise could be indirectly funding the new coal mine by freeing up untied capital.

“Both parties have agreed to end the bank’s role in the Carmichael project…We will not provide project finance or project finance advisory services to new standalone, non captive thermal coal mining projects”

Both banks have a history of financing the Adani subsidiaries directly linked to new coal projects. Apart from this most recent loan, Standard Chartered was part of a previous bridge loan to Adani Enterprises, and both banks have arranged numerous bond issues for Adani Ports, the company which set up the coal haulage service for the Carmichael mine, and is the operator and part-owner of the North Queensland Export Terminal (NQXT), the port via which Carmichael coal will be exported.

The Carmichael thermal coal project is arguably the most environmentally and socially contentious project in Australia’s history. It is being contested by Traditional Owners that have not given their consent to the mine, and continue to resist it. It is already threatening the region’s water supply, putting agriculture at risk. It would increase industrialisation in the already distressed Great Barrier Reef World Heritage Area. Most significantly, it would produce enough coal over its lifetime to emit 4.6 billion tonnes of CO2 into the atmosphere, equivalent to over eight years of Australia’s annual greenhouse gas emissions, fuelling more bushfires, floods and heatwaves. It is the first mine in the Galilee Basin – and will make it easier for more mega-mines to be built.

Additional to the incredibly toxic Carmichael project, the Adani group has plans to massively expand into fossil fuels, with, as of July 2021, a further 72 million tonnes per annum (mtpa) of new thermal coal mining capacity to be owned, developed or operated (since then Adani Enterprises has purchased at least another five new coal blocks), doubling its coal-fired power capacity to 24 gigawatts (GW), and a crazy coal-to-plastics plant. This makes Adani one of the biggest developers of new coal mines on Earth.

In meetings with Market Forces, both banks have attempted to justify their support for the Adani Group by falsely claiming that they are helping Adani transition to clean energy. However, Adani Group’s significant investment in new fossil fuel projects shows it is not transitioning to clean energy, and this claim cannot stand up to scrutiny when the finance Barclays and Standard Chartered provide are in large part to Adani Enterprises and Adani Ports, the Adani group subsidiaries most exposed to coal mining, coal transportation and other high-emissions activities.

Adding insult to injury, media reports have revealed that Barclays, Standard Chartered and Deutsche Bank are financing Adani’s acquisition of Holcim AG’s cement business in India. Evidently, these banks see no issue with Adani’s expansion into another emissions-intensive industry.

Whether its devastating floods in Australia or deadly heatwaves in India, we are already experiencing the effects of the climate crisis. By continuing to lend to a company working to massively increase its thermal coal mining capacity, Barclays and Standard Chartered demonstrate their climate commitments and promises are meaningless.