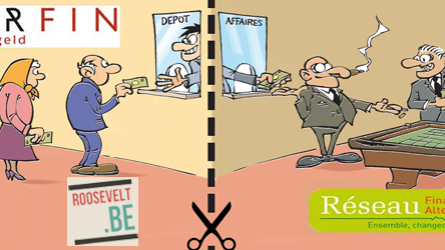 Together with our partners RFA (sister organization in French speaking Belgium) and the Roosevelt Collective (a citizen movement), Fairfin has launched a petition calling for a strict separation of banks in Belgium.

We have been waiting for five years for fundamental change in the financial sector, as was promised in the aftermath of the 2008 crisis. Recently the Belgian government has announced a new banking law, incorporating a separation of banks, bringing hope on this front. Unfortunately, we have many reasons to believe that the proposal will be weak, the weak regulations in France and Germany among them. We really need to avoid a half-hearted separation, tailored by the financial lobby. That is why we need to do more than waiting helplessly.

Last year Fairfin investigated the extent to which the Belgian banking sector was involved in the real economy. We found that the risky business models from before the crisis were still intact. Some banks still have huge trading portfolios, seeking short-term profits. In good times this generates major profits for the industry, including nice bonuses and booming stock markets. However, if the gambling goes wrong, society pays the price.

This is exactly why Fairfin shoulders this campaign: banks should be separated to prevent risky trading activities being guaranteed by tax payers.

A strict separation is necessary for the following three reasons:

-      It prevents risky trading activities being guaranteed by tax payers

Together with our partners, we are aiming for 100,000 signatures to boost political pressure in Belgium for effective regulation.

We have been collaborating on this theme with Finance Watch, which runs an European campaign on sustainable finance. Their (technical) assistance proved to be vital.