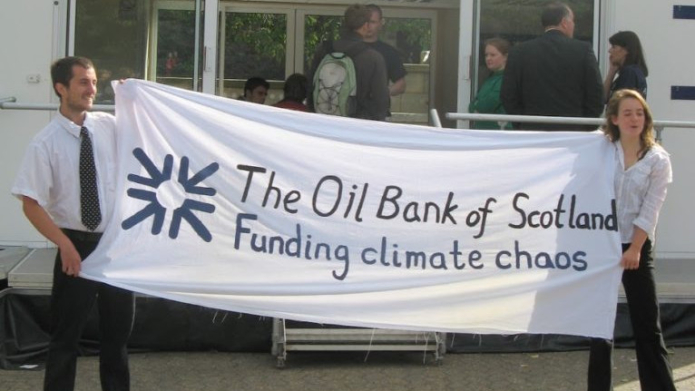 RBS, the once self-styled 'oil and gas bank', can become a climate leader under new leadership. Photo: People and Planet

Thirty-one civil society groups from around the world have sent an open letter to Alison Rose, the newly appointed CEO of the Royal Bank of Scotland (RBS), calling on her to turn the lender into a climate change leader by formally ending the bank's financial support for the coal, oil and gas sectors.

The groups also welcomed Rose’s appointment as the first woman to lead one of the UK’s ‘big four’ banks. The new RBS CEO is an advocate of gender equality, and has thrown light on the challenges faced by women in the banking sector as well as supporting women into business.

In their letter, the groups lay out the case for Alison Rose to take on another challenge when she takes over from the bank’s outgoing chief executive Ross McEwan on 1 November: to make RBS the “first major bank to formally end its financing for fossil fuels.”

The groups refer to the latest NGO analysis which shows that RBS financing of fossil fuel companies is now negligible, putting the state-owned bank in prime position to show real climate leadership by definitively ending its support for the sector.

RBS decided in August to rule out financing for oil and gas drilling or exploration in the endangered Arctic National Wildlife Refuge, a move which followed earlier announcements from the bank that it would no longer provide finance for coal mine, coal plant and tar sands projects. However, RBS’s policy restrictions do not close off the possibility of future support for new conventional oil and gas projects or for all coal companies seeking to expand their activities.

RBS is one of 45 international private sector banks to have introduced policy restrictions on their coal financing, and one of a smaller group of banks which has introduced restrictions on tar sands and Arctic oil financing. NGOs believe that RBS, which this week became a founding signatory of the UN’s Principles for Responsible Banking, can now go further than its peers and lead by example.

“RBS fossil fuel lending might be close to nothing in practice, but if this is not translated into necessary policy changes, the bank is keeping its doors open to potential new fossil fuel finance. As the climate crisis intensifies, and with growing global consensus that fossil fuel expansion has to end urgently, we’re hopeful that new CEO Alison Rose will see the business and sustainability case for ending the bank’s fossil fuel financing, and thereby position RBS as the climate leader in the banking sector.

“What’s more, Glasgow’s hosting of the UN Climate Summit in 2020 is the perfect opportunity for RBS to take swift, ambitious and very timely climate action.”

“The burning of fossil fuels is the key driver of climate change. By publicly committing to stop financing the businesses who want to extract, produce or sell fossil fuels, RBS would send a clear message that they are serious about responding to the Climate Emergency. This would be a remarkable, positive transformation for an institution that marketed itself as 'the oil and gas bank' just over a decade ago.

“To ensure that we deliver the necessary climate action, we need our financial institutions to end their support for dirty energy and invest in a just transition to a zero carbon economy.”

1. The Banking on Climate Change Report 2019 analysed the financing from 33 private sector banks for 1,800 fossil fuel companies. It found RBS support for these companies dropping to $0 in 2018, from $3.7 billion in 2016 and $662 million in 2017. These values are based on the report’s methodology which considers if banks have lead transactions – lending or underwriting – to the fossil fuel companies in question. In 2018, RBS was found not to have led any such transactions, largely linked to the bank’s post-crash global retrenchment which now sees it focusing on customers in the UK and Ireland and western Europe.