Home › News
Equator Principles put on notice by CSOs to commit on climate, nature, human rights, and pandemics, ahead of 20th Anniversary in 2023
BankTrack, the Women’s Earth & Climate Action Network and 25 CSOs sent an open letter to the Equator Principles Association ahead of its AGM outlining strong commitments to be made
By: BankTrack & WECAN
2022-10-14 Contact: 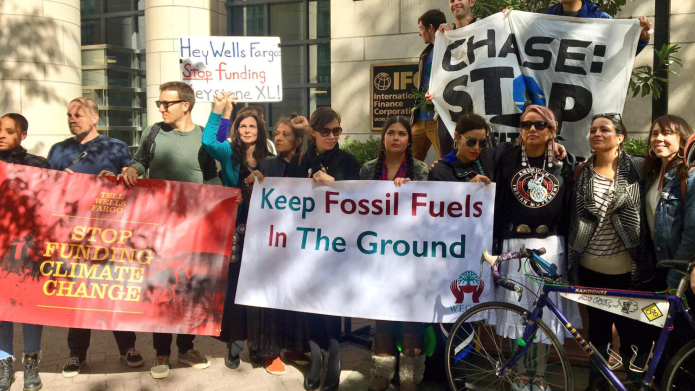 Protest outside the annual meeting of the Equator Principles in Washington DC in 2018. Photo: Sierra Club via Twitter

In an open letter to the Equator Principles Association (EPA), 25 civil society organisations led by BankTrack and the Women’s Earth and Climate Action Network (WECAN) call upon the EPA to make a renewed commitment on climate, nature, pandemics, and human and Indigenous rights, before the Principles’ 20th anniversary next year. The call comes ahead of the EPA’s annual meeting to be held next week in South Korea.

The letter makes the case for the EPA to start a process that will lead to an important and necessary expansion of the scope of risks that the Equator Principles (EPs) set out to manage. It calls on the Association and signatory financial institutions to strengthen their commitments in the realms of climate and energy, nature and biodiversity, human and Indigenous rights, and pandemic prevention.

After many years of engagement with the EPA, and most recently a civil society call to implement concrete actions on climate, biodiversity and human rights in the lead up to the climate and biodiversity summits in Glasgow and Kunming, civil society has been disappointed with the lack of ambition shown by the Association and its members. The response received from the EPA Steering Committee following the previous annual meeting fell far short of meeting the urgency of the multiple risks and crises of these times. In the meantime, the global situation has only worsened and immediate action to tackle the multiple crises with which we are confronted is needed now more than ever.

Civil society have formulated clear commitments that need to be made by the Equator Principles before their 20th anniversary in June 2023 that would ensure the Principles remain an effective framework for managing environmental and social risks in project finance. These include an end to the financing of fossil fuel projects and of projects located in highly biodiverse areas under the Principles, the full respect and protection of human and Indigenous rights, requirements for ‘pandemic risk assessment’ and establishing an initiative-level grievance mechanism.

The Equator Principles are an environmental and social risk management framework with over 130 signatory financial institutions across 38 countries. They were launched nearly twenty years ago as a framework for adopting institutions to ‘effectively identify, assess and manage environmental and social risks when providing project-related finance’. Since then, there have been four iterations of the Principles, with the most recent coming into effect from October 2020.

Within this time the world has seen the rapid acceleration of the climate crisis, continued destruction of the planet’s remaining intact ecosystems, continued threats to Indigenous and other communities, and more recently the emergence of Covid showing the risks of facing ever new pandemics. The open letter argues that the Principles have not done enough to tackle these global crises and, in fact, many of the projects financed under the Principles over the past twenty years have directly contributed to the worsening of these crises which leads to ever growing global risks.

Hannah Greep, Banks & Nature Campaign Lead, BankTrack: "The Equator Principles Association likes to call the Principles the ‘gold standard’ for managing project-related financial risks, however they are woefully ill-equipped to manage the impacts of those projects on both people and the planet. Financial institutions should not forget that their business depends on well-functioning societies embedded in stable ecosystems, which are being increasingly jeopardised by finance for projects that undermine these. That is why we are calling upon the EPA to take urgent actions between now and its 20th anniversary in June next year.”

Osprey Orielle Lake, Executive Director, Women's Earth and Climate Action Network (WECAN): "The Equator Principles Association continues to avoid addressing risks to climate, biodiversity, and human and Indigenous rights. For the Principles to be relevant,  they need to align with and adhere to the targets of the Paris Climate Agreement as well as the IPCC and IEA statements that there can be no more fossil fuel expansion. We can no longer risk or sacrifice biodiverse ecosystems or frontline communities. In the lead up to its 20th anniversary, the EPA must show its leadership and dedication to ecological sustainability and respect for human and Indigenous rights, as we face the unprecedented challenges of a world plunging further into climate and ecological crises."

Edit: On November 9, 2022 the EPA responded to BankTrack and colleagues with an open response published on their website. You can read the response here.