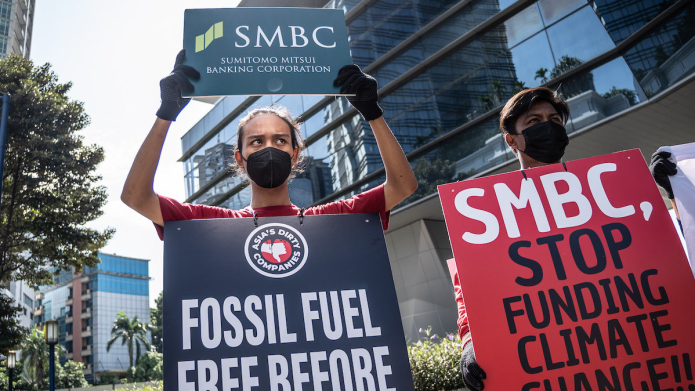 A global action was held to demand that Sumitomo Mitsui Financial Group (SMBC Group) cease its support for fossil fuels, deforestation, and human rights abuses, as the company continues to invest in projects that lead to climate crises such as fossil fuels and deforestation. The global action was held from late May to early June, about a month before the SMBC Group’s annual shareholders meeting, in front of the SMBC Group headquarters in Marunouchi, Tokyo; Manila, Philippines; Jakarta, Indonesia; Nairobi, Kenya; the Netherlands, the United Kingdom, and the United States. The action was carried out by volunteers and environmental groups from various countries.

The global action is fuelled by the following facts:

Environmental NGOs and individual shareholders have been working on shareholder proposals demanding that SMBC Group strengthen its climate change measures, and attention is now focused on the outcome of the June 29th shareholders' meeting.

Comments from participants in the global action

Lidy Nacpil, Coordinator, Asian People’s Movement on Debt and Development (APMDD): "The SMBC Group’s current policy is not consistent with the Paris Agreement’s goal of keeping global temperature rise to below 1.5°C. We are calling on SMBC shareholders: Take action to stop all financing for coal, gas and oil now. The world is watching you. We cannot have any more new fossil fuel projects and all existing ones must be rapidly phased out if we want to keep global warming at the lowest level possible.”

Susanne Wong, Asia program manager at Oil Change International in San Francisco, said: “Activists from across the globe are participating in this week of action to demand that SMBC Group stop banking on climate chaos. No more empty words and false solutions. SMBC Group must stop financing fossil fuels and harming communities and our planet.”

Henrieke Butijn, climate campaigner and researcher at BankTrack in the Netherlands, said: “Far from facilitating a Just Transition, SMBC Group’s new climate policy is still full of loopholes and highly insufficient to meet the 1.5 ℃ target. The bank lags far behind global peers and those peers haven’t even set the bar very high. SMBC should act on the climate crisis, starting with ruling out finance for EACOP and embracing the shareholder resolution filed by 350Japan, MarketForces and others.”

Omar Elmawi, coordinator of the #StopEACOP Campaign in East Africa, said: “SMBC has to stop being accomplices to fossil fuel projects, their climate policy does not take the climate crisis seriously as it sides with fossil fuel barons and puts profits to shareholders before people. A case in point is their involvement in the East African Crude Oil Pipeline as one of the key financial advisers. This is a project that is putting everything we hold dear at risk. From the People, to Nature and Climate. Yet SMBC is still in cahoots with TotalEnergies and China National Offshore Oil Company to construct this disaster of a pipeline.”

Charity Migwi, Africa regional campaigner at 350.org in Nairobi, said: “It is a shame for SMBC to profit from the misery of already vulnerable Africans. By organizing finance for the East African Crude Oil Pipeline (EACOP), SMBC Group will be fueling the climate crises further, contributing to environmental destruction and human rights abuses. Instead, the bank should invest in a just transition to renewable energy in Africa.”

Aina Koide, a Japanese citizen in Tokyo Japan, said: “I feel a strong sense of urgency and fear. The climate crisis is not only a future problem; it is a problem that is happening right now. It is essential to change the financial flow to stop climate crisis. SMBC Group needs to make a best effort to become a leader in investing in renewable energy, not in fossil fuels."

*Photos and videos of actions around the world are available here. (more to be uploaded)