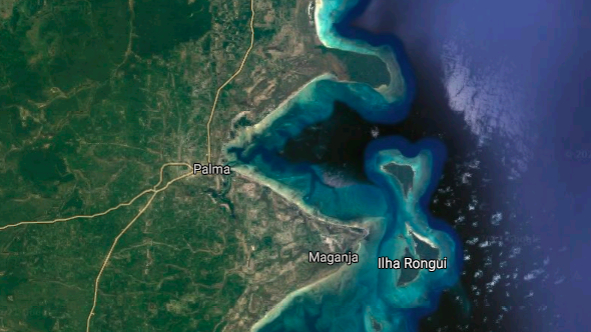 The Rovuma LNG Natural Gas project plans to liquefy and market 15.2 million tonnes of LNG per year from three reservoirs in Area 4 of the Rovuma Basin off the Cabo Delgado Coast in North Mozambique. Area 4 comprises the Mamba Gas Field and the Coral Gas Field; this project focuses on extracting gas from the Mamba Gas Field, which will then be sent to the onshore Afungi LNG Park complex to be processed. A new 45-kilometer subsea pipeline will be constructed to transport the extracted gas to the Afungi site. There are also plans to construct a dock and jetty to accommodate LNG carrier ships and to build Two airstrips, one temporary and one permanent.

A joint venture, Mozambique Rovuma Venture (MRV), owned by ExxonMobil (40%), Eni (40%) and CNPC (20%), holds 70% of the interest in the Area 4 contract, while Galp, KOGAS, and Mozambique’s state entity responsible for petroleum products, Empresa Nacional de Hidrocarbonetos (ENH), hold 10% each. The construction and operation of the offshore facilities will be undertaken by Eni, while ExxonMobil will lead the construction and operation of the onshore liquefaction and associated facilities.

The estimated cost of the project stands at USD 30 billion.

In the present day, with the world gearing towards zero emissions, a new project that produces and exports an enormous amount of fossil gas is unacceptable and irreconcilable with the goals of the Paris Climate Agreement. A large number of plant and animal ecosystems will also be threatened if the project goes ahead. Furthermore, the project will have considerable social and human rights impacts, including displacing thousands of people.

Banks and other financial institutions should avoid financing the Rovuma LNG project due to its severe adverse impacts on human rights, the environment and climate change.

Forced displacements The potential for the gas industry in Cabo Delgado region was discovered in 2007. Since then, hundreds of families from rural communities residing in the area have been forced away from their homes in order to build onshore facilities for the multiple LNG projects that have been planned. 556 families have already been displaced and it is expected that more than 2,000 families will be forced to relocate in the near future.

The Rovuma LNG project also forces people away from their sources of livelihood, since most of the families depend upon agriculture and fishing in the area for sustenance. With the literacy rate in the region being very low, there are also no formal employment opportunities for the rural communities.

The project will also permanently displace more than 2700 people in the Afungi Project Site (see project EIA page 16), and access to collective natural resources like forests, floodplains, and grasslands will be permanently lost to local people due to the land requirements for the project.

Impacts on community health Major impacts to community health (see project EIA page 17) will arise due to project activities. The site is expected to generate huge amounts of polluting sulphur dioxide. With the influx of project workers, there will be an increased risk of transmitting the COVID-19 virus, thereby putting the entire community in a highly vulnerable position. This has already happened in the areas surrounding the Mozambique LNG project.

Militarisation Over the past two years, the government of Mozambique has been deploying increasing numbers of  military personnel in the Cabo Delgado area. This is in part happening because of an agreement between Total and the government related to the separate Mozambique LNG project wherein the government provides troops for the protection of the LNG projects. Local communities report living in constant fear of being mistreated by the military.

The Environmental Impact Assessment (EIA) for the Rovuma LNG Project put forward by ExxonMobil and initially commissioned by Anadarko (part of a joint EIA of area 1 and area 4 of the Rovuma Basin) charts out all kinds of environmental impacts that can be expected in the project’s construction and operational phases. Some of the key impacts are explained below.

Impacts on climate The project EIA estimates that if the pipeline is operational, it would increase Mozambique's global contribution of greenhouse gas emissions (see project EIA page 14) by up to 10% per year. Increased emissions of harmful sulphur dioxide will also occur upon expansion of the facility, which will have adverse impacts on air quality.

Impacts on biodiversity If construction activities commence at the Palma Bay area, dredging will cause a considerable impact to seagrass, coral reefs and the organisms that depend on them. Dredging and cutting also leads to the deposit of sediments on these fauna, which can take a lot of time to recover. Construction activities will also lead to an increase in noise pollution in the area, which would adversely affect fish, dolphins, turtles and whales.

The project also has the potential to affect the Quirimbas National Park area, which spans across Cabo Delgado and is home to a large amount of biodiversity including endemic plants, animals such as lions, elephants, leopards, and a rich marine ecosystem including turtles, dolphins and sharks.

Impacts on soil Impacts on soil will be seen during the construction phase, as sites need to be cleared which would lead to the loss of topsoil. Moreover, heavy machinery and drilling can permanently affect the quality of soil if not used properly.

The Rovuma LNG Project has an estimated cost of 30 billion US$, but the final invest decision date has not yet been finalised. Presently, the project has no known financers except for 1.5 billion US$ in political risk insurance from the United States' Development Finance Corporation.

14% ownership and a part of Mozambique Rovuma Venture

28% ownership and a part of Mozambique Rovuma Venture

Mozambique: ExxonMobil will only decide in investment in two years – Fitch

Impacts of LNG in Mozambique

In 2006, Anadarko Petroleum ( acquired by Occidental Petroleum in 2019) signed a natural gas and petroleum exploration contract with the government of Mozambique to eventually develop gas in Area 1, under the Mozambique LNG project. This also laid the foundations for the Rovuma LNG and The Coral South FLNG projects. The exploration and production contract for Rovuma LNG in Area 4 was also signed in 2006, and came into effect in the beginning of 2007.

The Mozambique LNG and the Rovuma LNG projects are closely related. Agreements were signed between the companies of both projects to jointly develop some of the onshore and nearshore facilities and to coordinate common natural gas reservoirs. A joint Environmental Impact Assessment (EIA) covering both projects was completed, commissioned by Anadarko. The EIA was approved by The Ministry of Coordination of Environmental Affairs of Mozambique in June 2014. While Anadarko sold its shares in the Mozambique LNG project to Total in 2019, cooperation between the project sponsors has continued. In 2020, Total and Exxon were even said to have talks about adapting their agreements to increase extraction from the gas fields.

The development and organisation plans for the project were put forward in July 2018, and approved in May 2019. In the third quarter of 2020 the US Development Finance Corporation approved a USD 1.5 billion political risk insurance deal to support the project’s development.

The estimated cost of the project is around USD 30 billion. The final investment decision was expected to happen in 2020 but has now been pushed to 2021.