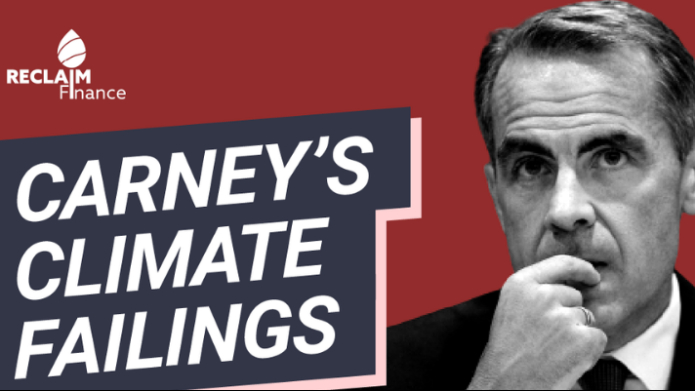 A new report from NGO Reclaim Finance criticizes leading private finance initiatives on climate change for failing both to address fossil fuel expansion and to enact reductions in absolute emissions (1). The implications are severe: together, these alliances cover some 300 leading private financial institutions globally (2), possessing assets of around US$ 90 trillion — equal to more than a third of the world’s investable capital.

As COP26 opens in Glasgow, the report calls into question the strategy being pursued by Mark Carney, the former Governor of the Bank of England and chief adviser to COP26 on finance. Carney leads the Glasgow Financial Alliance for Net Zero (GFANZ), an umbrella organization to which all these alliances have signed up. GFANZ requires its members to follow the criteria of the UN’s ‘Race To Zero’ Campaign, which do not even mention fossil fuels.

The result is that none of the six net-zero alliances analyzed – across banking, asset management and ownership, insurance, investment advice and data provision – mandates a halt to investments in fossil fuel expansion, the red line drawn by the International Energy Agency to stay under 1.5°C (3). Similarly absent are numerical limits on the use of offsets for meeting company emission reduction targets, and requirements that targets be set for reductions in absolute emissions.

Patrick McCully, author of the report and senior analyst for Reclaim Finance, commented: “The financial sector talks a big game on climate, but this report reveals its flagship initiatives to be fundamentally flawed. Employing weak metrics, ducking the hard questions of offsets and absolute emissions, and resolutely ignoring the elephant in the room that is fossil fuels, these financial alliances are failing to address the urgency of the climate crisis. COP 26 must signal a turning point for GFANZ and its members: away from foot-dragging and towards an end to financial support for fossil fuel expansion. If this really is the ‘finance COP’, Mark Carney & co need to lead from the front.”

The Race to Zero has warned of the dangers of ‘analysis paralysis’. This report, however, outlines how the Net-Zero Banking Alliance still permits its members up to three years to set all of their 2030 targets, and another year to disclose how they will meet all the targets. This means that JPMorgan Chase, a recent sign-up to the NZBA and the world’s largest fossil fuel banker, would have until 2025 to outline its plan to reduce emissions (4). Meanwhile, members of the Net Zero Asset Managers Initiative could conceivably wait until 2050 to set targets across all their assets under management.

The Net-Zero Asset Owner Alliance (NZAOA) is both the oldest and the strongest of the GFANZ entities. It has been described by the UN Secretary General as the “gold-standard” for the alliances. Still, it is condemned for failing to translate strong principles into obligations for its members. The NZAOA calls for an end to investments in new coal mines and power plants but does not mandate its members to implement policies to this end. Reclaim Finance’s analysis shows that, as of mid-October 2021, at least 34 of the 58 NZAOA members lacked a policy to restrict investments in coal developers. Only four were rated as having a robust coal policy (5). Moreover, the NZAOA fails, like the other alliances, to require targets for Scope 3 emissions from fossil fuel companies (6).

The report argues for the alliances, coordinated by GFANZ, to reorient their efforts to a rapid wind-down of financing for fossil fuels, in line with the International Energy Agency’s recent reports and with climate science. That means no financial support for new coal, oil or gas supply projects, and phasing out support to companies failing to scale down their fossil fuel production.

Bill McKibben, author and co-founder of 350.org, said: “An alliance on climate with no fossil fuel criteria in its guidelines is like an anti-smoking coalition which doesn’t address cigarettes. For as long as the financial sector fails to heed the IEA’s call to end support for new oil, gas and coal projects, its claims to climate leadership should be laughed out of the room.”

UPDATE: Following dialogue in recent days with NGOs, including around this report from Reclaim Finance, on November 1, GFANZ circulated a fact sheet that mentions several new commitments including “processes for removing members where necessary” and “accelerating the phase-out of fossil fuels in line with the science.”

McCully responded: “It is encouraging to see GFANZ and the Race to Zero embrace the need for sanctions processes and an accelerated fossil fuel phase-out. The net zero alliances must now incorporate robust requirements on 1.5°C-aligned fossil fuel phase outs into their criteria for financial institutions. Until this happens, the jury will still be out on GFANZ and its efficacy.”