Home › News
Westpac slammed over destructive fossil fuel funding at 2021 AGM
Westpac faced a formal proposal from shareholders that it commit to stop funding new fossil fuel projects at today’s annual general meeting (AGM). The bank’s board also received a barrage of tough questions over its continued funding for companies expanding the fossil fuel industry, including Santos and Whitehaven Coal.
By: Market Forces
2021-12-15 Share this page: 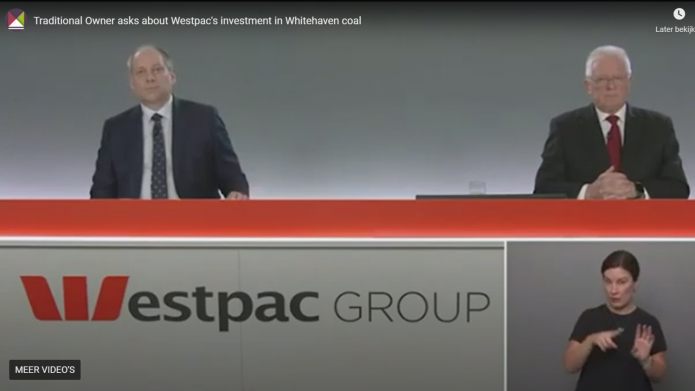 Despite updating its climate policy throughout the year, Westpac failed to align either its policies or practices with its stated commitments to the Paris Agreement and net-zero emissions by 2050. Instead, the bank carried on funding companies pursuing new climate- and community-wrecking fossil fuel developments consistent with the failure of Paris and net-zero.

This prompted not only a Market Forces-supported shareholder resolution calling on the bank to reduce its fossil fuel finance consistent with net-zero by 2050 and stop funding new fossil fuel projects, but a barrage of questions from shareholders, Traditional Owners, activists and fossil fuel project-impacted communities regarding the bank’s ongoing funding for fossil fuels.

In May 2021, the International Energy Agency (IEA) concluded that reaching net-zero greenhouse gas emissions by 2050 means “there is no need for investment in new fossil fuel supply”. Far from adopting a policy that rules out funding for new fossil fuel projects, Westpac instead made minor tweaks to its climate policy throughout this year that were so meagre and timid they barely warrant mentioning.

In the same month as the IEA’s net-zero report was released, Westpac could only bring itself to say it ‘expects’ new oil and gas customers “to have publicly disclosed Paris-aligned business goals”. Given this is an expectation rather than a requirement, and that Westpac already has more existing oil and gas clients than it can poke a stick at (let alone new ones), this policy will have no material impact on the bank’s lending. The bank now intends to wait another 2 years before establishing Paris-aligned criteria for its oil and gas sector funding.

Westpac then went on to continue funding companies expanding fossil fuels. In September it co-arranged a US$ 565 million credit facility in September for Oil Search, which has been planning to increase oil and gas production by 80% from 2020 to 2030, involving plans to spend billions on new development projects. In the same month, it participated in a US$ 600 million loan for major oil and gas producer Beach Energy, which plans to almost double its FY21 production by FY24, including new projects in the Otway and Perth basins.

Given these deeply insufficient steps, Market Forces supported a shareholder resolution pushing Westpac to reduce fossil fuel finance consistent with net-zero by 2050 and to stop funding new fossil projects. Investors managing or owning 12.85% of Westpac’s shares—representing US$ 9.9 billion of investment—supported the resolution, clearly signalling the bank must address the shortcomings in its approach to climate change.

However this also suggests many investors failed to live up to their own net-zero commitments by supporting the resolution. Any investor claiming to commit to net-zero by 2050 must realise this means no expansion of the fossil fuel industry, and therefore back calls for that outcome. Unfortunately, many super funds would have used members’ money to block this critical climate action.

Westpac has publicly championed the Paris Agreement, which aims to limit global warming to 1.5°C compared with pre-industrial levels. It has also committed to the global goal of net zero emissions by 2050, even though the current state of climate science means we should be aiming for net-zero emissions far sooner.

“There is no need for investment in new fossil fuel supply”

Yet Westpac has continued pouring funding into companies pursuing new fossil fuel projects, and remains open to funding them moving forward. Not only are these companies wrecking our climate, in many cases they’re also harming local environments and communities, and today Westpac heard from those impacted.

Despite the IEA’s conclusion that “no new coal mines or extensions of existing ones are needed in the as coal demand declines precipitously”, Whitehaven plans to spend around US$ 2 billion on three new coal mines and expansions: Vickery, Narrabri Stage 3 and Winchester South. To justify these plans, Whitehaven refers to coal demand scenarios consistent with catastrophic global warming of almost 3ºC.

Westpac failed to say when it will stop funding Whitehaven, instead referring to its commitment to exit thermal coal mining by 2030. Of course, continuing to fund Whitehaven through to 2030 would be just as reprehensible as the havoc Whitehaven’s dirty coal projects would wreak between now and then.

Sally Hunter, a cattle farmer from Gomeroi country in NSW and Relationship Manager at Lock The Gate Alliance, attended the AGM to quiz Westpac about its funding for Whitehaven. Sally’s property is situated near Whitehaven’s Narrabri coal mine, and she has witnessed first-hand the company’s environmental destruction and law-breaking. In November, Whitehaven was fined by the NSW Land and Environment Court for illegally taking one billion litres of water between 2016-2019. Sally asked the bank when it will halt financing environmentally and socially reprehensible companies such as Whitehaven Coal.

The answer from Westpac’s Chairman John McFarlane didn’t include a denial of any information put forward by Sally, or that Whitehaven is environmentally and socially reprehensible. However, the answer was blunt a dismissive, with McFarlane telling Sally and shareholders “you know the answer, it’s by 2030”. Watch the interaction below:

In November 2020, Westpac loaned US$25 million to Santos, a major oil and gas company whose business plans are wildly inconsistent with the Paris Agreement. While analysis finds limiting global warming to 1.5°C means production of oil and gas production must fall by 4% and 3% (respectively) annually from 2020 to 2030, Santos plans to increase production by 9% each year over a similar time frame. These plans include spending US$ 4.5 billion on oil and gas growth projects over the next five years.

Santos is also pursuing the highly opposed Narrabri Gas Project in NSW, which expert reviews found would have potential impacts on Aboriginal cultural heritage, water, and wildlife, as well as economic and social impacts. Members of the Gomeroi Nation, the Traditional Owners of the Narrabri region, fear the project would destroy sacred sites including the Great Artesian Basin. These concerns, among others, have compelled Traditional Owners and supporters to gather in the hundreds across capital cities to protest the project.

Farmers are also gravely concerned about the impacts of Santos’ coal seam gas project on the Great Artesian Basin; a valuable water source, and the project is strongly opposed by the NSW Farmers’ Association. Local stock and station agent David Chadwick raised Westpac’s funding for Santos, and asked when the bank will commit to stop funding companies proposing and developing dangerous CSG operations. Watch David’s question below:

The answer from Westpac’s Chairman John McFarlane was very confusing, telling shareholders Westpac could have shorter AGMs “by not having this exposure at all”. In other words, instead of accepting responsibility for its funding of destructive companies, Westpac believes a viable solution might be to fob off shareholders’ concerns entirely. He also painted Westpac as being a victim, caught between calls from those who want faster emissions reductions and those who don’t, telling shareholders “whatever we do, we’re going to be in trouble with someone”. This is despite Westpac having first stated its support for the Paris Agreement way back in 2015, meaning it should well and truly have already stopped funding fossil fuel expansion.

Mr. McFarlane also told shareholders “we’re doing reasonably well” because “we do have targets and they’re Paris-aligned”. This is despite the fact Westpac has not committed to stop funding expansion of the fossil fuel industry, nor does it have a target to reduce oil and gas exposure consistent with limiting warming to 1.5°C.

When will Westpac take action?

According to analysis from Market Forces, since 2016 Westpac has loaned over $2 billion to 14 companies developing new or expanded fossil fuel projects. In light of Westpac’s commitment to the Paris Agreement and net-zero by 2050, Market Forces’ Australian Campaigns Coordinator Jack Bertolus asked Westpac when it will stop funding companies with business plans consistent with the failure of these climate goals.

Instead of answering the question directly, Chairman John McFarlane pointed to the fact that Market Forces would have an opportunity to speak to a climate-related resolution later in the meeting. This, of course, didn’t preclude the question being asked when it was. Instead of being sensitive about when it receives questions, Westpac should focus on bigger issues such as the systemic risk climate change poses to its own business, as well as the global environment and economy. Watch the full exchange below:

Julien Vincent, Executive Director of Market Forces, subsequently noted the inconsistency between Westpac’s expectation that any oil and gas clients which are new to the bank must have published Paris-aligned transition goals, and the bank’s intention to wait another 2 years before establishing Paris-aligned criteria for its existing oil and gas clients. Julien asked why the bank intends to wait so long before establishing this criteria, and why Westpac doesn’t hold the same Paris-aligned expectations for its existing clients.

Instead of answering the question, Chairman John McFarlane told shareholders that the question did not related to financial reporting, even though Westpac itself acknowledges climate change is a material risk to its business. CEO Peter King then reiterated to shareholders for the umpteenth time that it’s “doing the work now” to establish Paris-aligned criteria for fossil fuel sectors including oil and gas, despite the fact that Westpac has had more than 6 years to do so (Westpac first expressed support for the Paris Agreement in late 2015).

Despite findings that global oil and gas production must decline annually by 4% and 3% (respectively) in order to limit global warming to 1.5°C, between 2020 and 2021 Westpac’s exposure to the retailing and distribution of oil and gas increased by 60% (from US$ 1.3 billion to US$ 2.1 billion).

A shareholder asked the bank what’s driving that increase, and whether the bank intends for its exposure to decline across all oil and gas sub-sectors moving forward, consistent with its commitment to the Paris Agreement.

Regarding Westpac’s exposure across all oil and gas sub-sectors, Chairman John McFarlane told shareholders “we do expect them to decline” while CEO Peter King said “as the Chairman said these areas will be reduced down“, although Westpac has failed to set formal targets to ensure this decline begins imminently and occurs in line with the Paris Agreement. Regarding the increase in exposure to oil and gas retailing and distribution, CEO Peter King told shareholders this related to one particular large ‘merger and acquisition’ transaction that didn’t end up going ahead. Watch the full interaction below: