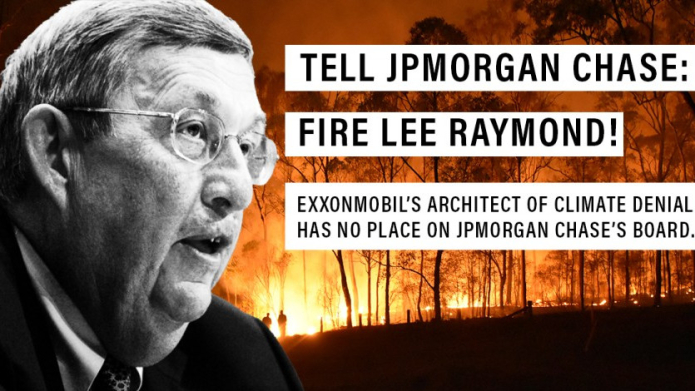 Bowing to pressure from climate and shareholder activists, JPMorgan Chase will be demoting former Exxon CEO Lee Raymond from his Lead Independent Director position on the bank’s board. The news was buried in a filing with the SEC released on Friday.

Stop the Money Pipeline, a coalition of over 100 groups working to pressure Wall Street institutions to stop financing fossil fuels, have been pressuring JPMorgan Chase for months to kick Raymond off the board entirely.

Tens of thousands of activists with organizations such as the Sierra Club, Friends of the Earth and others have sent messages in recent months calling on Chase to remove Lee Raymond from the board. Tens of thousands more have sent messages to Chase’s largest shareholders — BlackRock, Vanguard, and State Street — to vote against Lee Raymond at the bank’s upcoming annual general meeting.

“Shareholders have demanded that JPMorgan Chase be held accountable for its failure to address the systemic risks presented by climate change, and the announcement to remove Raymond from the lead independent director position is a clear victory for long-term shareholder value and the mitigation of climate risk. JPMorgan Chase shareholders will be best served when Raymond is removed from the board entirely”, said Eli Kasargod-Staub, executive director of Majority Action.

On April 24, Bill McKibben, an environmental author and a leader of the Stop the Money Pipeline campaign, wrote an editorial in the New York Times calling for Chase shareholders to vote against Raymond at the bank’s upcoming shareholder meeting.

McKibben reacted to today’s news by saying, “This is the man who, more than any other, exemplifies the fossil fuel industry’s decades of climate denial. That he’s retreating under pressure from the climate movement is a moment of real historical significance.”

The effort to remove Raymond from the board gained an important ally when NYC Comptroller Scott Stringer announced that he would be urging JPMorgan Chase shareholders to vote against Raymond’s re-election. The comptrollers of Pennsylvania and New York state soon followed his lead.

“This move helps ensure improved oversight of the board and the company’s long-term strategy when it comes to transitioning to a low carbon economy. But our work does not stop here”, said Comptroller Stringer.  “JPMorgan has been the largest global lender and underwriter to the fossil fuel sector, providing USD 269 billion in financing to fossil fuel expansion from 2016 to 2019. The company needs to move away from financing the dirty fossil fuels of the past and toward the big, strategic clean energy investments of the future. There must be no place for a climate change denier and former Exxon CEO on JPMorgan’s board.”

Stop the Money Pipeline is celebrating today’s news as a win, while vowing to keep up pressure on JPMorgan Chase to kick Raymond off the board entirely and move forward on climate. JPMorgan Chase is the world’s number one banker of fossil fuels, having dumped over USD 268 billion into coal, oil and gas since 2016 according to the Banking on Climate Change report.

Members of the Stop the Money Pipeline Coalition reacted to the significance of today’s announcement:

“Lee Raymond’s demotion is a testament to the power of the growing movement calling on Chase to get its act together on climate”, said Sierra Club campaign representative Ben Cushing. “Removing one of the world’s leading climate deniers from the bank’s Lead Independent Director position is a sign of progress. Our movement will keep up the pressure to vote him out entirely and push Chase to stop the flow of money to the polluters driving the climate crisis.”

“My family lost everything in Sandy, which was a climate change disaster. More than maybe any other corporate executive, Lee Raymond is responsible for climate change. JP Morgan Chase should clean up its dirty act and its shareholders should boot this climate denier off the bank’s board of directors, not just sideline him as lead independent director”, said Rachel Rivera, a Sandy survivor and member of New York Communities for Change.

“The ousting of Lee Raymond from his leadership role on the JPMorgan Chase board is a historic win for climate activists against the fossil oligarchs and climate deniers who once held sway over Wall Street”, said Paddy McCully, Climate and Energy Program Director of Rainforest Action Network. “JPMorgan Chase shareholders now need to vote Raymond right off the bank’s board and vote for the resolutions that would force Chase to reckon with the reputational damage  from its tar sands and Arctic oil and gas financing, show how they will align with the Paris Agreement, and stop Jamie Dimon from being his own boss due to his positions as both CEO and board chair.”

“Lee Raymond’s demotion loosens Big Oil’s stranglehold on Chase, another signal that the power of the oil industry is waning.  But Raymond’s tenure at Chase not over until this climate-denying  fossil fool is kicked off the board completely”, said Doug Norlen, Director, Economic Policy Program, Friends of the Earth U.S.

“It’s a good step, but let’s remember that Lee Raymond bears criminal responsibility for the climate crisis. The fact that he isn’t being removed from the board entirely shows where Chase’s priorities remain”, said Alec Connon, 350 Seattle.

“People power got us to this point and people power is what will eventually force JP Morgan from its pedestal as the largest banker of fossil fuels in the world. There’s no place for a climate denying mastermind on the board of any bank. This is a first step in the right direction to clear him out. All JP Morgan shareholders should be paying close attention to this defensive move by the bank and vote to unseat Lee Raymond”, said Richard Brooks, Campaign Coordinator with 350.org.

“While the demotion of Lee Raymond is good news for climate progress at JPMorgan Chase, it does not absolve BlackRock of the need to demonstrate that it will actually act upon the climate commitments it made in January. To pass the climate test, BlackRock must vote pro-climate on resolution and board votes at JPMorgan, Chevron, ExxonMobil, and more”, said Moira Birss, Climate and Finance Director at Amazon Watch.