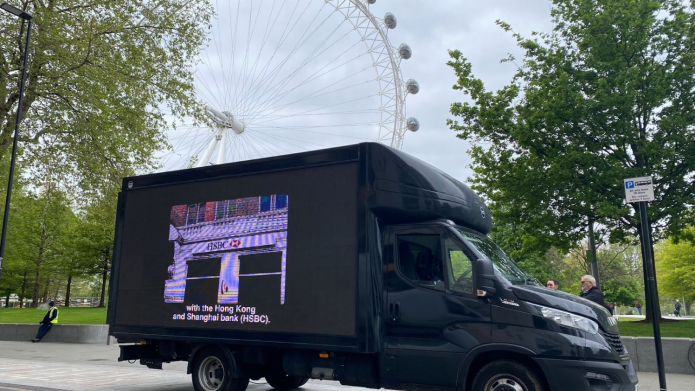 An ad van plays a video of Christopher, an 83-year-old man, who explains why he is leaving the bank after 65 years.. Photo: Market Forces

HSBC shareholders were confronted today outside the bank’s AGM on London’s Southbank by a huge van-mounted digital screen playing a video of one of its longest-standing customers explaining his decision to leave the bank over its fossil fuel financing.

After 65 years of banking with HSBC, he is now cutting ties with the bank because of its lack of progress on tackling climate change. In the video he explains, “I’ve got thirteen grandchildren. I know that I would not be able to look them in the eye because if I allow this to continue.”

Inside the AGM, shareholders will be peppering the bank’s board and senior executives with questions over its continued financing of fossil fuels. Some recent oil and gas deals by HSBC include:

Previous polling by Market Forces revealed that around 1 million HSBC customers in the UK are “very likely” to change banks over HSBC’s continued support for the fossil fuels industry.

HSBC has an intimate relationship with the fossil fuel industry which, so far, the bank has refused to break from despite the urgent need to phase out fossil fuels if the world is to keep global warming below 1.5°C. The International Energy Agency (IEA) stated last year that having a 50% chance of the world achieving the goal of net zero by 2050 means no new coal mines, coal plants or oil and gas fields can be brought online. Despite this, HSBC is still financing the expansion of the fossil fuel industry, contradicting its own ‘net zero emissions by 2050’ pledge.

In February, Market Forces released analysis accusing HSBC of trying to con its own investors on climate change as the bank updated its climate policy.

Mia Watanabe, Campaigner at Market Forces, said: By continuing to finance fossil fuels, HSBC is not only ignoring its customers, but it’s ignoring science too.

If the bank truly believes in its own ‘Net Zero by 2050’ target, then it must follow the International Energy Agency’s pathway and immediately end its financing for the expansion of the fossil fuel industry” - otherwise it faces a customer exodus.