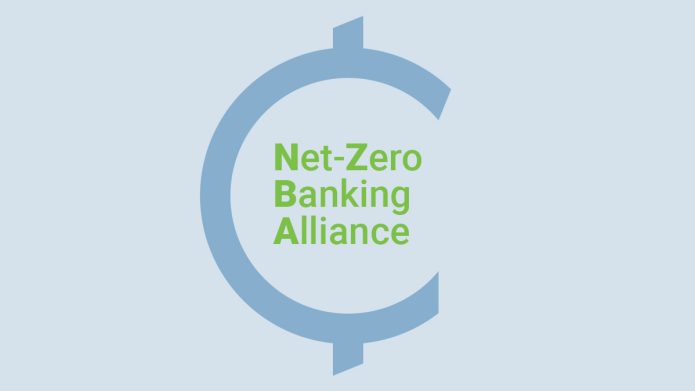 BankTrack is keeping track of whether individual NZBA member banks deliver on their stated commitments as part of the NZBA. Scroll down to the table below for details per bank.

The Net Zero Banking Alliance (NZBA), founded in April 2021, brings together a global group of banks, currently representing about 40% of global banking assets, which have committed to bringing down the emissions from their lending and investment portfolios to ‘net-zero’ by 2050. Banks that sign up to the NZBA commit the following:

Just how signatory banks must meet these commitments is further elaborated in the Guidelines for Climate Target Setting for Banks and the Frequently Asked Questions document.

The NZBA is convened by the UN Environment Programme Finance Initiative and acts as a coordination hub for the climate-focused element of the Principles for Responsible Banking.

GFANZ, in its own words, seeks to “expand the number of net zero-committed financial institutions and to establish a forum for addressing sector-wide challenges associated with the net-zero transition, helping to ensure high levels of ambition are met with credible action.”

GFANZ (and therefore all member alliances) is accredited to the UN Race to Zero (RtZ) campaign, a global UN-backed campaign that aims “to take rigorous and immediate action to halve global emissions by 2030 and deliver a healthier, fairer zero carbon world in time”. The Race to Zero campaign mobilises a wide range of initiatives, including from regions, cities, companies, educational institutions, hospitals, financial institutions and other sectors.

In June 2022, The RtZ campaign launched a new set of criteria that all members must adhere to, including GFANZ, and, therefore, NZBA members. These criteria are ‘requirements for all individual members to meet, below which members cannot fall if they wish to join and remain in the campaign’. The so-called Starting Line criteria demand all RtZ members to ‘’pledge .. to reach (net) zero GHGs as soon as possible, and by 2050 at the latest, in line with the scientific consensus on the global effort needed to limit warming to 1.5C with no or limited overshoot, recognising that this requires phasing down and out all unabated fossil fuels as part of a global, just transition” (emphasis added).

The accompanying interpretation guide clarifies that ‘phasing down and out’ means that ‘each Race to Zero member shall phase out its development, financing, and facilitation of new unabated fossil fuel assets, including coal, in line with appropriate global, science-based scenarios’ (emphasis added).’ The starting line criteria further demand that members set interim targets, publish transition plans and progress reports, and pledge to halt deforestation and protect biodiversity. Further detail on the application of the RtZ starting line criteria is provided in the ‘Interpretation guide’.

The launch of the new RtZ criteria in June 2022 set in motion fierce internal debate within NZBA on how the Alliance links to Race to Zero, with several US banks threatening to leave the initiative. As a result, GFANZ’s second  progress report, published in October 2022, and a subsequent statement of GFANZ, stated that its ‘’member alliances are encouraged, but not required, to partner with the Race to Zero‘’, with all alliances of GFANZ “independent initiatives subject only to their individual governance structures.” However, the progress report also states that these GFANZ alliances continue to be partners to the Race to Zero campaign, committing them to act according to their ‘’fair share’’ of the 50% cut in global CO2 emissions, in addition to the phase-out of fossil fuels.

Why is this important to track?

Since its launch, the Net Zero Banking Alliance has emerged as the central initiative claiming to align the banking sector with the 1.,5°C Paris climate goals. For most banks, ‘aligning with Paris’ means bringing down financed emissions to ‘net zero’ by 2050. But there are serious issues with this approach:

By tracking the commitments and actions of banks, BankTrack aims to ensure that signing up to the NZBA means that a bank will address its fossil fuel financing, starting with an immediate end to all finance for fossil fuel expansion, and will speed up target-setting for all other high emissions sectors.

BankTrack is keeping track of whether individual NZBA member banks deliver on their stated commitments as part of the NZBA. Click on the picture below for more details per bank. 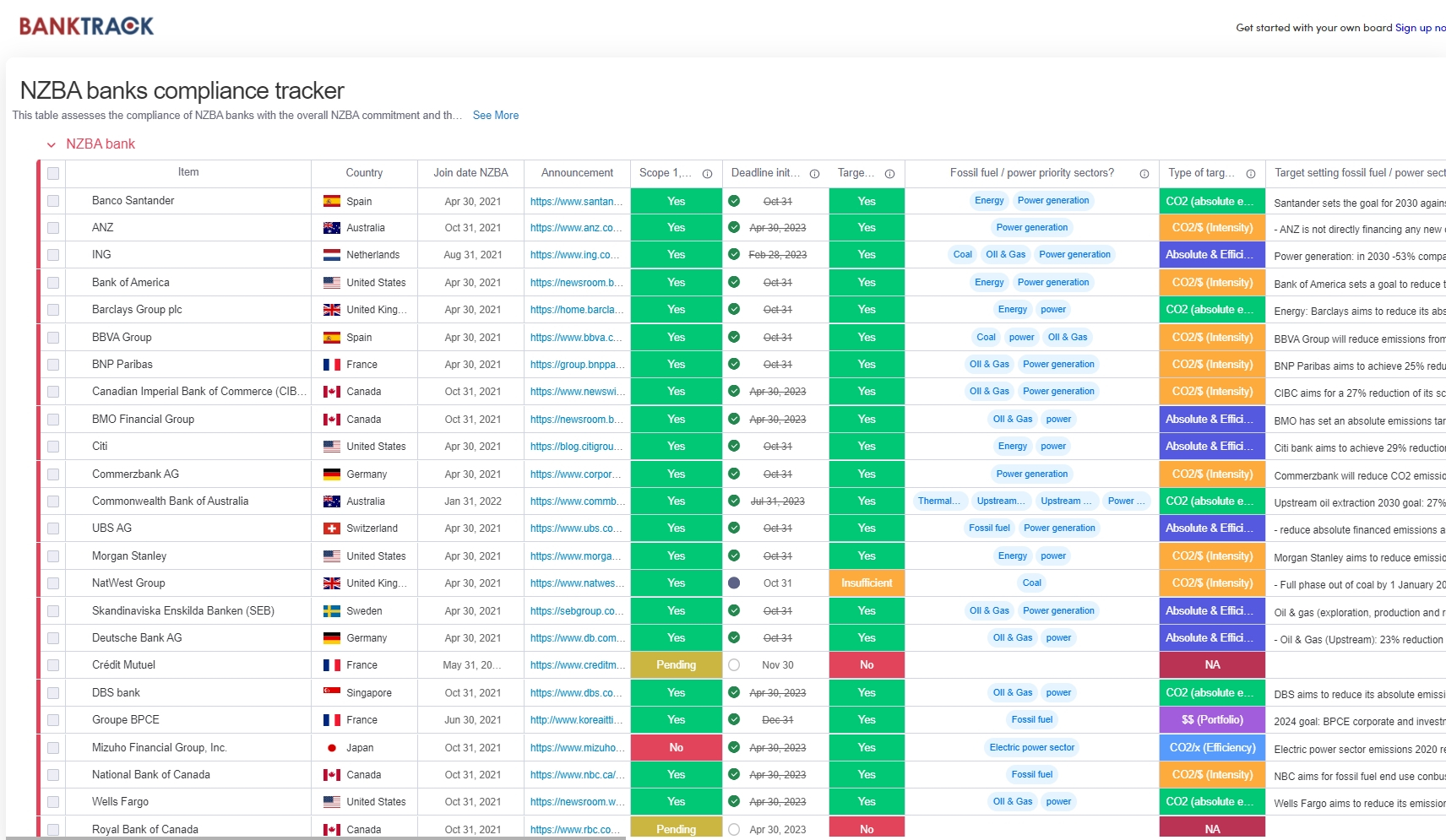 COP27 and banks: our wrap-up

Leadership does not equal GFANZ

NZBA after 18 months: A muddle of low ambition, non-comparable targets

Leaders or laggards? Report analyzes net-zero pledges of US banks

NZBA round 1: an assessment of banks' decarbonisation targets

Members of the Net-Zero Banking Alliance have started setting their first round of targets – but are these ambitious enough?
2022-10-31 | ShareAction
blog
external news
our news

Concerns raised as banks map own path to Net Zero

COP27 and beyond: An open letter from the NZBA Chair to members

GFANZ leaders give “personal view” against coal financing: they should make it official

Canadian banks will get kicked out of UN net zero club unless they up their game: Report

What Race to Zero’s new guidelines mean for Gfanz

Gfanz is in talks with Race to Zero about how to implement its updated requirements, but many questions remain.
2022-08-17 | CapitalMonitor
blog
external news
our news

Finance Watch calls for tightening of net-zero rules, warning that net-zero risks being discredited as a greenwashing tool unless it is clearly defined
2022-06-30 | Brussels, Belgium | Finance Watch
blog
external news
our news

GFANZ must tighten the screw on fossil fuel expansion

Dear Dr Carney, demanding an end to fossil fuel expansion is NOT “clickbait”

Carney and Bloomberg must show leadership to stop GFANZ dithering

HSBC's new 'Oil and Gas' and 'Power and Utilities' emission reduction targets do not cover emissions arising from its capital markets activities and include other loopholes.
2022-02-22 | ShareAction
blog
external news
our news

New Report: US banks and investors responsible for roughly the emissions of Russia

The announcement comes just days after the IEA released its annual World Energy Outlook, once again reaffirming that there can be no more fossil fuel expansion in a net-zero by 2050 scenario.
2021-10-15 | San Francisco | Sierra Club
blog
external news
our news

Dutch pension funds, insurers and banks not yet Paris-proof

The climate plans of the Dutch financial sector are totally insufficient to achieve the goals of the Paris Climate Agreement and they do not reflect the seriousness and urgency of the climate crisis. This is evident from new research by the Fair Finance Guide Netherlands
2021-09-30 | Amsterdam | Fair Finance Guide Netherlands
blog
external news
our news

COP27 and beyond: An open letter from the NZBA Chair to members

Our path to net zero

Statement on "No New Coal"

An assessment of the climate action plans of 29 Dutch companies and financial institutions
2022-07-05 00:00:00 | Milieudefensie
ngo documents

Letter to GFANZ for its 1st year anniversary

Letter to GFANZ chairs from Ukraine