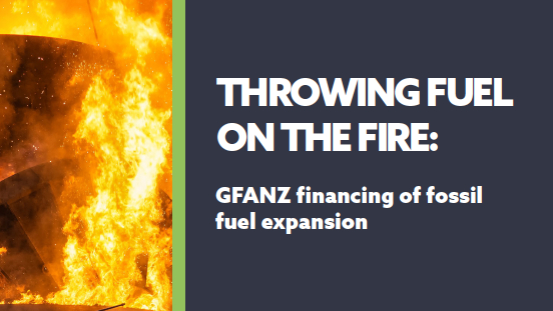 After committing to net zero by joining the Glasgow Financial Alliance for Net Zero (GFANZ), financial institutions, including HSBC and LGIM have continued pouring hundreds of billions of dollars into the companies developing fossil fuels, according to a new report published today by a group of NGOs, including Reclaim Finance and BankTrack, and endorsed by Make My Money Matter (1). As business and finance leaders meet in Davos for the World Economic Forum, the NGOs call on GFANZ’s sectoral alliances to insist their members stop supporting fossil fuel expansion. If they are serious about meeting their commitment to reach net zero by 2050 following a 1.5°C pathway, action is needed now to align in the short term with this science-based climate imperative.

The report analyzes support for the world’s largest fossil fuel developers from the financial institutions who are members of the sectoral alliances (2). It finds that:

In total, 229 of the world’s largest fossil fuel developers received finance from the 161 GFANZ members covered in this report (4), which will support them to develop new coal power plants, mines, ports and other infrastructure, as well as new oil and gas fields and pipelines and LNG terminals. These new fossil fuel projects are incompatible with the objective of limiting global warming to 1.5°C, as confirmed in the latest International Energy Agency’s World Energy Outlook, published in October 2022. They will lock in greenhouse gas emissions for decades, despite the adoption of decarbonization targets by some GFANZ members (5).

Lucie Pinson, Executive Director and founder of Reclaim Finance says: “The science is very clear: we need to stop developing new coal, oil and gas projects as soon as possible if we want to meet our climate goals and avoid a worst-case scenario. Yet, it is business as usual for most banks and investors who continue to support fossil fuel developers without any restrictions, despite their high-profile commitments to carbon neutrality. Their greenwashing is all the more damaging as it casts doubt on the sincerity of all net zero commitments and undermines the efforts of those who are truly acting for the climate.”

Even though ending finance for fossil fuel expansion is clearly essential to meet the GFANZ commitment to keeping warming under 1.5°C, none of its member alliances have  language that meaningfully addresses the issue in their guidelines.

The UN Race to Zero campaign - of which all financial institutions became signatories when joining GFANZ alliances - sets criteria for net-zero aligned financial institutions and other non-state actors. Since June 2022, these criteria have included an end to financing of new fossil fuel projects. While GFANZ has stopped demanding that its members join the UN Race to Zero initiative, the sectoral alliances remain Race to Zero partners and so committed to complying with its criteria. The November 2022 report of the UN’s High Level Expert Group on net zero has highlighted that credible net zero pledges must include an end to financial support for fossil fuel expansion (6).

Reclaim Finance Senior Analyst Paddy McCully said: “GFANZ members are acting as climate arsonists. They’ve pledged to achieve net zero but are continuing to pour hundreds of billions of dollars into fossil fuel developers. GFANZ and its member alliances will only be credible once they up their game and insist that their members help bring a rapid end to the era of coal, oil and fossil gas expansion.”

Maaike Beenes, Climate Lead at BankTrack says: ''The NZBA's own 2022 progress report showed that just about half of NZBA member banks have set 2030 financed emissions reduction targets for fossil fuel sectors, and banks that have set targets often don't apply them to major parts of their portfolios. It is therefore not surprising that despite claiming credit for their NZBA membership, most banks continue to provide shocking amounts of funding to the fossil fuel industry, the sector most responsible for the unfolding climate crisis.''

Tony Burdon, CEO at Make My Money Matter, who has endorsed the report, commented: "We know that financing for fossil fuel expansion is bad for the planet, contradicts any serious net zero commitment, and goes against the wishes of millions of savers who want their money tackling the climate crisis, not fuelling the fire.

“Yet staggeringly this report shows that our banks and our pension funds - underpinned by our money - continue to provide billions in finance to companies involved in such activity. This must change. Any financial institution who wants to be taken seriously on climate change must listen to the science, respond to their customers, and end their dangerous relationship with fossil fuel expansion."