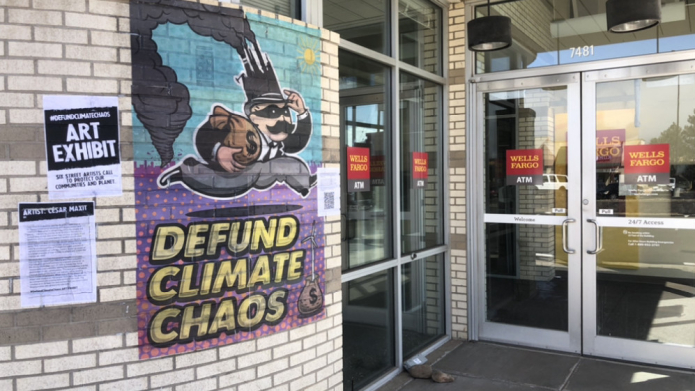 Ahead of COP 27, a new report by the Sierra Club’s Fossil-Free Finance campaign analyzes the financial sector’s net-zero emissions pledges two years in the making, revealing that the commitments and actions from the 6 biggest US banks fall far short of what’s needed to meet global climate goals.

With the Net Zero Banking Alliance (NZBA) expected to release an update at COP 27 on its members’ progress toward their net-zero commitments, this new report serves as a useful, critical analysis of US banks’ own net-zero commitments, interim targets, and exclusion policies, all summarized in one place. It also highlights the need for mandatory comparable disclosures of corporate climate commitments, which was feedback that many investors and advocacy groups gave to the Securities & Exchange Commission on its proposed climate risk disclosure rule.

The report focuses on the commitments of 6 US banks — JPMorgan Chase, Citi, Wells Fargo, Bank of America, Morgan Stanley, and Goldman Sachs. All 6 banks pledged to reach net-zero financed emissions by 2050 and are members of the Net Zero Banking Alliance. The report looks at the banks’ interim 2030 targets for the oil & gas and power generation sectors, and exclusion policies for high-risk sectors like coal and Arctic oil & gas. It also lists key standards for policies to be considered credible and robust.

Overall, the report finds banks’ progress remains limited in large part due to their continued financing of fossil fuel expansion. US banks are the biggest fossil fuel financiers in the world, with JPMorgan Chase, Citi, Wells Fargo, and Bank of America together providing a whopping quarter of the $4.6 trillion USD in global fossil fuel financing in the past six years alone. This financing comes despite calls from leading energy experts for no new fossil fuel projects to ensure the world reaches its climate goals.

“The science is clear that in order to reach net zero by 2050 — and help steer the world away from climate disaster — banks must stop funding fossil fuel expansion. But big US banks have fallen far behind the best practices of their global peers, setting only weak targets and policies riddled with loopholes that allow billions of dollars in new fossil fuels projects each year. If banks want to live up to their net-zero pledges, they need to commit to real emissions reductions and end financing for companies expanding fossil fuels,” said Adele Shraiman, Campaign Representative for the Sierra Club’s Fossil-Free Finance campaign.

The report details how the 2030 targets set by big US banks fall short of what is needed to achieve net-zero emissions by 2050, and establishes recommendations for credible and robust targets. Some of the most critical elements of robust 2030 targets include application to both lending and underwriting, use of a carbon dioxide equivalent metric to assess all greenhouse gas emissions, and high-quality data and methodology disclosures.

For the power generation sector, the report details why banks must demonstrate how their emissions intensity target will lead to an overall reduction in financed emissions on an absolute basis aligned with the UN Paris Agreement’s 1.5°C target.

The report also assesses the policies that inform the banks’ approach to financing certain high-risk sectors. Most notably, the vast majority of bank financing for oil and gas is in general corporate financing, not project financing, meaning that exclusion policies focused on project financing allow the banks to continue pouring billions into fossil fuels in places like the Arctic and in dirty energy sources like coal.

Across the board, the report finds that all six big US banks are severe laggards when compared to the best practices set by some of their international counterparts. It provides a suite of recommendations for banks to strengthen their interim targets and financing policies in order to reach their net zero by 2050 pledges. Among the most pressing recommendations are the need to cover both lending and underwriting, and extend exclusion policies to cover general corporate finance, rather than being limited to project financing.

“The yawning chasm between the stated climate commitments of the big US banks and their actual policies and targets lies in sharp contrast to the increasingly robust fossil fuel policies of many large European financial institutions. US banks should follow the lead of their European peers, rather than continue with the anti-science fallacy that expanding fossil fuel production is in any way compatible with a liveable climate,” said Paddy McCully, Senior Analyst at Reclaim Finance.

Dozens of European banks, investors, and insurers refuse to support most companies developing new coal projects, and financial institutions have begun to extend these policies to oil and gas companies. For example, French banks La Banque Postale and Crédit Mutuel have both suspended financial services to companies expanding oil and gas production. And many European firms have adopted stronger emissions reduction targets than the US banks, such as Swiss bank UBS, which is targeting a 71% reduction in its absolute financed emissions from oil and gas companies between 2020 and 2030.

Editor's notes:
Rainforest Action Network will release a report in November 2022 that shows how much banks have financed fossil fuel expansion since the Paris Agreement. BankTrack released a tool in October 2022 to track the commitments of all individual Net Zero Banking Alliance members. ShareAction released a report in February 2022 on European banks and net zero.