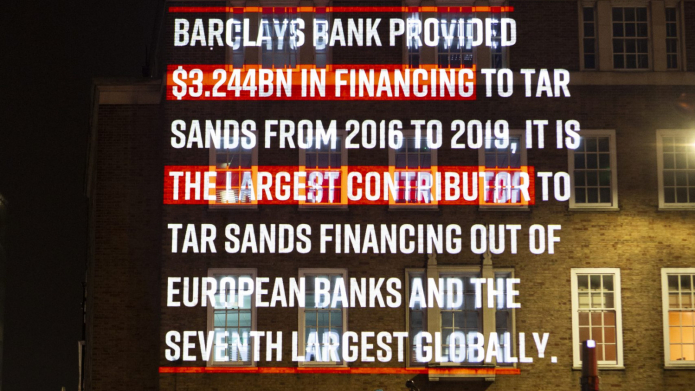 It’s been revealed that between January and September of this year, Barclays increased its financing of key fossil fuel players compared to the same period last year in spite of a commitment by the bank to align its business with climate goals.

Updated figures by Rainforest Action Network (RAN), which in partnership with other organisations produces the most comprehensive report on global banks' fossil fuel financing, show that in Q1 to Q3 of this year, Barclays provided $24.58 billion in underwriting and lending to major fossil fuel companies, including coal and tar sands companies, and oil and gas expanders. This is $200 million more than in the same period last year when this figure stood at $24.38 billion.

In March, Barclays committed to 'take a leading role in tackling climate change and help accelerate the transition to a low-carbon economy' with the ambition 'to become a net zero bank by 2050'.

In fact, on the same day as it made this announcement, it closed on a deal with major tar sands producer Enbridge, assisting in the provision of a $2.1bn loan to the company, data from Eikon shows. Enbridge is currently building a new pipeline, Line 3, which would be one of the largest crude oil pipelines in the world, carrying up to 915,000 barrels per day of tar sands crude – one of the most carbon-intensive fuels on earth.

This is in addition to being a key participant in 10 other loans or bonds issued by tar sands companies.

As for HSBC, Europe’s second largest fossil fuel financier behind Barclays, the figure is $19 billion. While the bank’s figures are technically down on the same period last year ($21.58 billion), RAN warns that this is likely a conservative measure. In any case, this does not represent a significant enough curbing of fossil fuel financing for a bank that is committed to becoming net-zero.

Alison Kirsch, Lead Researcher on RAN’s Climate and Energy Program, said: ''The numbers don't lie. Barclays' rhetoric about aligning its financing with climate goals is meaningless if in actuality it is doubling down on its complicity in climate chaos, including pouring billions of dollars into Enbridge, the company behind the disastrous Line 3 tar sands pipeline, one of the absolute worst actors driving fossil fuel infrastructure expansion.''

Adam McGibbon, UK Campaigner at Market Forces, said: ''HSBC and Barclays' climate hypocrisy knows no bounds. These banks claim to support climate action, but there is no climate action that involves pumping more money into the fossil fuel industry. HSBC and Barclays customers will be asking – 'do I want my money to be invested in destroying my future?'''

Johan Frijns, Director at BankTrack, said: ''Barclays and HSBC 'net zero by 2050' commitments are only worth their paper if this has rapid and deep consequences for their ongoing financing of the fossil fuel industry today. You cannot expect to be praised for making commitments for 30 years from now while continuing to pour billions into coal, oil and gas companies. Net zero by 2050 requires having a credible phase out plan for the entire fossil fuel industry in place before COP26 Glasgow latest.''