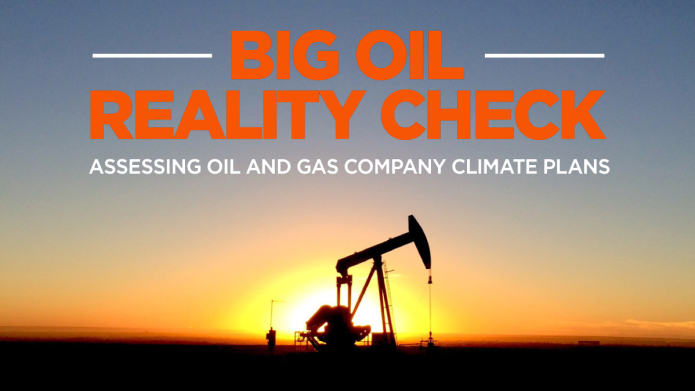 A new comprehensive analysis released today shows that not a single climate plan released by a major oil company comes close to aligning with the urgent 1.5ºC global warming limit. The discussion paper measures oil and gas company climate plans against ten minimum criteria for 1.5ºC alignment, underlining that commitments to stop expanding extraction and to significantly decline production by 2030 are critical near-term tests. It finds that each of the eight major companies assessed are failing, scoring grossly insufficient or insufficient in a majority of criteria.

“An arsonist pledging to light a few less fires is still an arsonist,” said Kelly Trout, senior research analyst at Oil Change International. “As families across the United States and around the world flee fires and floods supercharged by fossil fuel pollution, BP, Shell, and Total are still drilling us into a deeper climate emergency, and that has to stop before they can claim any credibility.”

The paper, titled “Big Oil Reality Check,” was released today by Oil Change International in collaboration with 30 organizations from across the globe. While some existing analyses have rated oil companies’ plans against each other, today’s analysis is the first to focus squarely on the level of ambition required for a 1.5ºC-aligned phase-out of oil and gas production.

The rubric includes ten minimum baselines to ensure proper ambition, integrity, and transition planning in the commitments, with a focus on stopping expansion and planning a significant decline in production by 2030. These imperatives have emerged as a new norm for fossil fuel producers and financial institutions, as seen in a new set of “Paris Principles” for the finance sector, issued last week by a global set of 60 climate and rights groups. Past Oil Change International research shows that even if global coal use were phased out overnight, the oil and gas reserves in already developed fields and wells could still push the world beyond 1.5ºC.

Notably, BP has received some plaudits for its recent announcements. BP took a critical step in the right direction as the first oil company to commit to reduce oil and gas production by 2030. However, when BP’s plan is held up against the ten criteria laid out in this analysis, it joins the rest of the industry in failing to meet the bar of what is required. In particular, BP’s plans omit the company’s stake in Russian oil giant Rosneft, meaning its announced production cuts could be less than 30% by 2030 when science indicates global carbon dioxide pollution must be halved in that time frame.

“Oil companies are responding to pressure from the public to get real on climate, but their response is, as ever, deceitful and geared toward protecting their bottom line,” said David Tong, senior campaigner at Oil Change International and lead author of the paper. “A critical reality check has been urgently needed, lest investors and the public be misled much in the way Big Oil has been misleading the public for decades.”

The report can be found here.