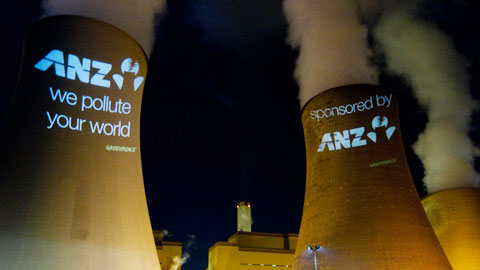 Tuesday 19th October - Greenpeace launched a new campaign to illuminate the role of ANZ as the biggest financier of polluting coal power in Australia.

Greenpeace activists projected a redesigned ANZ logo and tag line "We Pollute Your World" onto a cooling tower at Yallourn - the third most polluting power station in Australia and one of ten across the country financed by ANZ over the last five years.

A new report we commissioned exposed the role the big four banks play in propping up pollution. While Commonwealth, NAB and Westpac are all big dirty players, ANZ is the largest financer of coal in Australia.

Over the past five years, ANZ has poured nearly $1.6 billion dollars into coal infrastructure and is the biggest financier of coal power stations and coalmines.

This is despite ANZ topping the Dow Jones Sustainability Index for four years running and adopting a policy to be carbon neutral.

"ANZ have made much of its environmental awards," said Greenpeace campaigner, John Hepburn. "But these are meaningless if the bank continues to pour billions into financing pollution."

"We are at a major turning point," said Hepburn. "Today, we are faced with a new generation of 12 new polluting coal plants in the pipeline. That's why we are asking ANZ CEO, Mike Smith, to commit not to finance new coal power stations in Australia."

We're calling on ANZ to stand with the Australian community and make a commitment not to invest in new coal power. It has the power to lead us towards a clean energy future.